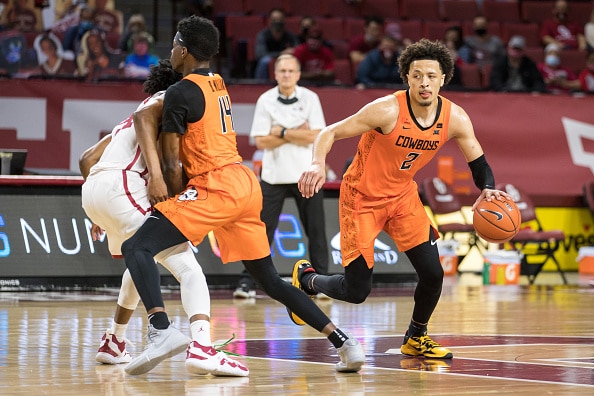 Undefeated no more. Baylor finally added a loss to the loss column on Saturday when they couldn’t beat KU on the road. Since the three-week pause, they’ve looked a little off, barely beating a 2 win Iowa State team and of course this loss to Kansas. Baylor is still a top 3 team in the country and should turn it around after two games back, but they’ll have an incredibly tough week against three Top 20 teams. They also lost their #2 overall seed with that loss, so a sweep this week could easily get them back in that spot.

Compared to the rest of the conference, West Virginia had a very easy week. They beat two of the three unranked teams from the Big 12, but a win is still a win. The resume is there, and if they can beat Baylor, Oklahoma State, and make it to the final of the Big 12 conference tournament, we could see this West Virginia team on the one line on Selection Sunday. This is a whole new team since 2021, and they can prove if they’re good enough to be ranked 6th in the country this week.

After the West Virginia loss in early February, the Jayhawks have been a completely different team. They have won 6 of their last 7, with their only loss being in overtime on the road to a Top 15 Texas team and a win against Baylor. David McCormack has developed throughout the season unlike anything we’ve seen before and Marcus Garrett is completely taking out team’s stars. For a down year, this team could still make the Final 4 which is terrifying. They have an easy game this week against barely .500 UTEP before conference tournament play.

The difference between four and seven in the power rankings is incredibly slim, but Texas gets the spot because of no bad losses in conference play and a better record than Texas Tech. Texas picked up a huge resume win on Tuesday when they swept Kansas for the season, even if this one was a lot closer than the last. The loss against Texas Tech was brutal, because that really would have solidified their resume. Texas has so many pieces, but they need to figure out how to work together like they did so well in the beginning of the season. They get two bottom feeders to end the season, but a big game against Oklahoma as well in a must win for both teams.

If a game against Oklahoma State goes into overtime, you might as well save everyone’s time and hand them the win. They are now 4-0 in OT this season, including two straight against two very good ranked teams last week. Cade Cunningham continues to prove his superstar status, this time with a 40 point masterpiece against Oklahoma on Saturday. They have a week of death next week, so this will be a good test to see how capable they are of going far in the NCAA tournament.

What a rough week for the Sooners. They had a “bye” game against the two conference win Kansas State Wildcats… and lost. Then, they had Oklahoma State come to their court and lost as well. For a team that looked like a two seed in the tournament, those odds are slowly falling away, but they will have a chance to redeem themselves. They get a highly anticipated rematch against Oklahoma State on Monday and then play the Texas team that they beat by just one point last time they played.

That win against Texas is so much more important than people realize. Having a losing record in conference play would have turned a lot of people off this team and hurt them big time. Now, at .500 in conference play, they have two projected wins left against TCU and Iowa State before that probably loss against Baylor, which would lead them 1 game over .500 in conference play. This Texas Tech team hasn’t shown recently that they are any better than the 7th best team in this loaded Big 12, so they have a lot of work to do before March 14th.

If TCU lost to Iowa State, which they nearly did, Kansas State would have jumped them for the first time this season. I also mentioned in previous power rankings that TCU just had to beat one of Iowa State and Kansas State to earn a winning record in the regular season, but after three ranked games were added to their schedule last week that no longer looks like the case. It seems like TCU is very unmotivated right now, and have already looked to the offseason.

When Kansas State had nothing to play for except pride, they welcomed the #7 team in the country into their arena and beat them for one of the biggest upsets of the season. For a team that only won one game in their first fourteen conference games, they have a chance to win three of their last four with their finale against Iowa State.

Iowa State keeps getting closer and closer to that conference win, but can never finish it off. They were leading Baylor at half, before the narrow loss, and they only lost to TCU by 4. They have actually played most teams very close, losing 8 of their 15 games by single digits. They’ll get their final chance on Saturday against Kansas State, who’s second worst in the Big 12.