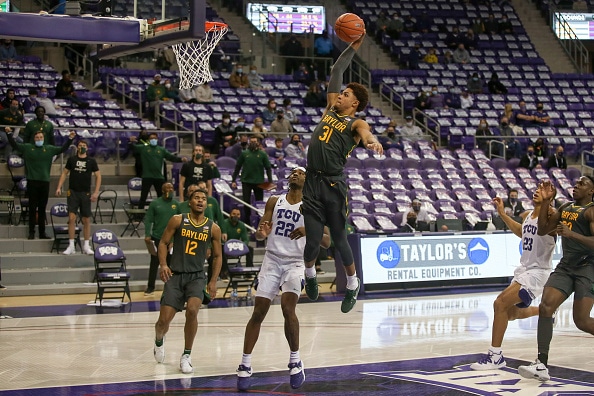 Texas just keeps adding more and more to their resume. A week after destroying Kansas on the road, they go on the road again and defeat West Virginia thanks to a last second three by Andrew Jones. Both games were close this week, with last place Iowa State surprisingly keeping it competitive, but a win is still a win. They will have one final test with a home game against Texas Tech before an easy rest of the month.

This week was finally going to be the week the Baylor Bears silenced the doubters with two top 25 games this week. Unfortunately, the West Virginia game was postponed due to issues related to COVID-19. Still, Baylor will travel to Lubbock to face a Texas Tech team that is trying to prove itself. This will be Baylor’s second most difficult matchup this season so it should be interesting to see how it goes.

This was an important week for Kansas after what happened the weekend before against Texas. They went on the road and absolutely owned TCU in a rout to boost their confidence. The Oklahoma game was closer than they would have liked, but they still came out with the win. The Oklahoma State game this week has the potential to be close, and then the Iowa State game should be an easy one.

As you’ve probably noticed, there isn’t a lot of movement in this week’s power rankings. All the teams that should have won did and other way around. West Virginia almost broke that when they went down 18 against Oklahoma State in the second half, but miraculously came back and won the game. The opposite fate happened on Saturday when they were leading Texas all of the second half until the very last second. West Virginia is still a great team and has proven in the last two games that even with the loss of Tshiebwe, who recently committed to Kentucky, they are still a contender in the Big 12. This Mountaineer team is definitely excited to have the Baylor game canceled, and will face a decent TCU team on Saturday.

Texas Tech had a very easy week, beating the bottom two teams in the Big 12 by double digits. Next week, they have the worst week arguably for any team this year. They will have to travel to Texas and face one of the strongest teams in the country and then try to beat one of, if not the best team in the country in Baylor. This week should say a lot about whether this team has any chance in the Big 12 race.

This was a tough week for Oklahoma, losing both games to two very good teams in Baylor and Kansas. They almost beat Kansas shorthanded on the road, so that is a very good sign that they can still compete and earn a spot in the NCAA Tournament. They have a much easier week this week, but still have two must win games against two middle of the pack Big 12 teams in Oklahoma State and TCU.

This one was very close between TCU and Oklahoma State, but OK State’s win against Texas Tech and near win against West Virginia this week put them ahead. This team is still playing hard despite not being eligible for the NCAA Tournament as of now and will continue to do so. They have two good matchups this week with Kansas and Oklahoma.

This was a rough week for TCU, losing badly to both these teams at home. They kept it close with Baylor, but weren’t able to hold on when they needed to. If TCU wants a chance to contend in the Big 12, and more importantly make the NCAA Tournament, they need to beat both these teams this week.

This Kansas State team plays hard and the upside for the future is there, but it won’t be this year with all the teams ahead of them just being better. They have another battle for the bottom matchup against Iowa State in which a win would all but certainly assert a not last place finish for Kansas State.

If Iowa State doesn’t beat Kansas State on Wednesday, there is a serious chance they finish without a win in conference play. They played Texas close, losing by only 6, but they should really focus on beating K State to earn some pride and put a win in the winning column.