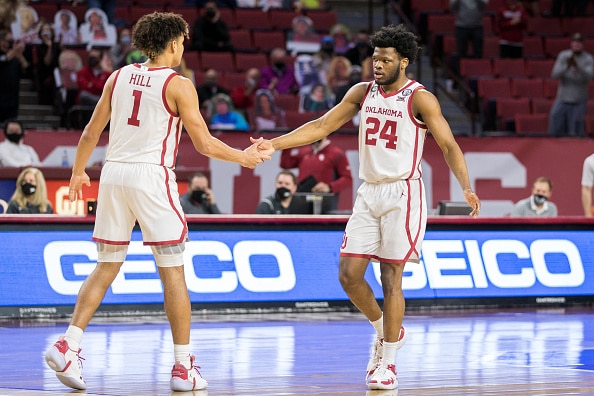 Baylor stays undefeated heading into the month of February with two more wins this past week. Their biggest test of the season comes on Tuesday, when they face sixth ranked Texas on the road. If they win that game, it’ll be tough seeing anyone beat them until they face Gonzaga in the final 4 or national championship. They also face TCU this week who are ice cold and shouldn’t be able to put up a fight.

Texas had a disappointing week, losing to Oklahoma at home and having their SEC/ Big 12 matchup postponed. In all fairness, Texas did not have star guard Courtney Ramey or Shaka Smart for those games and that clearly had an impact. Both will be available for their matchup against Baylor, where they can prove they belong in that final 4 conversation or if they are a tier 2 team. Oklahoma State later on could be a tricky matchup as well.

The hottest team in college basketball right now? The Oklahoma Sooners. They close the month of January with 4 top 10 wins, including three in a row and two this past week. The most impressive part was beating Alabama without their top player Austin Reaves, showing how good this team is and that they are one to beat in March. They have their final top 15 matchup of their 4 game stretch against Texas Tech before a much needed bye game against Iowa State.

This one was very difficult to pick between Texas Tech and West Virginia, but their last-second win against Texas Tech on Monday put them over the top. They suffered a big loss to a Florida team that is now ranked, but have built up a strong resume and have actually looked better with Tshiebwe gone and Culver with the paint to himself. They have a huge game against Kansas on Saturday to avoid a season sweep and continue to at least try to compete for a Big 12 title.

Just a week after stealing a game on a Mac McClung game winner against Texas, they have a game stolen from them on a Miles McBride game winner against West Virginia. They came back strong with their last game comeback against LSU, and still look like a top team in the country. Mac McClung is player like an All-American these past few weeks and was a huge reason why they won that LSU game. Texas Tech will get a big game against Oklahoma before an easy matchup against Kansas State.

Like West Virginia and Texas Tech, the difference between Kansas and Oklahoma State for this spot is slim, but Oklahoma State’s win against Kansas puts them ahead. They went undefeated this week, beating an Arkansas team that on the bubble now and an Iowa State team that can be debated as the worst Power 6 team. They get a TCU team that upset them the first time they played but both teams are in completely different directions since that game. They also play Texas, and they want to win to show the AP voters that they belong in the Top 25.

The coldest team in college basketball? The Kansas Jayhawks. After getting throttled by Tennessee, they have lost four of their last five games and don’t look like they’re in any ways turning that around. Hopefully for them, a game against rival Kansas State reignites that fire and leads them to victory. If they can’t do that, not only are they losing their chance at a Big 12 title, but breaking their historic streak of weeks ranked in the Top 25.

To use the word choke wouldn’t do justice to what TCU did against Missouri. Up 11 with 3 minutes left, TCU found a way to lose that game in overtime. They have now lost 5 in a row and look at this season solely as a way to develop their rising star, Mike Miles. Their schedule doesn’t get any easier, with two difficult matchups against Oklahoma State and Baylor.

Kansas State actually looked decent against Texas A&M and stayed competitive. Nijel Pack scored 26, which is a great sign for the freshman and for the Wildcats. They face their rival in Kansas this week followed by a home game against Texas Tech.

It just keeps getting worse and worse for the cyclones. They lost both their games this week by an average of 30 points. It is pretty clear where the program is headed and they just need to keep trying to get that singular conference win.