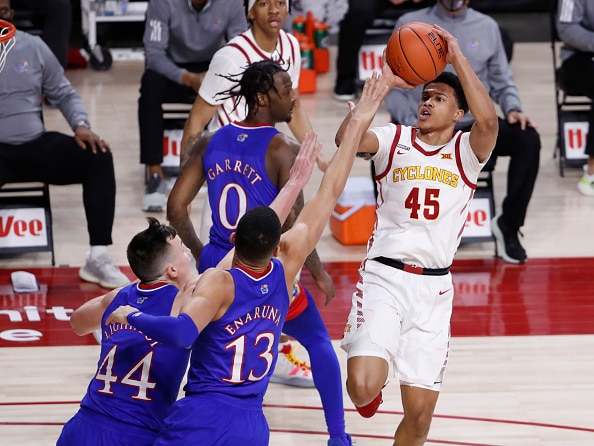 With both games last week postponed and the West Virginia game also being postponed, Baylor will go 18 days without a game. They have now had 6 games against Top 25 teams postponed, with only one being rescheduled, arguing a lot of Big 12 fans. Postponed or not, Baylor is still undefeated and will face an Oklahoma State team that gave them problems last time they met in an attempt to keep that streak alive.

Oklahoma continues to prove they’re a legit contender, this time on the road against West Virginia in what might be the game of the year. Reaves continues to shine, and guys like Umoja Gibson, De’vion Harmon, and Elijah Harkless have all stepped up at the right times. Oklahoma have their last big test of the season against Texas, before closing the season against three unranked teams.

West Virginia was a missed shot away from possibly having the best resume week of the season. They took down Texas Tech on the road and then barely lost in that Oklahoma game just mentioned. West Virginia is a legit team, and can matchup against any team in the Big 12. They take on Texas on Saturday in a game that could bump them up in bracketology.

Even though Texas Tech beat Texas head to head, Texas has a better overall and conference record, putting them ahead. Since the pause, this Texas team has not looked like the team we saw earlier in this season, losing three in a row before barely beating Kansas State. They looked a lot better against TCU, but they will have a big week to prove themselves with two games against Oklahoma and West Virginia.

It feels like every time Texas Tech enters the Top 10, they automatically lose. This team it was to West Virginia, and they didn’t get the chance to redeem themselves against Baylor. Kyler Edwards has really stepped up recently, and he’s going to be a player to watch over the next few weeks. Texas Tech get two games against TCU before a ranked matchup against Kansas.

Kansas desperately needed that win against Oklahoma State to turn their season around and they got it. With the two wins against Iowa State and the expected win this week against Kansas State, Kansas will be on a four game win streak heading into a giant matchup against Texas Tech. Kansas has never been below a 4 seed under Bill Self, and as a current 5 or 6 seed by some bracketologists, a win against Tech will certainly help their case to continue it.

Oklahoma State suffered a big loss to Kansas on Monday, and have a tough schedule upcoming. After the Iowa State game, they face Baylor, Texas Tech, and Oklahoma twice. It is unsure if they’re even eligible for the tournament, but if they are they need to win at least one of those to have a chance.

TCU needs to win one more game to clinch a winning season and they still play Kansas State and Iowa State. They’re not going to make the tournament barring they run the table and make it to at least the final of the Big 12 championship, so at this point they should just try to get that winning record. They have some nice young players, and will definitely be more of a competitor next season.

The losing streak has now reached 12 games. Kansas State hasn’t won a game in 2021, an amazing stat. They almost pulled off the upset against Texas, but didn’t have enough in them. They have their rivalry game against Kansas at home to look forward to, but at this point it seems like all the Kansas State players and fans are ready for next season.

Like Kansas State, Iowa State hasn’t won a game in 2021. They also haven’t won a conference game this season, and blew their chance against TCU. They do get to play TCU one more time at home in their last game of the season, and ending the season on a win would be a very great way to recap what this season of college basketball has been. After two very bad seasons, this might be the last few weeks of Steve Prohm with this program.