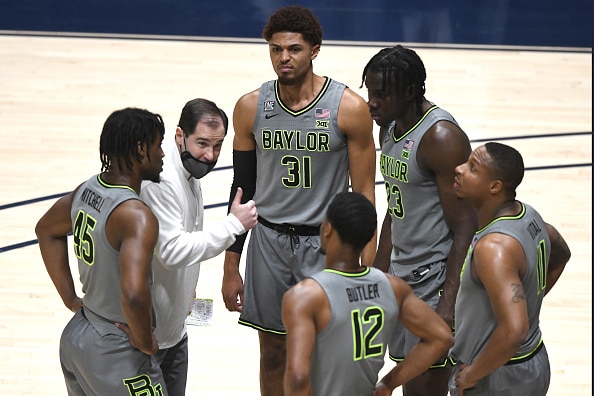 Baylor basketball used a big first half run to take control of their first home game in over a week, only its second since January 30. After falling behind early, 15-14, Baylor basketball went on a 9-0 run to grab an eight point lead. That lead would extend to 11 at halftime, and the Bears would not trail after that point.

Four Baylor basketball players scored in double figures, including Matthew Mayer, who dropped 19 off the bench in the win. Cade Cunningham led all scorers with 24, but was one of two Oklahoma State players to reach double figures, with Kalib Boone adding 10.

1. The layoff rust is shaken off

After a three week break due to COVID-19 issues, Baylor returned to action against Iowa State at home, almost losing to the 0-17 (Big 12) Cyclones. Later that week, Baylor basketball suffered its first loss of the year at the hands of Kansas at Allen Fieldhouse.

After that loss, Scott Drew’s team picked up an overtime win over sixth ranked West Virginia in Morgantown and came back home to easily defeat the surging Cowboys.

In the two games after the pause, Baylor shot below 45%, which it had only done twice before in the entire season. In the last two games, Baylor shot over 50%, which is a great formula for winning games.

If Baylor remains consistent from the field, pending any pauses, it is the biggest threat to dethroning Gonzaga in March.

2. Cade Cunningham: Then who?

Oklahoma State was coming off a tremendous three game stretch before traveling to Baylor, beating Texas Tech, as well as two wins over rival Oklahoma. In each of the three wins, Cunningham popped off, including 40 in an overtime win on the road versus Oklahoma. Cade played well this game, but the result was much different.

Aside from Cade, the Cowboys need to spread the wealth offensively. In each of the three big wins, at least three players scored above 15 points. In this one, Cade was the only player to do so.

This is not a knock on the other players and more on Cade Cunningham. He took 37% of Oklahoma State’s shots. In fact, no one else attempted over six shots. Granted, high volume still leads to high points, and he shot over 50% in this matchup.

However, guys like Avery Anderson III and Boone have to be involved more to spread the floor and make the offense more than one dimensional. Until then, a good defense, like Baylor, will find ways to limit shots for the role players and hold the Cowboys to lower totals, inevitably knocking them out sooner than later.

I’ll leave the expert analysis to CBBReview’s Big 12 writer Ariel Putterman, but for now, the obvious answer is yes. Other than rust due to pauses, Baylor basketball has no obvious flaws, and although the Big 12 is a competitive conference, it seems everyone else is playing for second.

Baylor is not untouchable by any means. Any of Texas, Texas Tech, Kansas, West Virginia, Oklahoma, or even Oklahoma State can have a great day and upset the Bears. However, Baylor is nearly sound on both ends of the ball, which they showed tonight. It will take a perfect game from the opposition to prevent Baylor from winning the Big 12 tournament.

Baylor has its fourth straight ranked matchup when it hosts Texas Tech on Saturday.

Oklahoma State has another tough task, traveling to West Virginia on Saturday.