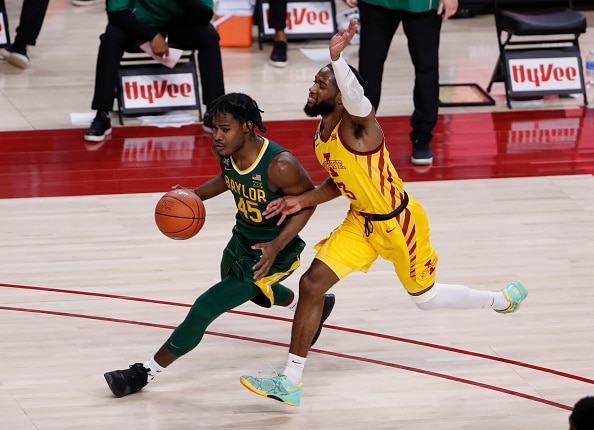 If you didn’t know it yet, now you do: This Texas team is legit. They went into Allen Fieldhouse, one of the hardest places in the country to win on the road, and destroyed them with a 25 point victory. If it wasn’t for their narrow loss against Villanova, this Texas team would be in the same conversations as Baylor and Gonzaga. They will have an easy game against Iowa State this week followed by another road test against West Virginia.

Baylor had a good week, going 3-0, but Iowa State actually hung with them until the very end. This is the same Iowa State team that’s 2-5 this season. We all know how good Baylor is, but they still lack a lot of the competition that teams like Texas, Kansas, and West Virginia have had in the conference. They have two games against middle of the pack Big 12 teams this week, then finally get to prove themselves next week with back to back games against West Virginia and Texas Tech.

Moving down to third in the Big 12 Basketball Power Rankings, and deservedly so are the Kansas Jayhawks. Last week they got embarrassed on their home floor by Texas and their weaknesses were exposed. This was the worst home loss in the Bill Self era and tied for the worst ever at Allen Fieldhouse. This is a good Kansas team, and they’ll need to turn it around quickly because like Baylor, they face those two middle of the pack teams this week in TCU and Oklahoma.

Losing Oscar Tschibwe, who announced this week that he was leaving the team, is going to have a huge impact on this team. In their first game game without him, they lose to Oklahoma. They will need other guys besides Derek Culver and Deuce McBride to step up, and Jalen Bridges and Taz Sherman did so last game even though it wasn’t enough. Bob Huggins will need to completely reevaluate his gameplan, and will need to do so before a test against Oklahoma State and a massive game against Texas at home.

Oklahoma has been a pleasant surprise for the Big 12 this season, and really proved their worth in their win against West Virginia on Saturday. Umoja Gibson was terrific, and Austin Reaves and Brady Manek are two insanely underrated players. They have a week of death this week however, with games against Kansas and Baylor, and based on those results we should be able to tell what chance they stand this season.

There are few teams in the country that have been more disappointing than Texas Tech. They lose at home to an Oklahoma State team that was winless in the conference before this game, and their second-best win this season is against Abilene Christian which is not great. They still need to prove they are a legit team, and this won’t be the week to do so as they are playing the two worst teams in the conference, but if they lose or narrowly win there is cause for concern.

TCU had two easy games this week and won both, but the margin of victory is concerning. Beating both by under 10 shows that this team might not be as good as we thought. With that being said, they still sit at 9-2 but that record is in jeopardy with two extremely tough home games against Kansas and Baylor.

Oklahoma State really turned their season around with that win at Texas Tech. They are finally starting to show better distribution of scoring, and with that win and only a three point loss against Texas, they have proved they can compete with anyone in the Big 12. West Virginia is another big game for them to prove themselves before a break from the difficult competition against Kansas State.

Kansas State played TCU pretty close which is a good sign, but they still haven’t proved they can go higher than ninth-best in the conference. They are getting balanced scoring which is a good sign for the future, but unless they beat Texas Tech or Oklahoma State, two teams that are looking to prove themselves, then they will stay in this spot next week.

The bad news for Iowa State, they haven’t won a game in the conference. The good news? They have played competitively with both West Virginia and Baylor and have been in the game well into the second half. We know that this team isn’t great and they won’t finish better than 9th in the conference, but the fact they are contending against some of the top teams in the country is a good sign for their future.