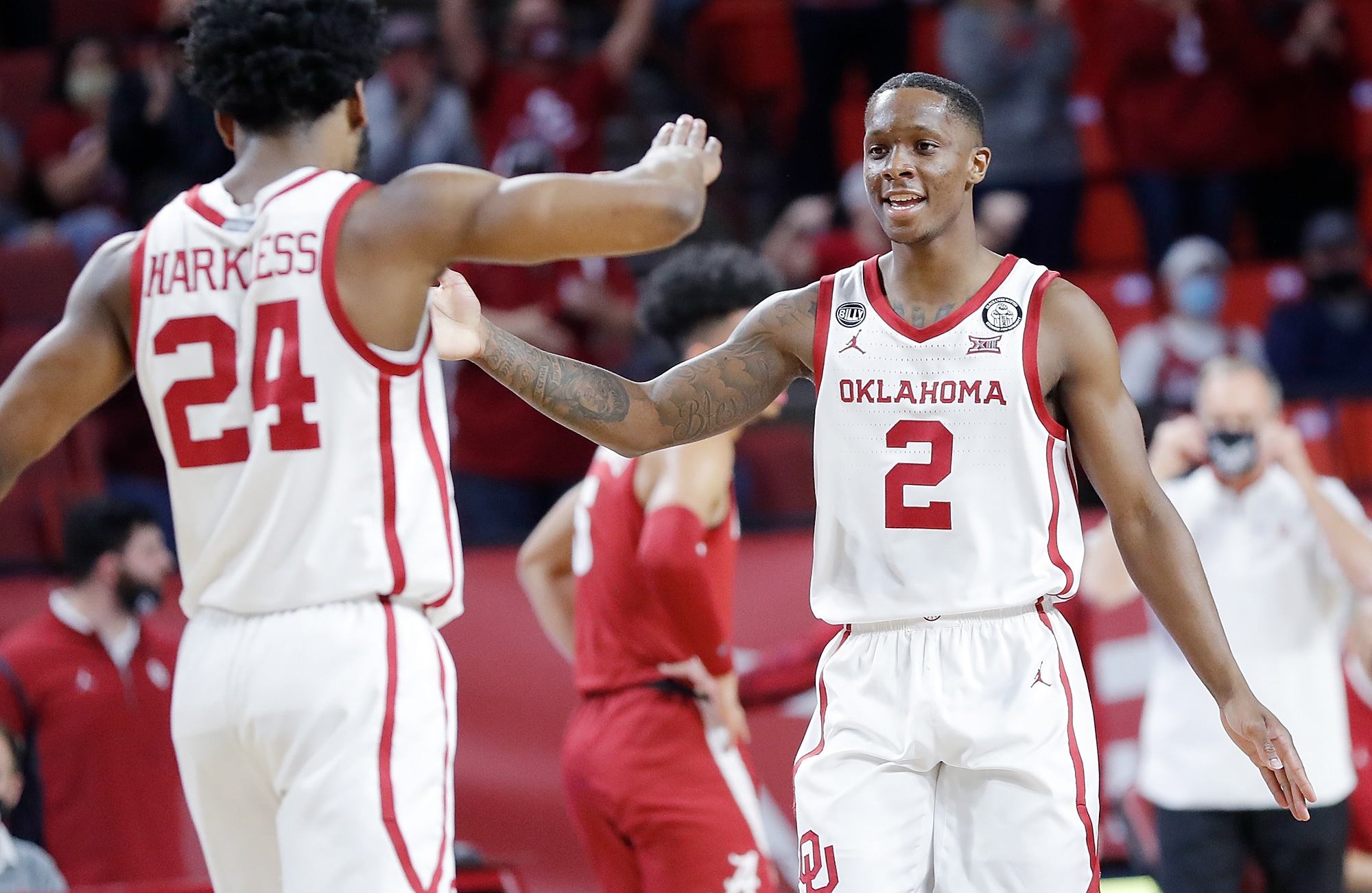 Oklahoma basketball knocks off their third straight top ten opponent despite being down two starters.

Oklahoma basketball continued its recent success against top-ranked teams by knocking off ninth-ranked Alabama on Saturday 66-61. The Sooners’ win should see them ascend in the polls even higher, and brought the Big 12 a huge win in the Big 12/SEC challenge. Meanwhile, Alabama’s ten-game winning streak was snapped. However, the Crimson Tide should still be the favorites in the SEC moving forward.

1) Oklahoma won this game because of hustle plays

There were questions about how well the Sooners would play being without Austin Reaves and Alondes Williams due to COVID-19 protocols. It turned out that they would be just fine. Oklahoma used a team effort to stave off numerous Alabama runs after Oklahoma went on their own runs throughout the game. The reason they were able to keep the Crimson Tide at bay was due to their effort in hustle plays.

Oklahoma basketball was crashing the offensive glass all day, leading to a 13-to-6 edge for the game. Many of those offensive rebounds came at key times, keeping possessions alive and leading to eventual points. Furthermore, so many loose balls ended up in the hands of Sooner players. Alabama came out flat, and Oklahoma took advantage of that, going up 11-2 early on, including forcing six turnovers in the game’s first five minutes. A game this close is usually decided by the kind of plays that don’t show up in the box score, and that was the case today.

Oklahoma’s tournament profile is quietly becoming one of the better ones in the country. The only thing the Sooners had been missing was a key non-conference win. However, that was taken care of on Saturday with their victory. They’ve now reeled off five straight wins, including three straight over teams ranked in the top ten at the time. Oklahoma basketball has shown they can compete with the big boys in the Big 12, defeating Texas on the road as well as Kansas and West Virginia at home.

They also proved that they can fight through adversity, as they won this game without their leading scorer (Reaves averages 15.8 points per game). The supporting cast of De’Vion Harmon and Umoja Gibson have been stepping up of late. Harmon led all scorers in this game with 18 points, while Gibson added 12 of his own.

To make a run in March, it’s important to have different guys that can step up when needed. The Sooners appear to have it all coming together at the right time, and are a team that may be worth picking to the Sweet 16 and beyond.

3) Alabama misses out on its last good opportunity before March

Alabama only has two games remaining against potential tournament teams in LSU and Missouri on their schedule. Otherwise, they face a bunch of teams that will be looking to play their best game of the season and get the upset victory. Furthermore, the SEC is considered one of the weaker power conferences this season, so they missed a huge opportunity to raise the stock of the league.

Overall, this loss doesn’t hurt the Crimson Tide all that much. The Oklahoma basketball team they faced today is solid. They are also still in control for a regular season title in the SEC and the top seed in the conference tournament. They also shouldn’t fall far, if at all, in seeding in bracketology. However, in the bigger picture, they may be stuck where they are without the chance to boost their profile any further. Alabama could still very well be a Final Four contender, but first they have to navigate the bottom-dwellers of their own league.