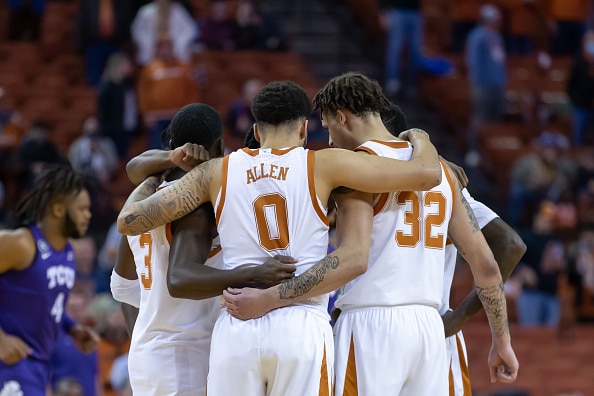 Matchup of the week: Baylor vs Texas

Sneaky good matchup of the week: Kansas State vs Oklahoma

Baylor had themselves a super important week, beating Kansas and holding a one seed in the bracketologies that were updated after the game. Even with the injuries to the team, they’ve had different guys step up and lead them to victory. Now, they still need help from Kansas if they want to win the Big 12 outright or take a share, as they are a game back, and will have to beat two tournament teams this week to have a chance. This is a big resume week if Baylor wants to enter the tournament as a 1 seed for the third year in a row.

An average week for Kansas, as they drop 100 points against their rival Kansas State, then lose by 10 on the road against Baylor in a day where the 1,2,3,4,5,6 and 9 teams in the country all lost. Defense remains an issue for Kansas, as they allowed 80 points in both games this week and sit in the 30s in defensive rating. As I mentioned, Kansas is still in a great position to at least take a share of the Big 12 title, but they will have to get through a TCU team twice that just beat Texas Tech, then Texas at home.

Texas Tech suffers another unnecessary loss that all but ruins their chance at the Big 12 title and affects their seeding. In a very winnable game, TCU just wanted it more and with March coming up, you can’t have that mentality. With that being said, they looked awesome against Oklahoma. Now, one thing I want to point out is that they are 3-6 on the road this season, which can be a little cause for concern. They take on Oklahoma State on the road in the last game of the regular season in an attempt to boost that record.

Texas enjoys a nice 2-0 week, even if it came down to the last second against bottom feeder West Virginia. Andrew Jones and Timmy Allen have been great, and this team is doing what it can to boost their seeding. This week will be their true test. First, they take on Baylor at home, then close out the season on the road against Kansas. These two games will really determine how legitimate Texas can be in the upcoming weeks.

With the bubble inching closer to them, TCU needed to beat Texas Tech to remain safely in the bubble and did just that, adding a Top 25 win to their resume and remaining safely in the field for now. They shouldn’t pump the brakes yet, as they take on Kansas twice this week. If they can beat them once, then they can lock themselves into the NCAA Tournament, so keep your eyes on TCU.

After winning just two games last year, Iowa State hits the 20 win mark on Saturday, an incredible transformation and one of the best stories this year. Izaiah Brockington is a star, and they are in a position to be the favorite in their first tournament game. A win vs Baylor would be the icing on the cake, but nonetheless, everyone associated with this program should be extremely proud.

Every time Kansas State has an opportunity to boost their resume and work their way into the bracket, they don’t deliver. The Kansas loss is understandable, but they really needed that win against Iowa State. Now, they probably need to win 2-3 games against Kansas, Baylor, Texas Tech, and Texas to even be considered, not an easy task by any means. The good news for them is they have a star in Nigel Pack, who scored 30 points once again. They need to do whatever they can to keep the sophomore this offseason.

It looks like Oklahoma is well out of the bracket, but can use this week to at least create some buzz. They have two winnable games upcoming, and that win against Arkansas looks better and better by the week. This is a massive week for the Sooners, and we’ll see if they can rise to the situation or not.

Oklahoma State loves overtime, needing the five extra minutes the last three games and six times overall this season. Unfortunately, they couldn’t deliver in the extra period this week, going 0-2 and falling under .500 on the season. Oklahoma State finishes up the regular season this week and has next year to look forward to when they can compete for the National Championship once again.

The freefall continued this week, as they are now 1-13 in their last 14 games. Questions are now revolving around whether Huggins will stick around or call it quits after a season like this. Either way, West Virginia should look to next season and try to get back to all those successful seasons they’ve had under Huggins.