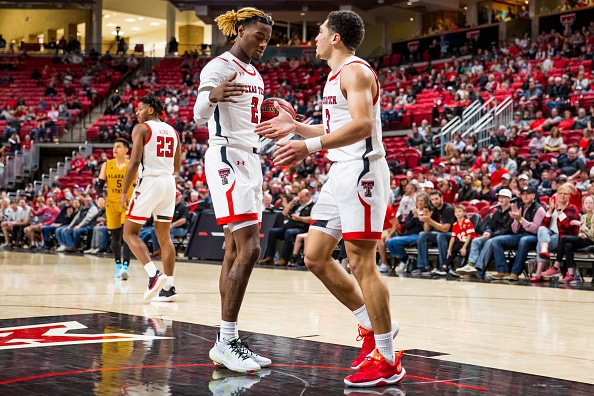 Matchup of the week: Baylor vs Texas Tech

Sneaky good matchup of the week: Oklahoma vs Texas

Baylor was the only team that was easy to rank this week in the Big 12 basketball power rankings because after this it’s an all-out bloodbath. Even though they won both games, they kept it close in both, with Oklahoma keeping it in single digits most of the game and TCU actually led at the half before Baylor pulled away.

Baylor continues to be the team to beat in not only the conference but in the country. They take on what might be their biggest match yet in Texas Tech who is coming off a really strong week.

What a week it was for the Red Raiders. Iowa State fans might be upset that Texas Tech jumped them despite the loss, but Texas Tech was extremely shorthanded and on the road and nearly won, earning them the number 2 spot. Against Kansas, they were without their two leading scorers, Terrence Shannon Jr. and Kevin McCullar, and still completely outplayed them.

While they might have three losses, all three are to ranked opponents, and the win against Kansas is a big boost in the resume. They have their biggest game of the season on Tuesday when they travel to Waco to take on the Baylor Bears.

After a 12-0 start, Iowa State finds themselves at 1-2 in conference play. They pulled out an ugly win against Texas Tech at home, then got completely outplayed in the last 10 minutes of the second half against Oklahoma.

This is an extremely difficult league, and Iowa State can easily fall to 1-4 in conference play with a road game at Allen Fieldhouse and a good Texas team. Regardless, the close finishes with these top teams have proven that Iowa State isn’t a fluke and will be towards the top throughout the season.

Kansas completes their two-game road trip at 1-1. Against Oklahoma State, they went nearly 10 minutes without a point, missing 19 straight shots, and still won by 11. Then, they were completely exposed by Texas Tech, getting outplayed from the jump. This Kansas team is still extremely dangerous but has shown many flaws recently, especially their paint presence.

Texas Tech’s bigs completely outplayed Mitch Lightfoot and David McCormack, which could be an issue down the stretch against Big 12 teams with similar play styles.

The good news is Jalen Wilson finally got it going after a season-long slump with 20 points against Texas Tech. David McCormack, the other player from last year who has struggled this season, scored 17 points and added 15 rebounds in the win on Tuesday. If those guys can become more consistent, and Remy Martin, who was banged up the last two games stays healthy, this team is as good as it gets, but that remains a big if.

Oklahoma proved this week that they have what it takes to make a deep March Madness run. They are extremely well balanced, and a pain defensively. One player I want to highlight is freshman Bijan Cortes, who might not put up great stats, but makes a lot of heads-up plays that lead to team success.

Oklahoma is one of three teams above .500 in conference play so far and will look to keep that going with two road games this week.

Texas continues to swing and miss on resume-enhancing wins. This team continues to leave more questions than answers, especially after that loss where they were completely outplayed by an Oklahoma State that isn’t bad but should have been a win for Texas.

This is their most important week so far, taking on two teams ahead of them in the power rankings to determine where they really belong and whether we can consider them someone who can compete in the best conference in basketball, the Big 12.

West Virginia needed all 40 minutes to take down Kansas State at home, which may be considering. Taz Sherman, a Wooden Award Midseason Watch List snub returned after missing the Texas game, but West Virginia has not looked solid so far. Perhaps they just need time to adjust to the level of competition, which we’ll see this week when they take on Oklahoma State and Kansas.

Of all the great teams Baylor has played this season, TCU is the one to give them the most trouble. A big reason why was Mike Miles, who had 26 points before exiting with a wrist injury.

The severity of the injury will seriously determine how good this TCU team can be. This week will be a good test to see what TCU is capable of, especially if Miles sits out a game or two to recover.

After a surprisingly weak nonconference display, Oklahoma State finally looked like a team on Saturday, taking down Texas in a balanced effort and a great defensive performance. Oklahoma State has the talent to compete with any team, and expect them to continue to do so.

They have a tiring week upcoming, with three games in five days, including two against Top 25 teams in Baylor and Texas Tech.

It almost feels wrong to put Kansas State last because they’ve been playing well, but Big 12 basketball being so unbelievably good plus the 0-3 conference record leads them here. As mentioned last week, Kansas State needs to win those 50-50 games, and West Virginia was another one they weren’t able to come away with.

They get another one this week against TCU, and if they can’t win that one they can be in danger of starting conference play 0-8 because they play Texas Tech, Texas, Kansas, and Baylor after TCU.