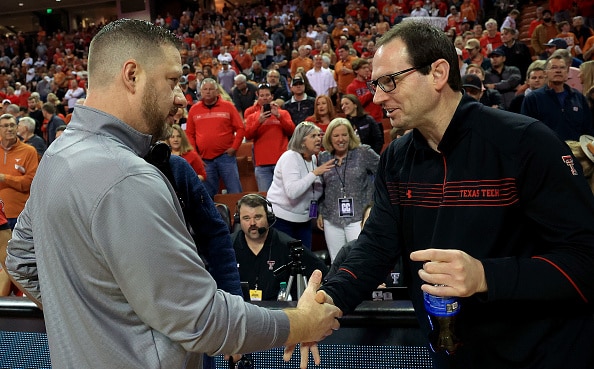 Matchup of the week: Kansas vs Baylor

Texas Tech sweeps Baylor for the first time since 2005! pic.twitter.com/T9dGD3o7wY

After getting knocked off the podium last week, Texas Tech returns to the top of the Big 12 basketball power rankings following an extremely impressive week. They started it off with a sweep against Top 10 Baylor, then beat their newfound rivals on the road. While AP ranking and bracketology may indicate that Baylor and Kansas are the better teams, anyone who has watched the Big 12 knows that Tech is the team to beat. They have a fairly light rest of season schedule but will need some help from Kansas if they want at least a share of the Big 12 title.

It’s now considered a rare week when a Kansas game doesn’t come down to the buzzer, but the Jayhawks were able to get it done in both games, winning by double digits. Agbaji looked like his old self after a relatively quiet few games, and the defense has improved heavily. With the Baylor loss, it’s their Big 12 to lose, with a 2 game lead and only five games remaining. This week will determine how soon they get it, with a rivalry game on Tuesday followed by what may be their most difficult game of the season, a road test against Baylor.

The Top 3 in the Big 12 are so competitive, that a loss on the week almost automatically puts you in third. Baylor officially got swept by Texas Tech on the season and is in danger of the same result against Kansas. Injuries remain an issue, but they’ve had different guys step up, with the last four games having four different leading scorers. That Kansas game this week is super important for resume, Big 12 title, and momentum reasons for the Bears.

Texas is the only team that doesn’t move in the Big 12 basketball power rankings every week because they’ve solidified themselves as the clear fourth-best team in the conference. They had an opportunity to cause some chatter this week, but lost to Texas Tech at home and needed an extra five minutes to take down an Oklahoma team that is 4-10 in conference play. They still have favorable seeding, but these two games are must-wins because their final two games next week, Baylor then at Kansas.

Iowa State is back! After falling onto the bubble following their 3-9 Big 12 basketball start, they responded in a big way this week, taking down TCU on the road then crushing Oklahoma at home. With 18 wins now, it’s safe to say that two more wins in regular season and conference play will clinch a tournament bid, something Iowa State fans are ecstatic about considering the result last season. They can do that this week when they take on West Virginia and Kansas State.

Kansas State really could have used a win against Oklahoma State on the road, but alas they fall and stay out of the tournament according to most bracketologists. The good news is they have a few more chances to pick up that signature win, with games against two tournament teams in Kansas and Iowa State upcoming.

Oklahoma State proved once again that despite not being eligible for the tournament, they were not giving away a freebie. Kansas State really could have used that win, but Oklahoma State plays every game to win, and did so on Saturday. Three of their last four games are against teams that will make the tournament, with their other game being against in-state rival Oklahoma this weekend.

TCU is trending in the wrong direction losing both this week, and have to play 6 games in the last two weeks. That starts this week with two currently ranked teams in Texas and Texas Tech, then two games against Kansas next week. TCU desperately needs to win one or two of those, because even if they sweep West Virginia (who they have two more games against), a 7-11 conference record might not be enough to make the Big Dance.

It’s officially panic mode in Norman, as the Sooners now sit at 4-10 in conference play and just one game over .500 with two weeks of games left. They really could have used a win against Texas, but couldn’t prevail and now are left to hope the bubble weakens. Texas Tech is their only ranked opponent left, so if they go 3-1 in their last four, they can make some sort of case but in reality it’ll come down to the conference tournament.

West Virginia is now 1-9 in their last ten games, and unless they win out, it is safe to assume they will be joining Oklahoma State as the two teams guaranteed not to make the tournament this year. The good news for the Mountaineers is that Bob Huggins was named a finalist for the Naismith Hall of Fame, so there’s hope that he finally makes it.