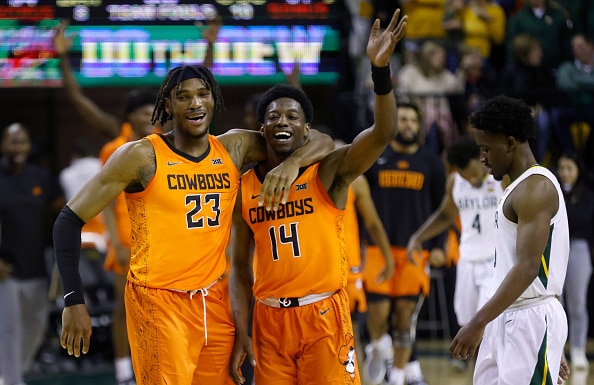 Matchup of the week: Texas Tech vs Iowa State

Sneaky good matchup of the week: Texas vs Oklahoma State

What a crazy week in the Big 12. With that, we have a new #1. Yes, they did lose to Kansas State, but that was their fourth game in seven days, plus a road win against Baylor and a 21 point win against Oklahoma State trump the loss. Kansas State was also their first unranked loss this season. Texas Tech is the team you want to play the least in the Big 12 right now, and they are seeking revenge at home against Iowa State this week after losing a close one on the road shorthanded a few weeks back.

The margin between Kansas and Baylor is so close that for the first time in Power Rankings history we have a tie. Kansas needed all 40 minutes to take down Iowa State at home, with DaJuan Harris being the unlikely hero as he layed the ball in with 5 seconds left to take the lead. They needed a lot less time the following game, dominating West Virginia in the second half for the easy win.

The X Factor? David McCormack, who has now had two good conference games. They’ll need him to be more consistent to be a legitimate threat, but he has looked a lot better recently which every Kansas fan is excited about. They head back on the road this week but take on two unranked opponents, including rival Kansas State.

Baylor finally came down to earth, and in a big way, losing back to back games at home. A big reason is their lack of offense. They only scored under 75 once this season before last week, then went on to score 62 and 54 in back-to-back games. There is no doubt they will turn it around, but this was definitely a very concerning week for them. They should be able to get back on track this week against two teams that are also struggling in Oklahoma and West Virginia.

Iowa State was on the other side of that incredible game, losing in a tight battle. They then beat Texas pretty easily, never really allowing them to keep it close. Iowa State’s resume is extremely underrated, with tons of quality wins and only one bad loss. Izaiah Brockington has been incredible and deserves more national recognition. Up next is a tough game against Texas Tech on the road followed by a TCU team that just beat the same Oklahoma team Iowa State lost to by double digits a few weeks prior.

It’s so hard to rank this conference. The teams at the bottom are beating the teams at the top and there seems to be little to no home-court advantage. Despite the seven losses, tied for most in the conference, back-to-back weeks with wins against Top 15 opponents jump them up to #5. It’s really a shame they can’t compete in the tournament because they are building a solid resume and have a team that’s more than capable of winning some games in the tournament. Can they sweep Texas? We’ll see this Saturday on the road.

The good news for West Virginia, their other guys are stepping up. The bad news, Taz Sherman has been silent. If they can have everyone clicking, then this team can be good. If not, then it’s hard to really know. As you can see with the tournament seeding, this team can be anywhere between a 6 and 9 seed, so they’ll need to step up and establish a solid position. No better way to do so than back-to-back games against Top 20 opponents.

There are two teams in the Big 12 with one loss, Kansas and TCU. While the two teams they’ve beaten aren’t the top dogs, they’re still finding ways to win, and we can’t punish them for winning. Mike Miles continues to shine and Micah Peavy came up big in their last game. They play arguably their two hardest opponents this week to see how legit they are.

Texas continues to disappoint, losing again on the road to a ranked team. They are now 0-3 vs ranked opponents and 1-4 on the road this season. There’s been zero consistency and haven’t proved they can be any better than a first-round upset this year. They won’t help this week, playing two home games, but perhaps a win against Oklahoma State can earn some confidence for the Longhorns.

Oklahoma gets swept on the road and falls to 2-3 in conference play. Those were two very winnable games and may hurt them down the road. They have a serious chance to fall to 2-5 in conference play when they take on Kansas and Baylor at home this week.

It feels unfair to put Kansas State at 10 after pulling off one of the biggest upsets of the season, but they are the only team in the conference with one win. This team has looked good but hasn’t been able to close games out which has led to their conference record. This will be a tough week for them, but Texas is a winnable game for sure.