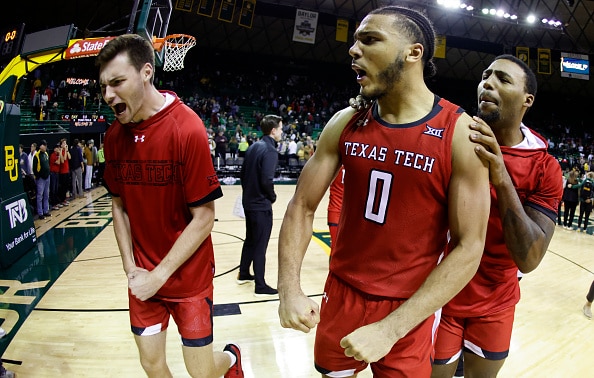 Matchup of the week: Texas vs Baylor

Tonight's crowd of 15,300 is a new arena attendance record‼️ pic.twitter.com/YZIckjDLHN

Texas Tech keeps the number one spot after another 2-0 week. They did so by taking down Chris Beard and the Longhorns in one of the best environments college basketball has ever seen. If the team lost every game but that one this season, it would be considered a successful season, that’s the level of animosity there was in the building. They followed it up with a game that almost had two serious injuries, with Terrence Shannon and Adonis Arms both experiencing dangerous plays but it appears both are fine. Upcoming they have a relatively easy week, taking on two middle-of-the-pack Big 12 basketball teams.

If there was a team of the week award in Big 12 basketball, it would go to Kansas. They started the week traveling to Ames without their star forward Ochai Agbaji and still came away with the win. Then, they did to Baylor exactly what Kentucky did to them the week before, obliterating them in every aspect of the game and blowing them out from start to finish. That was by far Kansas’ most impressive game of the season and if they can play like that, it’ll be hard to beat this team. Their final leg of five straight-ranked opponents is on Monday when they travel to Texas, who have looked a lot better as of late.

Baylor has had two bad weeks this season, and this was one of them. First, they barely beat West Virginia, and probably shouldn’t have if their best player Taz Sherman didn’t get hurt in the closing minutes. Then they suffered one of their worst losses since they became a respected program on the road against Kansas. Yes, this team is still very hurt, with Flagler, Cryer, and Akinjo not being 100%, but guys like Matthew Mayer and JTT need to step up in these scenarios and be the guy. Baylor is hoping for a healthier and better performance against Kansas State on Wednesday and Texas on Saturday.

Put it in the Win column 🤘#HookEm pic.twitter.com/dw9yNkrPoW

Texas had no shot to win that game against Texas Tech in that environment, but they kept it competitive which is more than Longhorn fans can ask for. They then dominated Iowa State and only allowed 41 points. This team is definitely improving, and up ahead they have a massive week to prove to themselves, the country, and the bracketologists what they can do with back-to-back home games against Kansas and Baylor.

Here come the Wildcats! After being at the bottom of the Big 12 basketball rankings most of the season, they have made a strong comeback and sit in the middle of the pack. This week really aided them, beating Oklahoma State in a close one and winning easily on the road against TCU. They still hold those wins against Texas and Texas Tech, and should definitely be considered in a bracketology as a last four in at least. They will get more opportunities this week against Baylor and Iowa State.

TCU still boasts a good record and decent conference play record, however, they have yet to play the gauntlet. After the Oklahoma State game, six of their last nine games are against Top 25 opponents, including five of them being against Top 10. They need to win some of those and need to beat Oklahoma State, because if not they can see their seeding continue to fall. TCU has proven they can do so, beating LSU and Iowa State already this season.

The spiral continues for Iowa State, now sitting at 3-7 in conference play after heading into it undefeated. The great news is that Iowa State only has one more ranked opponent left on their schedule, Baylor in their last game. That means their next seven games they will either be favored or 50-50, giving them a chance to improve their conference record and gain confidence heading into March. This can also prove to people that they were a one-hit wonder if they can not take advantage of this upcoming stretch. Time will tell how much we can trust Iowa State.

Oklahoma State won the first of the two Stillwater showdowns, defending their home court. They did lose to Kansas State though, keeping them in this spot. There’s not much to say about this team, they are very average and can win and lose to any team on any given night. Up next comes two unranked teams once again, something the Cowboys can get behind.

Not ideal for a team on the bubble

The tweet says it all, the Sooners are in trouble. They’ve dropped three in a row now with four of their next five against Top 25 opponents. They are already considered out on half the bracketology, and unless they win two or three of those games, they’ll stay that way. Porter Moser will need to coach like he’s never coached before if he wants to make the tournament in his first year in Norman.

The free fall continues for West Virginia, losing their 7th straight and now sit dead last in the Big 12 basketball standings. They have a lot of work to do the rest of the season, and their schedule will allow them to at least make an attempt. Something needs to change though because a tournament committee won’t be too favorable to a team that has lost 7 straight.