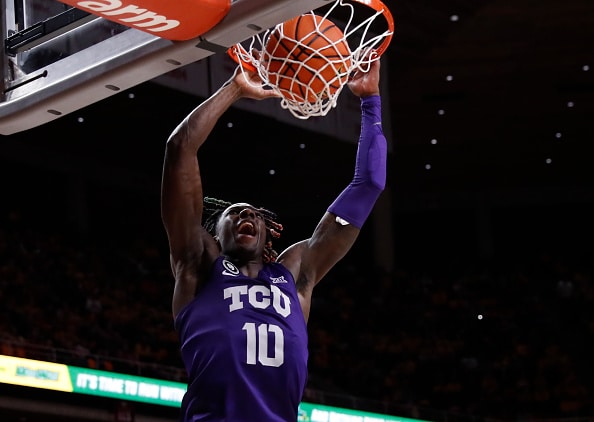 Matchup of the week: Kansas vs Texas Tech (Conference), Kansas vs Kentucky (SEC/Big 12)

Texas Tech took a big leap forward this week, winning back-to-back games at home against good teams. The defense remains brutal, up to 4th in KenPom, and with Shannon back, the scoring has come with it, as we saw in his 23 point performance against West Virginia. Now, arguably their most important game of the season, where they go to Allen Fieldhouse and try to sweep the Jayhawks on the season. This is followed by their Big 12/SEC matchup against Mississippi State, a game they should win, but the Bulldogs are no pushover.

Following its win at Oklahoma, @BaylorMBB is the only team in the country with seven Quad 1 wins 🎉🔥🙌 pic.twitter.com/JITYk75IGo

Baylor enjoyed a nice road trip, going 2-0 on the week and improving to 17-2 on the season. West Virginia gave them some trouble without Akinjo and Sochan, but Matthew Meyer and LJ Cryer fueled a big win there. Baylor takes on Kansas State, who have proven they’re no pushover, then an Alabama team that is arguably the most inconsistent team in the country. Baylor is hoping to see the Alabama team that got crushed by Missouri, not the one that beat Gonzaga.

The top 3 teams in last week’s power rankings all went undefeated, making this part easy. It’s what’s under that is the tricky part. If you love excitement, then this Kansas team was the team to watch last week. First, we had a back and forth battle in Norman, Oklahoma, where a Christian Braun three with under 10 seconds left sealed the victory. That wasn’t even close to what happened on Saturday when Kansas State jumped out to a 16 point halftime lead, but the Jayhawks chipped away and a late Ochai Agbaji basket completed the comeback and got them the win. Kansas remains atop the Big 12 basketball standings for now with some big games ahead.

Kansas has the offensive tools but needs to be better on defense. That, and consistency from their top 5 guys (Ochai Agbaji, Christian Braun, Remy Martin, David McCormack, Jalen Wilson), and this team will be rolling the rest of the season. Up next is their hardest week of the season, where they take on the only team to beat them so far in conference play, Texas Tech, followed by a massive game at home against Kentucky.

For the fourth time in five years, TCU wins in Ames!#GoFrogs pic.twitter.com/y0OG7ZhVHm

After the top 3, ranking 4-10 in the Big 12 is nearly impossible. TCU would have made this a lot easier if they didn’t blow a 6 point lead with 1:30 left in the game against Oklahoma State, but the close nature of that game on the road plus the dominant victory at Iowa State surprisingly earns them the 4th spot in this week’s power rankings. TCU continues to get balanced scoring, with 4 different leading scorers in the last four games and has looked great defensively, allowing under 60 points in both games last week.

TCU still needs more signature wins to solidly be in the bracket, and will have a great opportunity this week when they take on Texas and LSU.

Oklahoma State picked up a big win against TCU, then almost swept Texas, losing by just 5 on the road. Bryce Thompson has really emerged for the Cowboys, leading them in scoring in three of the last four games. Up ahead comes a home game against Iowa State, who is suddenly very beatable followed by a road test against Florida.

Incoming Texas fans who are mad that Iowa State is ahead of them even though they are 4-3 in conference play while Iowa State is 2-5. The reason why is they have the same overall record, and Iowa State’s wins are miles better than Texas’.

With that being said, everyone’s early-season darlings have returned to earth, and while they are by no means the bottom feeders that everyone expected, they certainly aren’t a serious title contender at this point like they looked a few weeks back. Scoring 44 at home is pretty unacceptable, and Iowa State needs to figure it out soon or they very well may end up in that bottom spot in this extremely difficult conference. The good news is that Iowa State only has two more games against currently ranked opponents this season, and in the SEC full of great teams, they get to play one of the worst in Missouri.

The woes in Texas continued this week, losing to then one conference win Kansas State at home. This team already has three conference losses and they haven’t played Kansas, Baylor, or Texas Tech yet. Many more questions than answers remain with this Texas team, and if there’s a time to answer them, it’s now. After the TCU game, they face Tennessee, Texas Tech, Iowa State, Kansas, and Baylor. If they can pull off a few wins there, people will start to take them seriously, but until then, Texas has a lot to work on.

If Kansas State could finish games, we’d be looking at this team completely different. First, they were finally able to, beating Texas by 1 on the road. Then, the Kansas game. They were up 16 at the half and looked like they were going to knock off their rival, but somehow fell and sit at 2-5, tied for last in the Big 12 basketball standings. Now they have one-possession losses against Marquette, Oklahoma, West Virginia, TCU, and Kansas.

This team is so much better than their record, but if they can’t finish these games, then they will remain out of the NCAA Tournament bracket and towards the bottom of the Big 12. They get a tough opponent in Baylor on the road before taking on an Ole Miss team that won’t necessarily help their resume, but won’t hurt it as well.

West Virginia suffered an 0-2 week, granted it was to the two best teams in the power rankings. West Virginia doesn’t really have a bad loss now that Marquette is ranked and a road game against Texas isn’t bad at all, but they need to win some of these big games in order to improve their tournament status and stay firmly in the bracket. They have a decent chance this week, playing two bubble tournament teams in Oklahoma and Arkansas.

Just a note, being 10th in Big 12 basketball is the equivalent of 5th in any other Power 6 conference. Big 12 basketball is just that good.  Oklahoma, unfortunately, suffered another tough week and has the most “bad” losses of any team in the conference. They still boast a 12-7 record but are in danger of adding to more losses this week with a road matchup against West Virginia followed by another road matchup against the top team in the country, Auburn.