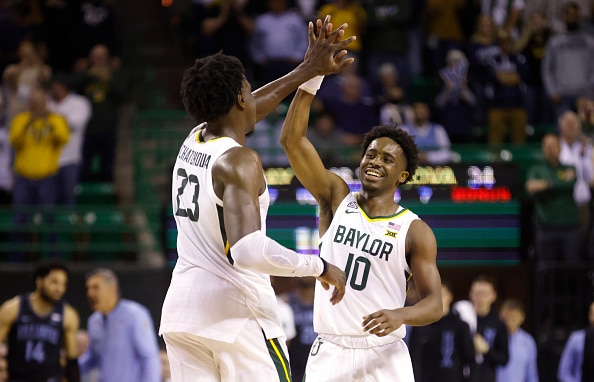 Many teams pulled off big-time wins this week, where do they rank in the Big 12 basketball power rankings?

Matchup of the week: Texas Tech vs Gonzaga

Sneaky good matchup of the week: West Virginia vs UAB

Not only the #1 team in the Big 12 basketball power rankings but #1 in all of college basketball. The Baylor Bears have shown that they are a legitimate threat to go back to back after a dismantling of a top 6 Villanova team. Their extremely high level of defensive intensity paired with their versatility on offense makes them near impossible to match up with, and no team has come close to solving them yet. They take on Oregon in what should have been a great game, but Oregon has been arguably the biggest disappointment in college basketball.

As we cross the one-month mark in the college basketball season, the biggest surprise this season is undoubtedly Iowa State. The same team that won 2 games last year is 10-0 with a ton of quality wins. They did it again this week when they cruised to a 20 point victory against a good Iowa team, and they are slowly silencing the doubters who think that despite the start, they’ll still finish middle of the pack. They have a relaxing week this week, and it looks like Iowa State will head into 2022 undefeated.

Kansas took the border war rivalry very seriously, absolutely obliterating this Missouri team at home. That Dayton loss looks more and more like a fluke each game and this team is looking like a real threat to tear down the nets. Christian Braun has shown a lot more confidence the last few games and is a big reason why they have had so much recent success. Pair him with Ochai Agbaji, the top scorer in the whole country, and you’ve got a great wing combo.

After having no quality wins and receiving a lot of hate, Texas Tech silenced the doubters beating Tennessee in overtime. The Providence loss wasn’t necessarily a bad loss, just the only loss for Tech as they sit at 10-1 at the moment. They’ll have an incredible chance to improve their resume on Saturday when they take on Gonzaga.

West Virginia continues to show how good they can be, this time pulling off the upset against Uconn. Taz Sherman has scored 18+ points in all but two games this season and Bob Huggins continues to climb up the all-time wins leaderboard. They take on one of the most talented mid-major schools this weekend in UAB.

If Oklahoma was able to beat Butler, we’d be having a whole different conversation after they dominated a then-undefeated Arkansas team. Still, Porter Moser is coaching up an absolute storm and they have gone from a bubble tournament team before the season to one who could win a game or two.

There will be no sure victories in Big 12 play when a team plays Oklahoma, and with two easy matchups incoming should be a ten-win team heading into conference play.

Yes, Texas is 7 in the Big 12 basketball power rankings. A big reason I am now putting best win and worst loss is to show that Texas still doesn’t have a quality win. In fact, every team above them has a ranked win right now. Both their losses are to ranked teams, but this was a final 4 favorite, and if they can’t beat Seton Hall (with no disrespect to them), it is hard to take them seriously. They’ll have a chance to earn a new best win this week against a good, not great Stanford team.

TCU are a very quiet 8-1. They have played solidly all around and look like a team they can fight in the middle of the Big 12. They don’t have that big-time win that’s needed to jump in the ever so challenging Big 12 but have done exactly what they needed to do so far as we near conference play. If they head into conference play with one loss, they’ll earn the respect of their fellow Big 12 members.

Sometimes, the best way to succeed is by doing nothing at all. That was the case this week when Kansas State’s loss actually bumped the Cowboys up. They get rewarded by taking on a great mid-major team in Cleveland State, then have six of their seven games after that against ranked teams, starting with Houston.

Kansas State just didn’t have enough in the tank to beat Marquette at home and are now back in Big 12 purgatory. The thing about this team is that it’s still plenty talented and should win multiple games during conference play, they just need to be more consistent. They play Nebraska on the road this weekend, which is a relatively even matchup and can really address if they can compete in the Big 12 this season.