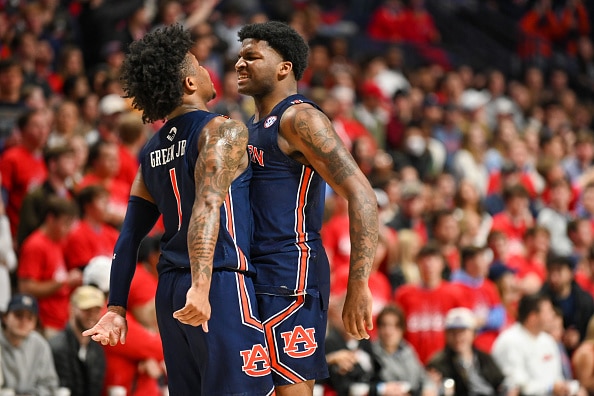 The ninth annual Big 12/SEC Challenge commences on Saturday, as arguably the top two conferences in college basketball prove their dominance over each other.

In their eight previous competitions, the Big 12 currently leads 4-2-2, with the SEC narrowly winning last year 5-4. 20 teams, 10 from each conference will face each other in an exciting Saturday slate. Here is a preview and predictions for each game and the overall competition will end.

The first matchup of the Big 12/ SEC challenge should be a great one. Both teams come into this matchup with four losses, LSU sitting at 16-4 while TCU is at 13-4. This is going to be a defensive battle, with both teams being Top 20 in defense this season, including LSU at #1. LSU has looked a little lost since starting point guard Xavier Pinson went down, losing three straight before a narrow win this week, however, they should have just enough to inch past TCU on the road and take home the win.

Two bubble teams who need to win this game take each other on in what should be a fun one. These teams are on opposite trajectories, with West Virginia losing four in a row after starting the season 13-2, while Arkansas has won their last five after dropping four of five right before that. Both teams understand the importance of this game, and it could come down to the last seconds.

This is one of the three games starting at the same time in the Big 12/ SEC challenge and could be a tricky one. Auburn is the best team in the country right now, sitting at 19-1, but have looked a little lackluster the last two games, beating Kentucky, but only pulled away after their star guard got hurt, then barely beating a Missouri team that lost to UMKC by 20.

Oklahoma is well-coached and well-balanced, but it will be difficult to pull off the upset on the road against a team like Auburn. They will need Tanner Groves to step up and try to find a way to guard potential #1 pick Jabari Smith if they have any chance of winning.

Last year, this game would have been appropriate, but Iowa State has been amazing while Missouri… has not. The Cyclones have come back to earth after their hot nonconference start, but at home, this one shouldn’t be close. This might be the most boring game of the day.

The next trio of Big 12/ SEC challenge games begins at 4 PM, with this game being one of them. Baylor has done nearly everything right this year and hasn’t missed a beat since winning the championship last year besides the one-off week.  Alabama on the other hand has been as inconsistent as they come. This year, they have beaten Top 10 teams in Gonzaga and Houston, but have lost to SEC bottom feeders in Missouri and Georgia.

You never know which Alabama team you’re going to get, and they’ll need to be the good one if they want any chance against Baylor. This could be the best game of the day, but it could also be a blowout.

Neither team has been particularly bad this year, but neither has been great. Both teams have played in some winnable games against teams better than them but were unable to close out. A lot of it will come down to the guard matchup between the Kansas State and Ole Miss guards. Whoever can win that matchup will come away with the victory.

This game will really come down to if Florida’s star center Collin Castleton is playing. If he is, Florida should win this easily, but if not, it’s a real toss-up. Florida is really pushing for a tournament bid, and Oklahoma State would too if they were eligible. This may come down to the last few minutes like some of the other games, but all eyes will be on whether Castleton can play.

The best game of the Big 12/SEC challenge is this one, where two of the best programs and two of the best players in Ochai Agbaji and Oscar Tshiebwe take each other on. This will be a high-action game, and like the Florida game, the final score could rely a lot on whether one of their top guys is healthy, TyTy Washington being the guy in this case. Both teams are coming off overtime games, Kansas going to double overtime, so it will be interesting to see if fatigue plays a part.

If you can only watch one game in the Big 12/ SEC challenge, make sure you watch this one because it will be incredible.

Texas Tech has been incredible this year, but Mississippi State has been no pushover this year, taking Kentucky to overtime on the road last game. This will be a terrific matchup between Iverson Molinar and Terrence Shannon, two high-level scorers. Mississippi State will need a lot of help because the combo of Texas Tech’s defense plus being at home hasn’t been great for any teams this season.

The final game of the Big 12/SEC challenge is a standalone game being called the Rick Barnes homecoming. Barnes was the coach of Texas before taking the Tennessee job, and he wants to prove that he made the right decision.

Texas on the other hand has something they want to prove as well, and that is they are a title threat that many people envisioned them to be when the season started. Texas has not picked up a ranked win, so this will be a great chance to do so at home. Tennessee on the other hand has picked up big ranked wins against Arizona and LSU, but lost by 28 to Kentucky. Both teams understand the implications, and that should make this one a fun one.