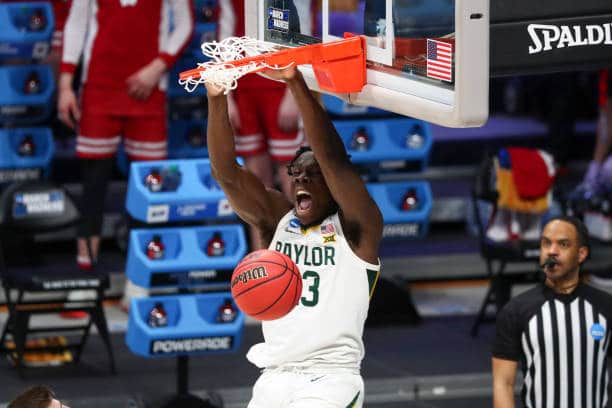 For gamblers, this game did not favor the over club. Instead, it was Baylor basketball’s intensity that led them to the 21-point win on Sunday over Villanova, 57-36. 36 points are the lowest scoring total for Villanova since 1977-78 and are the lowest in the Jay Wright era.

Baylor has won eight straight games against Top 10 teams. They hold the nation’s longest winning streak at 15 and a 34 game nonn-conference winning streak, dating back to December 2018.

In a game that did not see success from beyond the arc, scoring near the rim was a major key. Baylor finished with two players in double figures but got great defensive efforts and a career game for senior guard James Akinjo.

Baylor held Villanova to two of 11 to begin the game from the field and seven points in the first eleven minutes. Neither team was able to make the long ball, but Baylor got great points in the paint from junior forward Jonathon Tchamwa-Tchatchoua and freshman forward Jeremy Sochan.

The duo combined for 16 points and 19 rebounds off the bench. Senior guard Matthew Mayer had his least productive day from the field with just one make on eight attempts but was crucial behind the Bears stout defense.

1. The most impressive defensive performance of the season by Baylor Basketball

Villanova’s 15 points in the first half were the lowest total of the past decade and senior guard Collin Gillespie was the lone player to make more than one field goal.

The Wildcats average nine turnovers per game but had seven in the first half and were held to 5-24 from the field at 21%.

The Wildcats finished 12-54 from the field and had more turnovers than shots made at 13.

Although the Bears relied on their defense, there were instances where the offense looked clueless and worrisome of that consistency throughout the seaosn.

Some of the Bears’ best offensive weapons were held quiet. Mayer had three points, while the team leading scorer in sophomore guard LJ Cryer made just two shots, alongside freshman forward Kendall Brown’s first game in single digits on the season.

Baylor basketball made six of their 24 three-point shots and 39.3% from the field. Although that can win you games sometimes, it is not sustainable. Villanova basketball is still a very solid squad with a ton of returning production.

In a road environment against the likes of Kansas and Texas, Baylor basketball may not be that fortunate on defense.

There are many positives to take from the game, and the Bears are still outscoring opponents by over 25 per game. However, an area to look forward to, especially in road games that will start on Saturday.

Considering the circumstances and the environment, Akinjo shined on the biggest stage of his career so far in Waco.

The guard was crafty near the rim when the shots weren’t falling from beyond the arc.

Akinjo has had to find a way to gel with the team and learn on occasion to not be the No.1 scorer. Today was a different story and when they needed him, he delivered for the Bears.

With the Bears re-loading and a couple of teams losing games early on, they have quickly risen to the top as they should be the fourth straight new number one team in the country when the AP Poll comes out tomorrow.

Baylor basketball’s next game is on the road on Saturday at 9 p.m. on ESPN2 against Oregon.

One thought on “No. 2 Baylor Basketball Crushes No. 6 Villanova: Three takeaways”