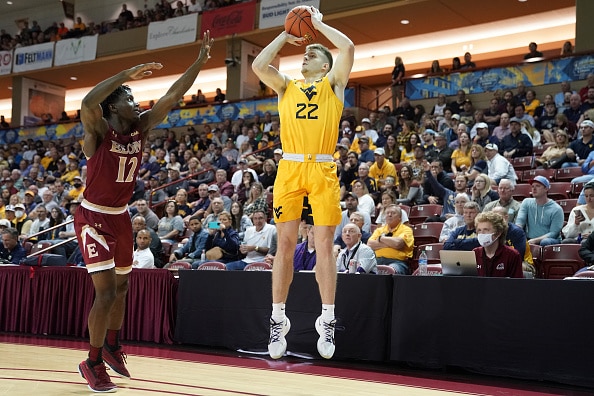 Six out of ten teams remain undefeated as we look at the Week 2 Big 12 basketball power rankings.

Matchup to watch: Kansas vs Alabama (if they play)/ Oklahoma vs UCF

Sneaky good matchup of the week: TCU vs Santa Clara

In a pretty quiet week, Kansas did what needed to be done, beating Stony Brook by almost 30. They did show they aren’t perfect, only leading by 6 at the half, but another strong performance by Ochai Agbaji allowed them to pull away. They have a busy week ahead at the ESPN Events Invitational, where they could potentially play their first-ranked opponent of the year in Alabama.

Baylor took care of business this week, beating all three opponents by an average of 37 points per game. LJ Cryer scored 20+ in all three games and is looking like he could be the lead guy. Baylor gets to play in what might be the best of the feast week tournaments, the Battle 4 Atlantis, where every team has a serious chance to make the NCAA Tournament and maybe better. This week should tell whether Scott Drew’s team should be seen as one of the top teams again or not.

While people may think it’s annoying to see Texas Tech this high despite not having any real competition, they’re doing exactly what needs to be done, beating these teams by a large margin. With star Terrence Shannon now back, this team will be a force to reckon with, but we won’t get to see how good they really are again due to an easy week. With a bunch of Big 12 teams taking on big-time opponents in tournaments, their results can hurt Texas Tech’s ranking in next week’s Big 12 basketball power rankings, even if they blow out the two teams they play this week.

It’s weird to see a team jump up two spots after losing, especially when so many teams went undefeated this week, but them hanging in with Marquette and then getting the third-best win in the Big 12 so far (after Kansas beating Michigan State and Oklahoma St vs NC St), that’s enough for the bump. Coach Huggins continues to climb up the win ladder and Taz Sherman continues to play at a high level. They get an easy week after the three games in four days.

Yes, it’s true that Texas isn’t the 5th best team in the Big 12, they are probably two or three, but we are solely judging off the first two weeks, and so far they don’t have the resume to stack up against the five ahead of them. Their biggest win is against 3-3 North Colorado (and by only 13), and that one loss really hurts especially with how good the Big 12 has been. This week they take on the surprisingly undefeated Cal Baptist.

After their disappointing loss to Oakland and falling to the bottom of the big 12 basketball power rankings last week, Oklahoma State responded in a big way this week, blowing out Umass Lowell and then beating a good NC State team in a neutral location. Kalib Boone stepped up in a big way against NC State, and this team continues to prove that on any given night a new guy can step up. They take on Max Abmas and Oral Roberts this week in what should be a high-scoring affair.

Yes, Oklahoma made it to the final of the Myrtle Beach Invitational, but the reason why they dropped is they didn’t really have a tough road to get there. ECU, who I picked as the sneaky good game of the week, lived up to that, and then Indiana State got demolished by the Sooners. If they had beat Utah State, this would be a completely different story, but since they didn’t they don’t have a resume like the others. They’ll have an awesome chance on Saturday to boost their resume against UCF on the road.

Iowa State won two games last year, so the fact they have doubled that already should earn them the #1 rank. Unfortunately, it looks like their win streak will end this week, as they will #25 Xavier in the first game and then either #9 Memphis or 5-0 Virginia Tech after that in the Upsie NIT Tip-Off. This team is certainly heading in the right direction and will definitely win over 1 game in the Big 12.

TCU took care of business with a 2-0 week, but only winning by 13 against Nicholls knocked them down a few notches, especially after Baylor beat them by 29 earlier that week. Mike Miles continues to show he’s a top 5 player in the Big 12, leading TCU in scoring all three games. TCU takes on a talented Santa Clara team on Monday in their most important matchup of the season so far.

There are very few teams who have only played 2 games, and Kansas State is one of them. The lack of games and competition is what has them in the last position, despite the undefeated record. This week probably won’t treat them too well, as they will have to take on a top 15 team in Arkansas and then either another top 15 team in Illinois or undefeated Cincinnati.