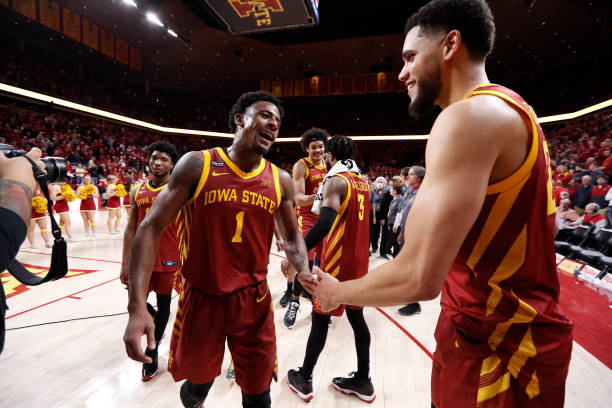 Iowa State basketball took down Iowa 73-53 to become 9-0. The Hawkeyes had a lot of miscues and the solid play of the Cyclones was too much to be overcome. The Cyclones caused 12 turnovers against a team that averages just under eight per game. Beyond that, Iowa basketball could not find a shooting rhythm. Coach T.J Otzelberger and his team must have felt disrespected this year being picked to finish last in the Big 12 as they look ready to wreak some havoc in the conference.

America is running out of adjectives for T.J. Otzelberger. Iowa State was picked last in the Big 12, but Cyclones are now 9-0 after a 20-point decimation of Iowa. Hilton Magic is back.

In the second half, Otzelberger somehow managed to keep Iowa State’s intensity on defense. At one point, Keegan Murray had a breakaway dunk, but the Cyclones ran back in transition defense on a play where many would have just laid off of. Iowa State basketball had limited defensive breakdowns, outrebounded the Hawkeyes 50-32, and grabbed 21 offensive rebounds in the process. They clogged up lanes, made passes difficult, and had a great help defense that menaced Iowa all night.

Coach Fran McCaffery has brought a culture of the fight. Getting down by 20 points, Iowa basketball continued its defense and pressure. The Hawkeyes forced the Cyclones into a hurry-up, leading to turnovers, errors, and at the very least, time off the clock. But Iowa basketball struggled on the offensive end. When given the opportunity, they could not convert. There seemed to be a lid on the basket for Iowa, and it was just too much for the Hawkeyes to overcome. It took almost 27 minutes for Keegan Murray to hit a field goal. The Hawkeyes needed to be more aggressive on offense as a lot of the team’s success came from the free-throw line.

Takeaway #3: Iowa State basketball moves with and without the ball

Iowa State wore out Iowa’s players. The constant movement is not only on offense with and without the ball. The Cyclones worked the ball in, out, side-to-side and rarely had to fight for a shot. Izaiah Brockington’s shot-making ability was a thing of beauty. He started the game going 9-of-9 from the field. Iowa State basketball’s unselfish play led to 18 assists, often opening looks and hitting hot cuts. While the Cyclones had a solid shooting night, the team was the most effective off-ball screens and had some great pick and rolls when a team can move the ball so effectively, scoring easy as the cyclones were 27-of-62 from the floor for 43.5%.