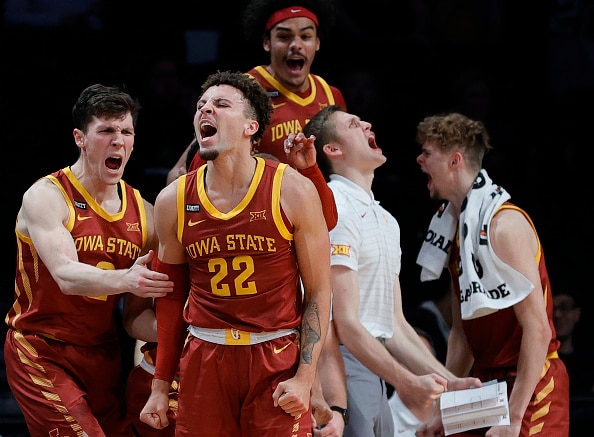 Baylor proved this week that even though they lost a lot of talent from their championship run last year, they are more than capable of going back to back. They took on three very competitive teams in the Battle 4 Atlantis and won each one, including a comfortable win against a really good Michigan State team in the final. Right now, it seems like Baylor is the team to beat in the Big 12, but there is still a lot of time left in the season for that to change. They take a much easier workload this week with the sole game against 0-7 Arkansas Pine Bluff.

If I told you at the end of last season that not only would Iowa State be 6-0, but two of those wins would be against ranked teams including a top ten team, you’d want me drug tested immediately. But this is all true, as Iowa State has been this year’s surprise thanks to two Big Ten transfers Gabe Kalscheur and Izaiah Brockington, and the talented freshman point guard Tyrese Hunter. Kalschuer and Brockington both dropped 30 points this week and Hunter has led the team in assists in five of their first six games. Something is brewing in Ames, and a road game in Nebraska against Creighton will be another great test to see what this team is capable of.

Yes, it isn’t fair to rank Tech this high when they have only played cupcakes while everyone else in the Big 12 has had at least one true test, but the margin of victory they keep winning these games by makes it hard to punish them for their success. They are beating their opponents by an average of 31 points per game and have scored at least 84 points in each game. They finally get their first true test in the Big 12/ Big East challenge against Providence on Wednesday.

Kansas suffered the biggest ranked loss on a buzzer-beater against what has been a subpar Dayton team on Friday. They played well in the other two games, but this team is far from what people expected at the start of the season. Jalen Wilson hasn’t found his groove yet since returning from suspension, and David McCormack has really struggled as we saw at the beginning of last season.

The good news is that Ochai Agbaji continues to play well, Remy Martin is starting to become more comfortable shooting and Christian Braun had a great tournament, being the only Jayhawk to make the ESPN Events Invitational team. After the disappointing weekend, Kansas will have a few days to prepare before heading over to St. Johns in a big-time matchup.

While Cal Baptist at no means is a resume-altering win, they are very underrated, and beating them in that fashion looks great for Texas. Timmy Allen has surprisingly been their best player, and slowly but surely they are starting to build that chemistry needed. They have another easy week this week where they should beat both teams by a large margin.

Oklahoma State almost suffered loss number two this week when Oral Roberts nearly pulled off the victory, but Oklahoma State stayed strong and increased their win streak to five games. Oklahoma State has already had an extremely tough nonconference, taking on two good teams in NC State and Oral Roberts, and it will only get tougher when they play two tough matchups in Wichita State and Xavier this week. If they can go two for two, they may see a big jump in next week’s power rankings.

The difference between West Virginia and Oklahoma for the 7th spot is paper-thin, with the only difference really being West Virginia’s win over Clemson. West Virginia was in a surprisingly close battle with Eastern Kentucky, who sit at 5-3, but another big game by Taz Sherman helped them get there. West Virginia hasn’t proved they can compete with the top dogs in the Big 12 yet, but have been a good team so far regardless.

Oklahoma had themselves a nice week, picking up two good wins including one against then undefeated UCF to improve to 6-1. They continue to play good defense and are a big win away from people taking notice of them. Luckily, they’ll have this chance against a red hot Florida team who have already beaten Florida State and Ohio State this season.

Rarely do you see a team that loses two out of three games in a week move up, especially in a conference where they are the only team in the conference with two losses, but their ability to hold their own against two top 15 teams at the time earns them a move up. Since we’ve seen so few Big 12 teams take on Top 25 teams so far, losing by single digits is a plus. They also doubled the score of their next opponent which helps. If they can beat Wichita State, who have been solid this season, then people will start taking this Wildcat team more seriously.

My sneaky good matchup of the week was the Santa Clara game, and it was far from that, as Santa Clara won by nearly 20. They then only beat a 2-6 team by single digits. This TCU team has the talent, they just haven’t proven that they will be able to compete in the Big 12 this year yet. They’ll get an opportunity to earn respect against Oral Roberts this week, who Oklahoma State narrowly beat this week.