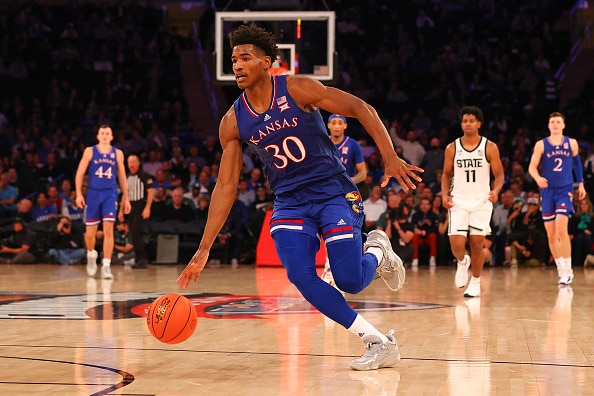 Matchup to Watch: Baylor vs Stanford

Sneaky good matchup of the week: Oklahoma vs East Carolina

After a dominant week, Kansas has proved to the country that not only are they the best team in the Big 12 right now but one of the best in the country. The Jayhawks completely outplayed Michigan State in the Champion’s Classic and proved that their depth is scary for any opponent. Ochai Agbaji has improved once again and will be a contender for the Wooden Award at the end of the season. They have an easy matchup against Stony Brook this Thursday at home.

Baylor had a very quiet week 1, with only one game played, and a simple one at that. This picks up greatly with three games in five days, including what could be a good game vs Stanford on Saturday. Matthew Mayer looked good in the team’s debut, and they will rely on him throughout the year for these types of performances.

Texas Tech took care of business this week, and that’s enough to earn them the third spot in the Big 12 basketball power rankings. Without Shannon, they’re still incredibly deep and this will show once the competition gets more difficult. They won’t have that chance yet to showcase what they have, but as long as they keep winning these games convincingly they’ll be just fine.

Let’s ignore the Houston Baptist game and go straight to the Gonzaga game. Despite the score, Texas was completely outplayed, with Drew Timme looking like he was playing against Texas State, not Texas. The Longhorns have a lot to work on before conference play and will have to develop some kind of chemistry, especially with the number of new players and a new coach. This Texas team is still very dangerous, but we will have to look at the new few weeks to see how much of a threat can be in the long term.

What Oklahoma did to UTSA is cruel. They have looked extremely dominant through the first two games, and Tanner Groves is a big reason why. He’s led them in scoring both games and has done everything and more that they’ve asked of him. Oklahoma only allowed 10 points in the first half to UTSA, showing just how scary the Porter Moser defense will be. They take on a similar opponent this week.

So far, West Virginia has shut down any of the concerns that people had for them going into the season. They started off by taking down an Oakland team that beat conference rival Oklahoma State, then beat Pittsburgh, which is one of the worst Power 6 opponents to beat but a win nonetheless. Coach Huggins continues to climb the win total standings without a hall of fame spot, and he will most likely continue on Thursday against Elon.

Iowa State not in 10th? This must be a miracle! Truthfully, Iowa State has been good for their recent standards and impressed many when they took down Oregon State at home. Gabe Kalscheur, the former Minnesota Gopher, has been a huge addition for the Cyclones this year, leading them in scoring both games. Iowa State is already looking significantly improved from last year, and while they will still most likely end at the bottom, they should be a decent team to watch in nonconference.

Being 8th is not their fault, it’s solely because they only played one game. Mike Miles is primed for a breakout year, and he looked the part in the first game. This is a team that can stay competitive in any game, and this was a great start for them.

Like TCU, playing only one game is a big reason why they are here, and the tiebreaker is the score differential between relatively similar opponents. Kansas State will get another easy week with only one game, then will head to the Hall of Fame Classic and take on Arkansas and either Cincinnati or Illinois in back-to-back days.

Oklahoma State fans, before you head to the comments and roast this article, just remember it’s solely based on Week 1 performances. There were only two Big 12 teams that lost games, and one of those was Texas who lost to the best team in the country. Oakland was projected to finish in the middle of their conference and West Virginia beat them by 7. Now, I’d be willing to bet a lot of money they don’t see themselves in this spot for much longer, but for the time being, they are. They take on a much lighter workload this week with the one game vs Umass Lowell.