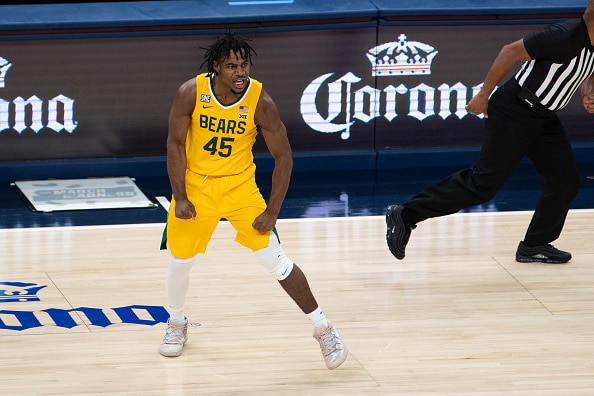 Our first team in the Big 12 basketball power rankings, and probably the team that will stay there for most of the season is the Baylor Bears. This Baylor Bear team is legit. They have two great scorers in the backcourt in Jared Butler and MaCio Teague, a rebounding machine in Mark Vital, and 5 other guys who can score double digits on any given night. It is a huge pity that their matchup against #1 Gonzaga was cancelled, but they showed how talented they are in their win against Illinois. The matchup against Texas is one to look forward to after a bye game against Nicholls on Tuesday was cancelled.

Remember, this isn’t based on standings in the polls, this is based on who has looked better. West Virginia have had similar schedules, and it comes down to West Virginia looking a lot better against Gonzaga. West Virginia has already picked up a good non-conference resume wins in Western Kentucky and could pick up another if they beat Richmond next Sunday. The frontcourt of Derek Culver and Oscar Tschiebwe has been dominant these past 5 games, but it’s Miles McBride the guard who has really developed and has knocked down a lot of big shots.

The biggest surprise in the Big 12 right now is the Texas Longhorns. The chemistry is definitely there, and they look stronger the more they’ve played. They backcourt of Coleman and Ramey are both averaging over 15 points, and Kai Jones has come out of nowhere and has looked like the most improved player in all of college basketball. The game against Baylor should be exciting, and if they can beat them then we might see Texas being named the Big 12 champs in a few months.

The 4-1 Record and #5 rank in the AP Poll doesn’t really correlate with how Kansas has played this year. The win against Kentucky could either look good or meaningless on selection Sunday depending on if they can improve, and they nearly lost to a winless North Dakota State team at home. Nonetheless, they still stand a 4-1, and if they beat Creighton on Tuesday, then they will once again earn the respect of the college basketball fans.

Texas Tech comes in at #5 in the Big 12 basketball power rankings. This Tech team hasn’t had a tough schedule besides the Houston game, but they’re beating these teams by over 40, which means that they know what they’re doing. They don’t have any games this week that can really prove themselves, but with conference play starting soon, we’ll be able to evaluate this team.

Oklahoma State has nothing to play for with a postseason ban, but they sure are playing well. They picked up a big win this week against Marquette, who upset then #4 Wisconsin, and maintain an undefeated record. Cade Cunningham is playing like the #1 pick in the draft and will be huge in Oklahoma State’s attempt to compete in this talented Big 12. The matchup against Wichita State could be interesting but Oklahoma State should win.

Technically, Oklahoma is first in the Big 12 thanks to the conference win against TCU. The Sooners started their season a little later than most teams but have taken advantage. The two headed monster of Brady Manek and Austin Reaves are both dangerous scoring threats and can knock down a three when needed. The Xavier game will be a big test for the Sooners.

TCU looked a lot better than people expected to start the season. They competed well against Oklahoma, and they’ve had a lot of different guys step up in their 5 games. TCU faces two big non-conference opponents next week and based on how those go we should be able to conclude if they’ll have a chance to compete with anyone in conference play.

Iowa State is pretty bad, but they’re not worse than Kansas State. If they can pull out a miracle and beat Iowa, then they’ll earn some respect but all signs point towards that not happening.

Kansas State finishes last in the Big 12 basketball power rankings. This Kansas State team might be the worst Power 6 team. They don’t look like they can beat a Division 1 team and probably won’t succeed in the Big 12. If they lose one of these two games this week, it might be time to start looking forward to next season.