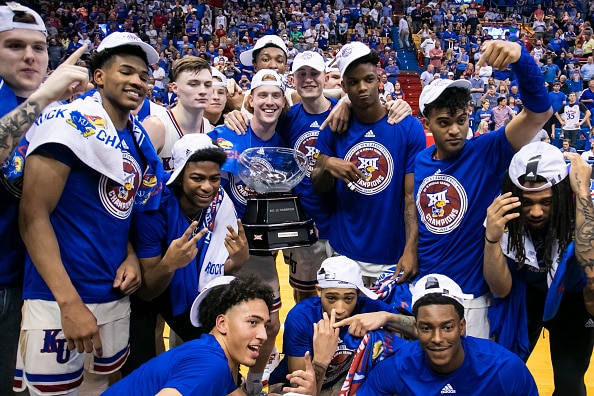 The reigning National Champion Kansas Jayhawks look to defend their title, something that hasn’t been done in 15 years.

CBB Review is once again ranking the top 100 teams heading into the 2022-23 season. Each day we will reveal the next team until we reach the team slotted at number one. Coming in ranked number 4 are the Kansas Jayhawks.

A Caleb Love missed three and the sound of the buzzer symbolized the end of the 2021-2022 college basketball season, and the Kansas Jayhawks were the last ones standing. It was their first win since 2008, and Bill Self’s second overall, becoming the only active coach with two championships amid the retiring of Coach K and Jay Wright. They were led by guys like Ochai Agbaji, Christian Braun, David McCormack, and even Remy Martin.

Those guys are all gone, but the Jayhawks still have the depth and talent to compete for the championship once again and potentially become the first team to go back-to-back since the Florida Gators did so in 2006 and 2007. The return of Jalen Wilson, the transfer pickup of Kevin McCullar, and the freshman class ranked as one of the best in the country are some of the many reasons the Jayhawks see themselves as a Top 5 team in Cbb Rank.

Did not play last season

Wilson comes into this season as a top 20 player in the country and could finish even higher this year. Wilson was one of the top guys on that championship team, and with a bulk of the talent gone, his role will increase even more and this could lead to an impressive season. Wilson can rebound well and is a solid driver. The three-point shot isn’t exactly his specialty, but he makes enough where you can’t allow him to take the open one. If he can get that shooting splits up, he will be incredibly dangerous for the Kansas Jayhawks.

For the first time in a while, Kansas basketball doesn’t have a go to guy at center. We’ve seen David McCormack, Udoka Azubuike, and Perry Ellis hold down the center position for over a decade, but we are left with no clear option with McCormack graduating. Enter Ernest Udeh. Udeh has the body of a traditional big man and looked dominant in high school. Bill Self’s offense has always revolved around the center, so demand is high.

There are plenty of options for the Jayhawks, but Udeh fits best, and he’ll have to prove that. If he can be a high major level college basketball center from Day 1, then this Kansas Jayhawks team could be close to unstoppable. If there are growing pains, Big 12 opponents will capitalize on this mismatch and dominate down low.

Analytic to Know: 1st in Strength in Schedule

What is the key to a championship for the Jayhawks? A strength of schedule ranked first in all of college basketball. Playing these tough matchups before the tournament prepares a team for the tournament, which features no bye games.

With the Big 12 projected to be extremely difficult and several high-ranking non-conference matchups, expect the Jayhawks to once again be prepared for any team they face come tournament time, and that level of experience might be what it takes to push them further and further into the tournament.

Second, they need the underclassmen to step up. Guys like KJ Adams, Zach Clemence, and Bobby Pettiford showed signs last year but didn’t get enough playing time to really make a statement. Now, they will all receive increased roles, and the Jayhawks are expecting major development from all of them. The freshmen also need to provide value, especially Gradey Dick, a prospect that many Jayhawk fans are excited about.

Third, the Jayhawks need someone to step up and take that go to role. We saw Agbaji do it last year, and he was a huge reason why Kansas was able to win many games. People are expecting Wilson to do so, but if he can’t, guys like McCullar or Dick will need to step up and become the established number one option. If the Jayhawks can cross off all three of these, it will be incredibly difficult to beat them.

As per usual, the Kansas Jayhawks face several tough nonconference opponents, including Duke in the Champions Classic while Coach Self is suspended, Kentucky on the road, projected Big Ten winner Indiana, and Seton Hall. This is all on top of the Battle 4 Atlantis, which features several potential tournament teams in BYU, Dayton, USC, Butler, and Tennessee. Kansas always plays a tough nonconference schedule, and this season will be no different, so we will get a good idea of how legitimate Kansas basketball will be before conference play commences.

As if the nonconference wasn’t hard enough they will have to play in a Big 12 that features ten teams who could all realistically make the NCAA Tournament. Baylor will challenge them for the Big 12 title once again, and Texas, TCU, and several other schools are not far behind him. The Big 12 isn’t a lock for the Kansas Jayhawks as we saw so many seasons in a row, and this rigorous schedule will help them prepare for whatever six teams the Jayhawks will hope to face in the tournament.