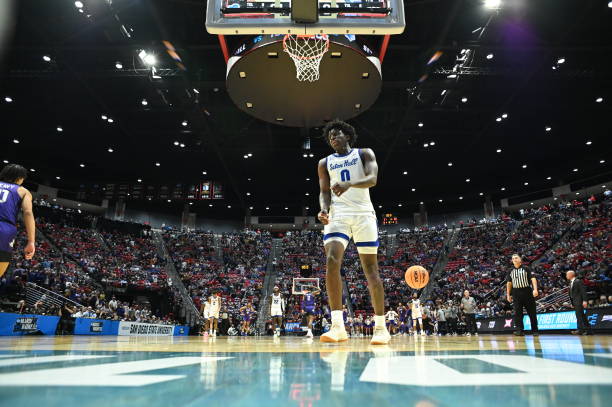 The Seton Hall Pirates welcome back Shaheen Holloway to South Orange, hoping he can keep The Hall at the top of the Big East.

CBB Review is once again ranking the top 100 teams heading into the 2022-23 season. Each day we will reveal the next team until we reach the team slotted at number one. Coming in ranked number 47 are the Seton Hall Pirates.

Seton Hall made a splash in the offseason when it hired Shaheen Holloway – fresh off an Elite 8 run with Saint Peter’s – to replace Kevin Willard who left for Maryland.

Already, Holloway has installed a grit and grind attitude to 400 South Orange Ave., which shouldn’t come as a surprise. The Pirates played tough under Willard and Holloway was an assistant under him from 2010-18. Now, Holloway gets to install his own philosophies to a Seton Hall Pirates team eager to continue on a recent string of success.

Despite the coaching change, the Pirates are deep. Expect players 1-9 in the projected rotation to all earn valuable minutes. In fact, the most complex challenge for coach Holloway might be coming up with a rotation, because of the overall talent that goes deep into the bench.

Year one at Seton Hall for Richmond was met with some ups and downs. He was called upon to start and then quickly taken out and re-inserted into the starting lineup multiple times. Richmond finally became a mainstay on January 22nd, despite a 3-of-19 performance from the field.

Efficiency wasn’t always an issue for the Syracuse transfer, who dropped a career-high 27 points on 13 shots off the bench at home in a win against UConn. Richmond’s playmaking skills also shined through, clearly showcasing his unique skillset as a 6-6 guard.

Now, Richmond can totally focus on leading this team. While the Seton Hall Pirates have an influx of depth, Richmond was already to only true point guard on the roster last season. With Bryce Aiken gone, it opens the door even more for Richmond to make plays with the ball in his hands.

If Kadary can step up and deliver more points, it could give Seton Hall an added boost. However, his biggest calling card is setting up other Pirates for points, and this year, there’s a lot to go around.

One player Pirates fans would love to see succeed is Tyrese Samuel. As a freshman, he showed enough promise to potentially be an NBA player down the line. At the very least, Samuel looked like he could be a go-to player for the Pirates as an upperclassman.

While he’s continued to improve, it’s been slow and steady, and not a bigger leap like some people expected. However, sometimes all a player needs is one year, and Samuel’s senior season could be it.

At 6-10 and 235 pounds, Samuel likes to stretch out to the three-point line but also has the height to do work on the glass and finish in the paint. At times, he can become over-reliant from behind the arc, but last season, it seemed as if Samuel was becoming more aggressive in the low post.

The Pirates have depth at every position, so right now, based on track records, there’s a good chance Samuel could come off the bench. Alexis Yetna is the top returning rebounder, and Tray Jackson showed flashes of being a go-to scorer. However, Samuel could push for the starting lineup if he comes ready to play aggressively and shows more improvements. Either way, it’ll create healthy competition and give the Seton Hall Pirates a great bench option at power forward.

There were a few areas the Seton Hall Pirates struggled with. One of them was efficiency. The Pirates only shot the ball at 46.6% from 2-point range last season. Yetna had his struggles down low and so did Samuel – two returning players down low.

But I chose to go with assists because better passing should in turn lead to easier buckets inside. Seton Hall only averaged 10.3 assists per game last season. The only power-six team who finished worse than the Pirates was Washington (10.2 APG),

The problem last year wasn’t that guys like Kadary Richmond and Jared Rhoden couldn’t make nifty passes. Instead, the Pirates just liked to dribble the ball and utilize their isolation skills. However, by adding Al-Amir Dawes and Femi Odukale, Seton Hall brings in a pair of transfers who are adept at moving the basketball.

KC Ndefo, who played under Holloway at Saint Peter’s is also a very notable passer at 6-7.

By bringing in a few more players who don’t rely on isolation and one-on-one basketball, it could make a clear difference for a team that was in the bottom 25 in assists per game last season.

The most intriguing part about Seton Hall is its depth. Nine players on this team averaged at least six points per game last season and only one of them (KC Ndefo) didn’t do it at the power-six level. Impressively, Ndefo is arguably the Pirates’ most versatile player.

Because of that depth, there are many possibilities for a starting lineup and overall rotation. If Holloway wants more shooting, insert Jamir Harris. If rebounding is the issue, Samuel can slot into the four and Jackson can play the three.

There are also three freshmen who were highly recruited out of high school. Tae Davis and his brother Dre both come from Louisville. Dre was a key component for the Cardinals last season and is another player who could earn valuable minutes for the Pirates this season.

The Seton Hall Pirates also continue to schedule tough in the non-conference. The Hall will play games against Kansas, Iowa, Memphis, and Rutgers before Big East play starts. The game against Memphis is part of a tournament that also includes Florida State, Oklahoma, Ole Miss, Stanford, Nebraska, and Siena. There’s a chance the Pirates play five games against other power-six opponents, plus Memphis, before its first Big East game against Providence.

Seton Hall always seems to re-load and this season doesn’t appear to be any different. Of course, with any coaching change, there will be questions. But the Pirates keep a solid core together and arguably add even more talent than they had last year, on a team that made the NCAA Tournament is an 8-seed.