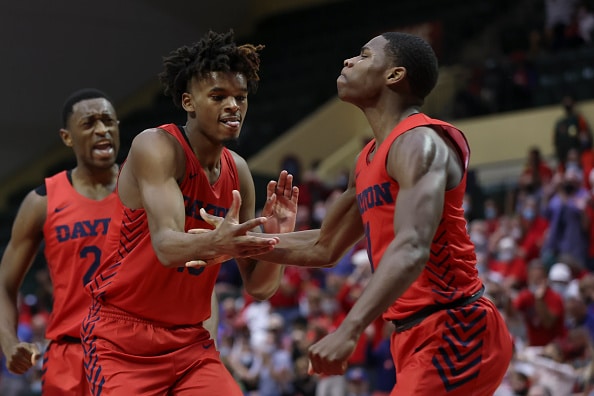 After falling just barely short of the NCAA Tournament last season, the Dayton Flyers bring back a top-25 roster.

CBB Review is once again ranking the top 100 teams heading into the 2022-23 season. Each day we will reveal the next team until we reach the team slotted at number one. Coming in ranked number 22 are the Dayton Flyers.

It was a promising regular season for Dayton in 2021-22, one in which they went 15-5 in Atlantic 10 play and took down Kansas in the non-conference. However, because of some early struggles, as well as an upset loss in the A10 tournament semi-finals, the Flyers saw themselves in the First Four Out.

One thing is clear though: Anthony Grant can flat out coach. From VCU to Alabama to Dayton, Grant has produced nothing but winning programs. The personnel he brings this year is not too bad either. Essentially last year’s entire rotation remains in the program. For starters, this includes two preseason A10 members in Day’Ron Holmes and Malachi Smith. Holmes in particular is a heavy candidate for the conference’s Player of the Year award.

Going into this season, the Dayton Flyers are poised to cement themselves on top of the conference and make a statement nationally.

Holmes entered the Atlantic 10 last season as a highly regarded recruit and won every single accolade you can think of. He was an All-Conference member, All-A10 Tournament member, on the All-Defensive team, and the conference’s Rookie of the Year. The sky is the limit for what Holmes could do with another year at Dayton.

If you’re trying to defend Holmes, you can not let him get the ball in the post or else you are already in trouble. The issue is how skilled he is at establishing positioning as well. On shots at the rim, Holmes was nearly at an 80% efficiency rate last season.

If he wants to truly become A10 Player of the Year though, he must truly establish a perimeter shot. Holmes went just 1-7 from behind the arc in 2021-22. As a recruit, he did show the ability to hit the occasional jumper and if he does, it will cement him as an NBA prospect.

With Holmes at the center spot, Camara spends most of his time as a stretch four. His initial destination was Georgia for a couple of years before eventually transferring to Dayton. Another former top 100 recruit, Camara has shown promise but needs to polish some aspects of his game before truly breaking out.

First off, Camara is very skilled in putting the ball on the deck and making plays off the dribble. This has also led to issues, such as his 24.1% turnover rate, which is in the bottom 25% of Division I.

As far as three-point shooting goes, Camara has improved drastically every year, in both volume and efficiency. In his first year, he barely even bothered to shoot the rock, then improved to a modest 26.3%, before his previous total of a more respectable 33.8%. If Camara continues that trend in this coming season, he will be a dangerous force in the front court to complement Holmes.

As a slow, methodical team that likes to savor possessions, it is important to shoot the ball efficiently. Dayton exhibited great shot selection last season, shooting 53.8% from within the arc (37th) and 36.1% from three point range (51st). Even though they are mediocre when it comes to rebounding and ball security, this trend has helped their offense become most successful. Additionally, it goes both ways where defensively, the Flyers allowed an effective field goal rate of just 46.9%.

Dayton is quite dangerous, not just from an Atlantic 10 perspective but nationally as well. They received a spot in the preseason AP Top 25 poll and for good reason.

The non-conference slate features a few challenges, including a road visit to Virginia Tech and potential neutral site meetings with Kansas and Tennessee. However, the Flyers can take down any of them on a given night. I mean, look what they did to the eventual National Champions last season.

The key will be getting off to a hotter start though. Dayton should be pretty decent favorites in each of their first five games and has to take care of business. Last year, the Flyers had a few rough outings in November which may have been what eventually kept them out of the dance.