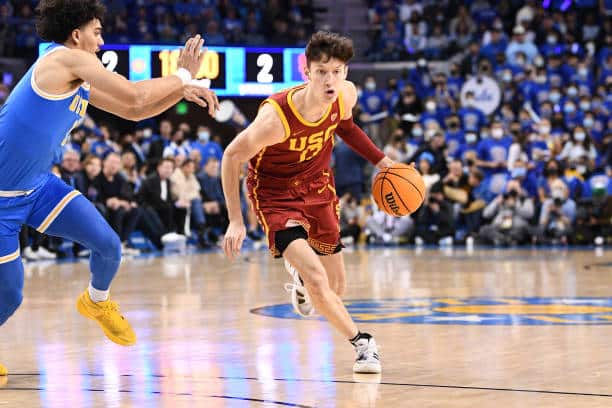 The USC Trojans look to fuel another successful season with one of the top freshmen classes in the country.

CBB Review is once again ranking the top 100 teams heading into the 2022-23 season. Each day we will reveal the next team until we reach the team slotted at number one. Coming in ranked number 35 are the USC Trojans.

USC had a pretty successful regular season, but they were not able to turn that into any post season success. This is a team that lost two of their starters and leading scorers, but they were able to replenish with the number 7 overall recruited class. Coach Andy Enfield has started to have success at USC, and a class featuring 3 players ranked in the top 50 is only going to help. This year will be tougher as he will not have either of the Mobley brothers, who have gone to the NBA draft in consecutive seasons.

The USC Trojans do return two really key pieces from last season that will be looked at to get a lot of the scoring done.

Drew Peterson is coming off of an All Pac-12 First Team selection. With multiple starters gone, he is going to be even more important for USC. He is a tall guard at 6’9, but he is effective. He is comfortable playing both on ball and off ball, mixing in both pick and roll reps and spot up attempts.

If he adds more a more efficient drive, he will become a really difficult player to guard (and possible pro). His length allows him to be less deterred by contests which will prove useful this season again.

The 6-3 point guard was a great scorer last season for the USC Trojans. He handled a lot of the pick and roll distribution, and was fairly efficient in it too. He was also the one who would push the pace for the Trojans, getting them some easy buckets in the fast break.

Ellis works well with Pederson because he can also play both on and off of the ball. He is just as comfortable running pick and roll or spotting up on the wing. He was a good shooter last season, and he shot extremely well on open catch and shoot 3s. Look for him to be the beneficiary of some Pederson drives this season.

Although USC was a respectable 45th best defense, they were one of the best teams at altering shots. This was primarily led by NBA player Isaiah Mobley. Vincent Iwuchukwu projects to fill into that role when becoming healthy. USC did not force turnovers, so it was really important that they made teams take very tough shots.

The USC Trojans will have a few fun matchups in their non-conference schedule, highlighted by matchups against BYU, Tennessee, Auburn, and Colorado State. There will be some tough matchups in there that should give fans a feel of how this season will go.

The Pac 12 will be solid once again, and there will be some really difficult matchups as well as some ones that should be wins for USC. There is a little bit of a projected drop off from USC and the next ranked Pac-12 team, Stanford.

This USC Trojans team is going to have a lot of questions, mainly due to their lack of depth. They are going to have to rely on multiple freshman to contribute significant minutes right away. Drew Peterson should once again be one of the best players in the Pac-12, and point guard Boogie Ellis will be great at dealing with ball handling responsibilities.

One thing to monitor will be the health of Vincent Iwuchukwu. Over the summer he stated that he suffered cardiac arrest, and he had to be hospitalized for a few days. Recovery appears to be going well which is fantastic. There is nothing on when he will return to games or if he will be ready for the start of the season.