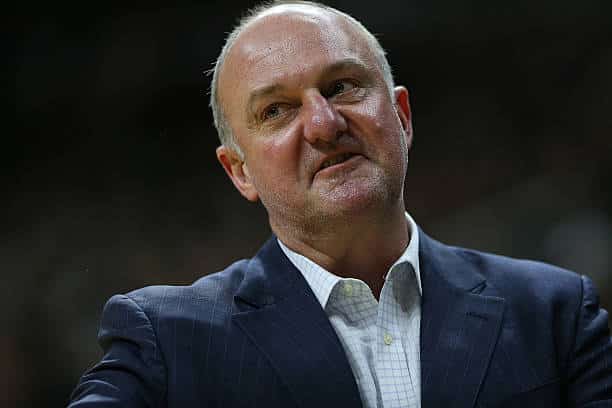 There is a new confidence and hope as Thad Matta returns to the Butler Bulldogs to coach at his alma mater.

The countdown is officially on. For the second straight year, CBB Review has ranked the top 100 teams in college basketball heading into next season. We will reveal the next team daily until we get to number one. Our number 82 ranked team is the Butler Bulldogs.

In addition to a new coach, Butler brings in 5 new players to mesh with their returning roster. They return their leading scorer in Chuck Harris, but they lost the rest of their starting 5. Thad Matta was able to bring in some veteran talent that will be able to plug some holes of the roster from that start. Matta will look to provide a spark to an offense that was lackluster the previous season.

Chuck Harris returns to the Butler Bulldogs as their leading scorer from last season. He is the true definition of a combo guard, being able to handle the ball but also play off the ball on the perimeter, both with a very high volume. He is a good pull-up shooter which makes him difficult to guard. He has the capability of getting to the rim which puts defenses on their toes.

What interests me the most about him this season is his 3-point shooting. In his freshman season he shot 40 percent from 3, going 2/5 per game. This past season that percentage dropped to 29.8 percent while going 1.5/5.2 per game. This was mainly due to a decrease in catch and shoot efficiency.

Thad Matta is not the only one returning home to Indianapolis this year. The Purdue grad transfers into Butler, close to where he grew up. This past season Hunter had a rocky start of the season for the Boilermakers, but he found himself to be one of the most consistent players by the end of the year. He comes off of making the Big Ten All-Defensive team (and he probably should have made it the year before too).

His point of attack defense will help anchor this perimeter, and his offensive game will be the big question mark going into the year. He had by far his best shooting season of his career, shooting 43.6% from 3. He also got more comfortable getting to the rim. He has the 8th most points in Indiana high school basketball history, and he will look to bring that scoring punch back with him to Indy.

The Butler Bulldogs struggled to shoot the ball last season as they shot 29.7% from 3 as a team. Their best shooter shot 35.3% from 3, but as mentioned above, both Hunter and Harris have the capabilities to knock down some 3s. Ali Ali is another player who should help bump this percentage up as Thad Matta has had a focus on shooting 3s with some of his prior teams.

The Butler Bulldogs come off a disappointing 2021-22 season, but there is plenty of reason to be hopeful. Thad Matta will look to bring the leadership to this team and get both the offense and defense to become better. Eric Hunter is labeled as the make-or-break player, but it could easily be Ali Ali or Manny Bates. Ali Ali provides a much-needed shooter and perimeter creator, while Manny Bates has averaged over 2.5 blocks per game in his 2 seasons at NC State. In addition to that, Jayden Taylor is a name to watch of someone that could really take off this year.

There is not a lack of talent or experience, and Butler will look to make a run in the Big East this year. They will not be a favorite by any means, but don’t be surprised if they start creeping up in the standings come February.