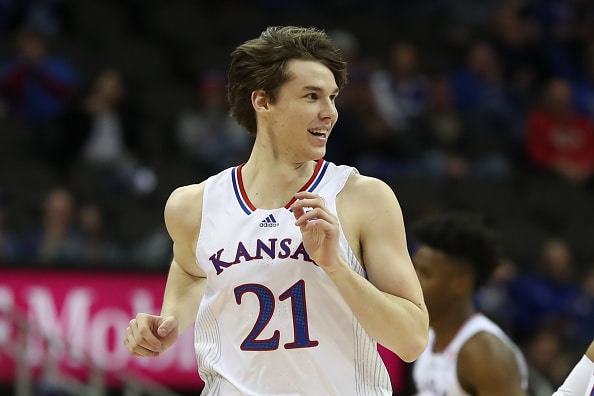 With tipoff approaching on the Kansas basketball season, the starting center position remains in question.

For the past few years, while other positions may have been unknown, the center remained constant between Udoka Azubuike and David McCormack. Now, with McCormack graduated and his backup, Mitch Lightfoot gone as well there is no clear option to take that spot. In this article, we evaluate the options Coach Self can use for that spot as well as the pros and cons for each one.

Pros: Udeh seems like the best option for Kansas Basketball at the starting center spot. Udeh stands at 6’10, 230, which is an ideal center build, and his athleticism will allow him to run the floor at a high rate. Defensively, he can be dominant thanks to his 7’2 wingspan.

Cons: Ernest Udeh has never played a second of college basketball. In a league as talented as the Big 12, it is very difficult to perform at a high level immediately, which could end up happening with Udeh. Also, like Azuibuike and partially McCormack, Udeh’s game is very limited outside of the paint. With the game evolving and outside shooting becoming more and more valuable, Coach Self might opt for a three-level scorer.

Pros: Martin has a great touch from deep, shooting 45% from three in his senior season at Missouri Southern State. He also has good size at 6’9, 230. Another key pro is he’s been around the Kansas Basketball program for a full year now, practicing with the team and facing high-level opponents in his teammates. As a super senior, Martin has several years of college basketball experience that may prove to be beneficial.

Cons: Martin has no Divison 1 basketball experience after deciding to redshirt last season. While he was incredible at the Division II level, the competition is much more difficult, and that can translate early on. Martin is also not much of a defensive threat. A lot of Kansas’ success late in the season that led to their championship run was their defensive adjustments, so having someone like Martin on the floor for long periods may prove to not be beneficial.

Pros: Clemence has the size, and could really stretch the floor. He is at his best outside the paint, as we saw in his limited minutes. If the Jayhawks want to eliminate post-play and really space out, Clemence could be a great option. Also, with a year of experience under his belt, we can really see a big jump from him.

Cons: Defensively, he’s probably the worst option. He isn’t very athletic and could struggle in the post against the Big 12 centers. We also haven’t seen a lot from him, averaging just 5 minutes a game last year.

Pros: If Coach Self wants to run a small defensive lineup, KJ Adams is the guy. Adams could be the best defender on this Jayhawk roster, which is saying a lot. He made some big defensive stops during his freshman year and brings great energy on the court.

Cons: At 6’7, while he has shown that his height doesn’t play a factor at times, it is definitely a disadvantage. The Big 12 doesn’t have a Zach Edey, but it’s naturally very difficult to guard someone 3-4 inches taller than you, especially in the post. Offensively, he also struggles, averaging just one point a game last year and has shown to be limited outside layups and dunks.

Pros: If Coach Self wants to run a small offensive lineup, Jalen Wilson is the guy. Arguably the best player on the roster, many expect the offense to run through him, so giving Jalen wings and guards to work around could be beneficial to him and the roster. He also brings experience, with this being his fourth year and being a focal part of the roster for most of it. This seems like the most likely outcome at least to start the season.

Cons: Like KJ Adams, his 6’8 frame could be an issue, and unlike Adams, defense isn’t his specialty. Teams with good centers like Iowa State and Oklahoma would dominate them early and force Wilson out of the competition.

Pros: Ejiofor has tremendous athleticism and a ton of raw talent. He’s a lot like KJ Adams was coming into his freshman season. During summer scrimmages, he looked very impressive, and while we aren’t watching Kansas basketball practices, it’d be no surprise if he’s impressed.

Cons: There’s a reasonable chance he doesn’t even play this year and redshirts. With so many players in front of him in the rotation, it might be very difficult for him to get minutes, let alone start. Ejiofor has the potential, but in college basketball and a schedule that figures to be challenging for the Jayhawks, throwing a guy like Ejiofor out there might not be in the Jayhawks’ best interest.