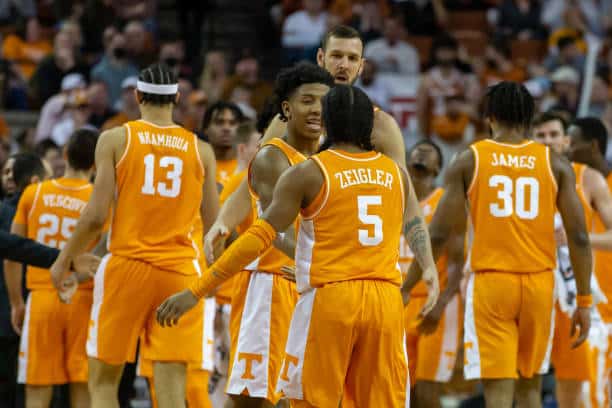 The Tennessee Volunteers have a unique blend of senior leadership and newcomers, with as much talent as any team in the SEC.

CBB Review is once again ranking the top 100 teams heading into the 2022-23 season. Each day we will reveal the next team until we reach the team slotted at number one. Coming in ranked number 11 are the Tennessee Volunteers.

The 2022-23 version of the Tennessee Volunteers is largely based on how four key seniors will gel with some very important newcomers. Transfer Tyreke Key is expected to start at point guard as five-star freshman Julian Phillips is also projected as a starter.

The Vols also have one of the deepest benches in the conference, with 10 players that can legitimately play valuable minutes when called upon. They showed that in a secret scrimmage on Friday night.

A senior leader for the Tennessee Volunteers, there are very few things Vescovi can’t do on the basketball court.

Need points? He’ll lead your team in scoring. Effort on the glass? Vescovi checks that off. Setting others up for buckets? Vescovi’s your guy. Defense in crucial situations? Sign up Vescovi for the job.

But seriously, he’s not just your typical senior. Vescovi goes above and beyond to help Tennessee win games and is also one of the top returning three-point shooters in the entire country. The Vols lost some crucial players in Kennedy Chandler and John Fulkerson, but Vescovi should be able to step up as needed. And on a team with multiple seniors, Vescovi is the one everyone will look to.

A shoulder injury kept Tyreke Key out for all of last season, but based on reports, it doesn’t look like that’s going to be an issue. In the Vols’ big secret scrimmage win over Gonzaga, Key lived up to his name, scoring 26 points to lead all players.

Of course, that’s just one game. Coming off a shoulder injury shouldn’t be taken lightly. But at least one question – how a former mid-major player will adapt to power conference baseball – seems to have been answered based on that game alone.

Key also has some big shoes to fill. Kennedy Chandler was one of the best freshmen in the country last season, so Vols fans will be expecting great point guard play once again. Do I think he’ll fill that role with ease? Yep. But there is some pressure on the Indiana State transfer.

While the Tennessee Volunteers have no shortage of offense, some of their easiest points come from creating turnovers. The Vols return Vescovi (1.7 SPG), Zeigler (1.7 SPG), and James (1.4 SPG), and bring in Key (1.1 SPG). Those four should create havoc against other teams and continue to turn teams over for easy transition buckets.

McDonald’s All-American freshman Julian Phillips also brings a lot of athleticism and should add another layer to an already staunt defense.

In a competitive SEC, the Tennessee Volunteers have an established amount of experience, a five-star freshman, and a mid-major transfer who could be an immediate impact. If all goes well, we should see the Vols make an extended run in March Madness.

Perhaps the best part about Tennessee is a bench that could go very deep. There’s an argument that Zakai Zeigler could not only be the starting point guard for the Volunteers, but would be leading the starting unit on a lot of power conference teams. Uros Plavsic is one of the better backup big men in the country. Tennessee will hardly ever lose the battle down low whether it’s Plavsic or Nkamhoua in the game.

Past those two, it’s still an intriguing bench with a pair of high-level freshmen and two sophomores who could make a jump in production this season.

The Tennessee Volunteers have experienced a lot of winning in football and might see an equal amount in hoops. They’ll put their team to the test in the early slate of games, with Tennessee playing in the Battle 4 Atlantis and other non-conference matchups with Arizona, Maryland, and Colorado. They’ll also play Texas later on in the SEC/Big 12 Challenge.

Tennessee should compete with Kentucky, Arkansas, and Alabama at the top of the top in the SEC. And if all goes well, it could be one of the most successful postseasons in program history.