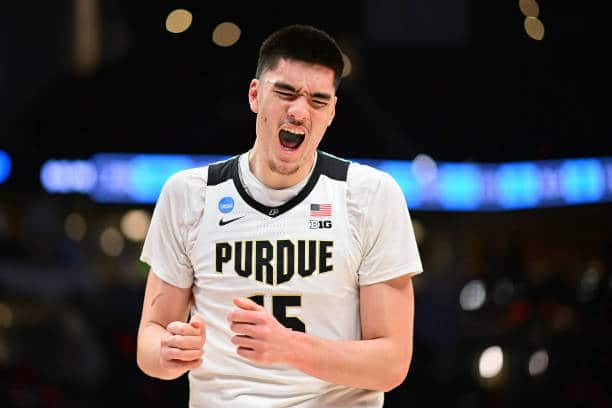 Purdue center Zach Edey was one of the most efficient players in all of college basketball last season. He will look to do that once again while having an increase in minutes.

Purdue had an All-American caliber center on the floor at all times last season with both Trevion Williams and Zach Edey. With Trevion now on the Celtics roster, Edey will assume to play more minutes. One could say that Edey will have an expanded role, but it is difficult to have an expanded role when you took 33% of your team’s shots while on the floor, which was the 20th highest for a player in D1 last season per Kenpom. With all of the offense gone from last season, this will now be Edey’s team. It would not be a surprise to see Edey have the highest usage rate in all of D1.

There are some questions surrounding him though. The first one being how many minutes can Edey truly play. Last season he averaged 19 minutes per game. Now Purdue is hoping it could be anywhere from the 26-30 minute per game mark. With that comes another question, will the increase in minutes affect his efficiency? Naturally, it will slightly. More minutes and wear on the body will lead to slightly more difficult shots and movement. However, will it be a big dip? Maybe he pulls it off and actually increases his already amazing efficiency.

That would not be the biggest surprise. At 7’4″ there are possessions like this one where the defender can’t do anything about it. That’s what makes Edey so good. He has a combination of size, strength, and coordination that nobody else in college basketball has.

He does not come without any faults. On defense, if opposing offense take him away from the basket, it becomes difficult for him to be a positive defender. He has surprising flashes of containing drives, but it becomes really difficult at times for him to defend pick and rolls.

This has to start on the offensive end. He was one of the most efficient players in all of college basketball, and he had one of the highest usage rates (the percent of team’s possessions used by a player) as well. Per Synergy, Edey averaged 1.349 points per possession (PPP) on all of his shots which ranked in the 98th percentile.

It is easy to see why his numbers were so good. Even on possessions like this one where he could not move his defender, he has the footwork and touch to get to his spot. Per Synergy, he averaged 1.049 PPP on all post-ups, ranking in the 97th percentile. He was very good from both blocks and the middle of the paint, but he was most efficient when getting the ball in the middle of the paint. This forced him to move quickly and go over either shoulder. His go-to is the hook over the shoulder or pinning his defender in the post for an easy layup.

Edey was good at getting position early which also helped him a ton in the post. Once he got position, there were very few defenders that had the physical capabilities of recovering. He shot 76% at the rim per cbbanalytics, which was in the 78th percentile for all of D1.

His passing was something I was genuinely surprised by. Maybe it was some of Trevion wearing off on him, but Edey started making a lot of the right reads.

This is the pass that I think of when thinking about his improvement in the area. Thompson passes to Edey on the post and Thompson cuts. His man stays to double Edey. Gillis does a great job setting a flare screen to set it all up. Look at that pass though. He is double teamed, but he still hits the shooter right in stride as he is stepping up on the wing. It becomes WAY more difficult to double him in the post when he can make passes like that.

He had an assist percentage of 16.2% last season which was in the 95th percentile for all centers. Assist percentage is the amount of teammates field goals that a player assisted on while on the floor. He only averaged 1.2 assists per game last season, but I expect that to go up due to him getting even more attention.

Edey “only” averaged 1.2 blocks per game last season which may seem low for someone that is 7’4. However, this is because a lot of times teams did not want to take shots at the rim. His presence was enough to deter a lot of opponents (along with poor perimeter defense at times which allowed a lot of jumpers, but I digress). Edey was also very good defending the post. Players never expected him to have as quick of feet as he has had. Per Synergy, Edey allowed only 0.651 points per possession when defending post ups. I take individual defense data like that with a grain of salt, but it still shows he was elite down low.

In this clip, Kofi gets near the rim but never discards Edey. This allowed Edey to recover for the initial block. Then, he and Gillis walled up, and it is almost impossible to get a pass over him due to his length.

An improved pick and roll defense may be the single most important thing for Edey to improve on. Purdue as a whole was in only the 12th percentile defending pick and rolls. Everyone takes some blame on it from the guards, to the bigs, to helpside taggers. However, teams putting Edey into pick and rolls was the best possible formula they had for success, especially empty side pick and rolls as shown below.

In this one, IU runs an empty side pick and roll. Edey is in “drop” coverage in which he tries to keep both the ball and his man in front of him until Hunter recovers. Edey stays too far up, and TJD is able to get behind him for the easy lob. Teams with any sort of rim runner were able to run this simple action with positive results. Rutgers is another team that comes to mind who ran this against Purdue.

The help side defense could have been better which would make it easier on Edey, but he has to be able to recover better in these scenarios. I am not saying it is easy. It isn’t, and that is exactly why teams ran it against Purdue. Edey will have more reps though which could allow him to time some of this better and defend more shots at the rim.

As I mentioned, the help side defense and guard defense improving will make Edey’s pick and roll coverage better. He has the mobility to do it, but he has lots of pressure put on him when a guard is driving at him, and his man is rolling to the rim. I think this will be the biggest thing to monitor early in the season. If there is improvement, Purdue may be in for a surprisingly good season.

After shooting 71.4% from the free throw line his freshman season, Edey dropped down to 64.9% last year. He had the stretch in the middle of the Big Ten season where he went 16-for-33 from the line over the course of six games. He is going to get to the line a lot. Per Kenpom, only one other player drew more fouls per 40 minutes than Edey did last year. This means that Edey is going to get a ton of free throws. Nobody expects him to be 90% or anything like that, but it will be important for him to get it back up this year.

Ideally, he would be around 75% from the free throw line. Not all centers are capable of doing that, but Edey has really good form and touch at his size. He has a nice arc on his free throw, and he does not let his height really affect how high he shoots it. Edey getting back up to 70-75% from the line adds probably about a point per game for him.

Is he going to shoot some jumpers? Edey has good form, and there are practice videos of him draining 3s. He might be able to step out and take the 15-footer at times. However, would this be beneficial at all for Purdue? I feel like I would rather him take a contested hook shot from 6 feet, but maybe he is confident in the jumper.

The other thing would be could he ever switch onto guards and wings on the perimeter. The initial thought is no because he is 7’4. Nobody would be expecting him to be a world class perimeter defender, but it would be huge if he is able to hold his own on the perimeter every once in a while.

He did it here. Granted, it wasn’t the quickest player, but he was still able to contest the shot. Again, this is not something I am expecting for Edey to develop nor will I think it will be showcased. It is just more food for thought.

To recap, some of the big positives from last season for Zach Edey were his post play, his passing, and his rim protection. I think these are his strong suits, and they are what make him such an insanely good player. On the other side, I would love for him to improve in pick and roll coverage, and for him to get his free throw shooting back up.

Edey has the potential to put up an all-time great season statline this year. His per 40 numbers (stats translated to if he played 40 minutes a game) were insane last season. The efficiency and touch that he has have not been seen too often. There will be no one in the way of his playing time except for him and his body. He is going to get way more attention from the defense, but he is ready for it. I think Edey is in store for another tremendous season, and if things break right, he may be one of the finalists for National Player of the Year.

For my review of Purdue’s last season, and the preview of the upcoming season, click here.

Major Programs Who Could Be On The Outside After Conference Realignment

One thought on “Zach Edey: Purdue Big Man Due For Another Big Year”