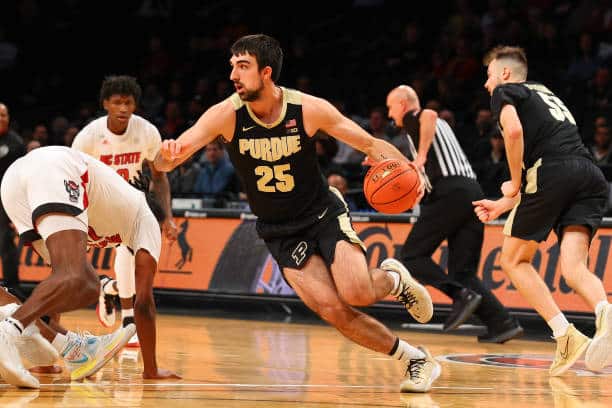 Ethan Morton looks to assume a bigger role this season and provide the Purdue Boilermakers with anything they need.

Ethan Morton is coming off of a solid sophomore campaign, one that the stat line does not do justice. This past season he averaged 2.4 points, 1.4 rebounds, and 1.4 assists per game while playing only 14.8 minutes per game. He did shoot 44.1% from 3 though which was a major improvement. These don’t seem like great numbers, which may cause some to question the following belief I have about him.

Ethan Morton is Purdue’s second most important player next season.

Maybe I’ll be way off because I think there could be a case made for players like Brandon Newman, Mason Gillis, or Trey Kaufman-Renn as well. The numbers do not seem to tell it, but Morton does so much more than what the box score says. He was Purdue’s best defender last year, and he played positions two through four depending on the day. This season could feature him at any of those plus point guards. If Purdue wants any lineup versatility at all, I really believe it starts with Morton. Success is going to be hard to come by for Purdue if he isn’t playing well.

I will get into it more below, but Morton has the capability of providing a lot as a passer, shooter, and defender. I think he slots in once again as Purdue’s most versatile defender, if not their straight-up best defender. With Purdue’s lack of true point guard aside from freshman Braden Smith, Morton’s ball handling and passing abilities can very much take some of the burdens of point guard responsibilities. I’m expecting to see much more Morton at point guard.

Morton had one of the lowest usage percentages on the team, meaning very few possessions ended with him making a play on offense. This led to a lot of stats being lower than what I think truly represents him. He had an assist rate of 14.5% per Kenpom, which means he assisted on 14.5% of all Purdue baskets while on the floor. This is not crazy high, but he was the only player to have a higher assist rate than usage rate, meaning he was really good at setting teammates up in his limited playing time.

I think this pass does a great job showing off Morton’s ability to read the defense, get creative with passing windows, and put passes right where they need to be. The initial play is for Zach Edey to seal down low, but FSU overplays that. This allows Sasha to have a little bit of an opening. Morton recognizes this before the defense can rotate, and he throws it right where Sasha can catch and shoot in stride. I don’t trust many other players to make this pass.

This one more shows off some of the patience Morton has. He gets in the lane and gets stuck. He doesn’t panic though and eventually finds the cutter. Morton has a feel for the game that is tough to teach.

I expect Morton to run a lot of point guard on offense because of his passing abilities. He has good post passing and can create for others. If Purdue can surround him with shooters he becomes even that much more dangerous as a facilitator.

On a poor Purdue defense, Morton may have been one of the few positive takeaways from last season. He had a steal percentage of 2.5% per CBBAnalytics. This means that while on the floor, 2.5% of opponents’ possessions ended with Morton stealing it. This was second on the team, only behind Trevion. Steals and blocks are not the only things defining defense. In the tournament game against Texas, he was key in stopping Marcus Carr. His length at 6’6 allowed him to blow up a lot of sets designed for Carr.

This play was to close out regulation against NC State. Seabron for NC State gets the isolation, and Morton does a great job of staying connected and forcing a tough shot. He has good speed, and at 6’6, he can disrupt a lot of players. Any sort of wing/guard creator, he most likely had a chance at guarding them. With Hunter Jr. gone, it will be even more important for Morton to be that go-to guy on defense.

His lengthy frame allows Morton to have much versatility on the defensive end. It won’t be uncommon to see him guarding point guards, power forwards, and everything in between, all in the same game. A good defensive lineup will start with Morton taking whoever he is called upon to guard.

Morton shot only 28.6% from 3 his freshman year, and that took a huge jump to 44.1% this past season. It was not on high volume, but it was still an insanely good percentage. Per Synergy, he shot 56.3% on uncontested catch and shoot attempts, equating to 1.688 PPP (Points Per Possession). On contested catch and shoot attempts he shot 40%, good for 1.2 PPP. Both are really good numbers, and the uncontested percentage is what gets me most excited.

I think the biggest reason his shooting jumped so much was his confidence. In this clip, Morton was ready to shoot as soon as he caught it. It didn’t matter to him that he was contested and Illinois was on a run. His freshman year that is probably a pass.

He was confident in his shot and knocked it down. It will be super important for him to be able to shoot near the level he did last season. It makes him an offensive threat which makes him more playable with a lot of different lineups.

As great as he was on ball last season, he was beat off-ball at times. Part of this I think can be due to Purdue not having a good defense in general. Part of it just happens when you have as high energy of a player as him. At times he would be caught over rotating or trying to help too much off of the ball. I think he gets a ton of on ball defensive reps this season, but it will be important for him to clean up at times (along with Purdue in general).

In this play, Morton does a great job of tagging Kofi as he rolls. The problem then becomes the closeout. He loses his man some and closes out to where his man used to be, not where he ended up. This allowed the drive and put Purdue in rotation more. It is not a big thing, but it is something that will level up this defense more if he does not have the little slip-ups like this.

This may come down to more of the lack of drives than the quality. As mentioned above, Morton did not have a high usage rate, so he did not take a ton of shots. He did not drive often, but they were not bad when he did. I would just like him to be able to take that step as a creator and generate paint touches. When he can get in the paint and collapse the defense, it will then allow him to utilize his passing skills even more. I think it will be important for him to attain some sort of pick and roll game as well, primarily as a facilitator.

What position is he?

This is what I am most excited about, and why I think he may be Purdue’s second most important player. Morton was recruited as a 6-6 point guard, but he now has shown that he can play one through four. I think he is the key to unlocking a lot of lineups. Need a bigger wing for a bigger lineup? Put Morton at the point. Want to go smaller with 4 wings/shooters around Edey? Put Morton at the 3 or 4 no problem. There are so many things that Purdue can get to if Morton succeeds.

I think it will be important he gets run at point guard even if he is not necessarily guarding the point guard on defense. Jenkins, Newman, and Loyer seem that they are better off of the ball, and honestly, they should be a perfect fit with Morton. They can run actions off the ball and Morton can find them. Him being able to set up the offense, and make good post-entry passes, really allows everyone else to fit into their roles much better. If Braden Smith and Ethan Morton share the floor then there will be two high-level playmakers which can lead to some fun offense.

Does the shooting hold?

As mentioned above, the shooting went way up this season. Will that hold with more shot attempts and fewer stars for defenses to focus on? I think it is reasonable to expect a slight dip for sure. 44% from 3 is pretty tough to replicate. However, I think there is a good probability that it holds based on how confident he shot, and how well he shot while open.

If the shooting holds, it should open up some more driving lanes. If Morton gets more comfortable driving downhill, he becomes sneakily tough to game plan for. He won’t be a super high usage guy still, but he would have the capability of shooting or driving and kicking. That is an important piece in an offense.

Mason Gillis is the glue guy on the team, but Morton makes a super strong case for it. He just makes the plays needed for Purdue, and he will have more opportunities to do so.

I think this play encapsulates Morton well. Both he and Gillis rattle off multiple peel switches to help contain the drive and close out on the shooter. Morton then is the one to actually go get the rebound. He has the motor and feel, and it allows him to just be where he needs to be.

Excited for next season

Maybe I’ll be completely wrong, but I think Morton takes a big jump this year. He has the tools the opportunity to thrive given the possible role as a facilitator and lockdown defender. He won’t be a top scorer, but he will do everything needed of him. I think he will be one of the better defenders in the Big Ten, and he definitely is the most underrated passer in the Big Ten right now. I’m extremely excited to see his development as he has a bigger role this year.

Fletcher Loyer Is More Than A Shooter