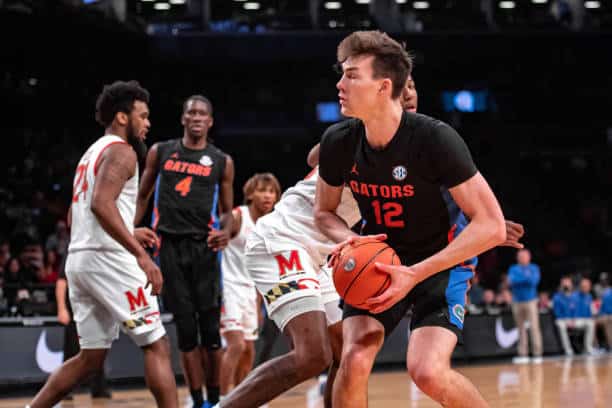 The Phil Knight Invitational and Phil Knight Legacy tournaments feature a handful of some of the best programs in college basketball.

Two early season basketball tournaments – both named after Nike co-founder Phil Knight – will take over the college basketball slate over Thanksgiving weekend. And as usual, they feature some must-watch basketball games.

Each of these eight-team tournaments has a first-round matchup like this. It pits a title-favorite team against one of the Division I squads from Portland, Oregon. Like the Maui Tournament, the purpose is to include the home team. However, as is the case with Chaminade, that won’t result in an entertaining game. Of course, Gonzaga will create an awesome semifinal matchup with whoever they face, but in the first round, this will be as big a blowout as any.

The tie goes to the runner here. While I have UNC as the preseason number one overall team, I have this as more watchable because they’re my title favorites. It’ll still be as big a blowout – if not bigger – than Gonzaga vs Portland State. But get through this and the Tar Heels have some really cool potential games waiting for them.

The Beavers won three (3) games in 2021-22 and most of their top players ventured off elsewhere. Duke also lost a pretty big name as Mike Krzyzewski stepped aside after the season and Jon Scheyer takes over as the head coach of the Blue Devils. That’ll be the storyline all season for Duke, and there will be plenty of bigger games than Oregon State. At least it’s a game between two power-six opponents!

Now we’re getting somewhere! For two tournaments filled with Big East teams, this is actually the least of them. Villanova also heads into year one of a new coach after Jay Wright surprised everyone and called it quits after the season. Now, it’ll be Kyle Neptune trying to lead a Collin Gillespie-less Wildcats team. They’ll draw Iowa State, who also lost their star, Izaiah Brockington. Both teams will still be in play for NCAA Tournament bids, but Villanova has the upper hand on paper.

Purdue may have lost Jaden Ivey and Trevion Williams, but they still have Zach Edey, who is in position for a monster year. The Boilermakers have also been one of the most consistent teams in the Big Ten this past decade. Meanwhile, West Virginia has a sneaky good roster that’s flying under the radar after a 16-17 record last season. Bob Huggins can still coach and got a helluva transfer class to try and back that up. Tre Mitchell, Erik Stevenson, and Joe Toussaint start a new era of West Virginia basketball. Both teams will be searching to prove themselves as the season goes on, but it could very well turn out to be a game between two NCAA Tournament teams.

I’m a huge fan of Florida this season, as the Gators return Colin Castleton and Myreon Jones and bring in St. Bonaventure star Kyle Lofton. The transfer portal can always make you fall victim to overrating teams, but Lofton is a proven scorer and winner who should have no problem adjusting to the SEC. Meanwhile, Xavier is a dark horse to win the Big East. Everyone is hopping on Creighton’s bandwagon – and for good reason. But the Musketeers return Jack Nunge, Colby Jones, Zach Freemantle, Adam Kunkel, and a few other role players from a year ago. Altogether, they bring back nearly 60 points per game from a team that won 23 games last season. And, Sean Miller returns as coach. I call this game the “sleeper game” because while neither team might headline the  Phil Knight Legacy, they both have what it takes to make deep runs in March.

Where do you start with this one? I’ll begin with the coaching matchup of Tom Izzo and Nate Oats. That alone puts this game in the top three. But even more interesting is how the tables have turned. This year, Michigan State is searching for some answers, with departures once again leaving them outside of the national talk to begin the season. But Alabama is a legit Final Four contender. The Crimson Tide is led by Jahvon Quinerly, Charles Bediako, and Noah Gurley. They brought in Mark Sears from Ohio. And freshman Noah Clowney is one of the top gets in his class. Can the Spartans prove themselves or will Alabama continue to turn into a… basketball program? It’s enticing!

One of the evenest matchups in the Phil Knight Invitational, this game also features two potential top 25 teams in UConn and Oregon. On top of that, both squads have very rich and unique histories, making it that much more compelling of a matchup. It isn’t every day you get to watch UConn and Oregon – two programs on opposite sides of the country – battle in a basketball game. But when you do, it’s a treat. This year, the Huskies are led by one of the top big men in the country in Adama Sanogo. Meanwhile, Oregon returns Will Richardson and Quincy Guerrier and welcomes in a very compelling transfer class. This game has all the makings of a classic.