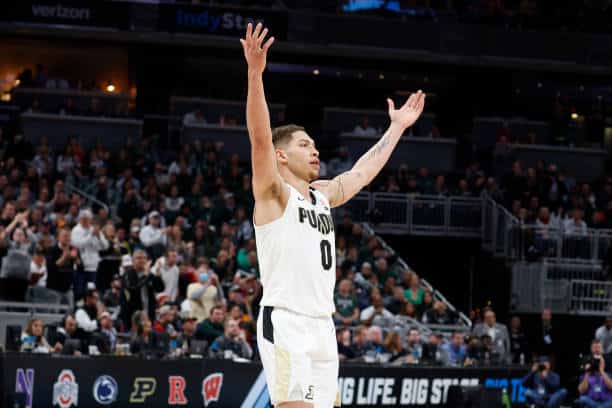 Mason Gillis returns for his junior year at Purdue, looking to bring the same intensity, efficiency, and attitude as before.

Mason Gillis had one of the more efficient years in all of college basketball.

This tweet was from about halfway through the season, and it shows just how on fire Gillis was from 3. Yes, it was not the largest volume, but Mason Gillis is not a high-volume shooter. He makes the plays that are needed, nothing more and nothing less. He ended up cooling down a little bit later in the season, but he was still one of the better three-point shooters on Purdue last season.

Gillis’ shooting was something more of an added bonus, although the spacing it provides this year will be necessary to pair with Edey. His overall energy and hustle provided so many extra possessions for Purdue. If there was a loose ball or a rebound opportunity, you can bet that Gillis was somewhere nearby.

That’s what he provides, and that is who he is as a player. He’s not going to always be recognized as much as he should, and his presence on the box score may not always show the full truth, but he will find ways to impact the game in a positive manner.

This next season he may have an expanded role of sorts, mainly due to his veteran leadership. He will be one of the more experienced Purdue players, and Painter will rely on him to be the rock of the Purdue team. I expect a lot of the same from last year in terms of his usage, but it will be interesting to see if he is featured in different ways within the offense.

When I was going through clips, preparing for this article, it shocked me how many times there was a mention or clip of Gillis keeping a ball alive, being in the spot for an offensive rebound, or diving on the floor. He created so many extra possessions for a Purdue offense that was one of the best in the country.

I think this play exemplifies the strength and hustle Gillis has more than any other play in the entire season. Maryland wass down 1 with 8 seconds left and the ball under their basket. This was a gritty game by Purdue, one that they were no where near their best at.

There is a drive baseline that is cut off by Gillis and Trevion. Shot goes up and is blocked by Gillis, and the ball then hits the floor. This is with about 4 seconds left in a 1 point game. Mason Gillis was the only player from either team to dive on the floor. Nobody wanted to win more in that moment then him.

Or take this play. Watch him the whole time. He doesn’t do anything special, but he just puts himself in a spot to succeed (and I swear he has a magnet for the ball on offensive rebounds or something). This one was not even insane hustle, it was just him knowing where he needed to be to help Purdue win.

What I think also allows his energy and toughness to shine is his IQ. He has an understanding and feel for the game that allows his skills to be broadcast brightly. Watching him in any given possession will entail multiple cuts, replaces, screens, and movement. He’s always moving and cutting where he needs to be to end up with the best possible shot or play for the team.

After a solid freshman season in which he shot 35.2 percent from 3, Gillis turned into a flamethrower for much of last season. He was burning nets on his way to shooting 41.4% from 3 which is as low as it is because of some late-season struggles from 3. He was over 50% for a large portion of the year.

One type of action that allowed Gillis to get open 3s was his replacing the driver. If he was in or near the paint, he would often times rotate to where the person with the ball just drove from. This would put his man in a position to help, allowing Gillis to be open on the perimeter.

Here Ivey drives left and Gillis replaces at the top. His man stays in the paint to help on the drive, leaving him wide open for 3. Look for him to go to this action a lot this upcoming year.

Over Helping on Defense

This topic is tough because it explains what makes Gillis so important to his team. Gillis found himself in the crosshairs of shooters because he would over-help on drives. However, the energy on defense such as helping is what Purdue badly needed from him. It’s a tight line to walk, but he got burned enough against shooters that it will be something that hopefully gets improved on next year.

In this play, Mason Gillis starts on the weak side wing, and the ball handler drives his way. Once the ball handler got near the paint, Gillis dug at the ball. No issue there, as he was still close to his man. The issue is when he committed to almost doubling down low. This left his man wide open, and Gillis was near the basket so he could not recover in time. Maybe Purdue could have rotated, but the extra time spent in the paint allowed the jumper.

Another example of where Mason Gillis just over-committing slightly, especially with plenty of help defense behind, allows his man to get a look off. The aggressiveness is great, but there is a time and place for it. Here, there is plenty of help behind, so there is no need for him to commit as hard as he did. Most times he would get into trouble when overhelping while the defense was in a good spot already.

NOTE: There is without a doubt a chance some of these scenarios are due to game planning. That is what makes judging defense difficult at times without truly knowing the scouting report. That very well could have been the plan by Purdue, and Gillis was just doing what he was told to.

It feels weird to say this after ranting about how good his IQ and hustle are, but there were some consistency concerns, specifically with the shooting and defense. On defense, I feel comfortable calling Gillis one of Purdue’s better defenders. His lapses in general were not on a massive scale, but they were big enough to cause problems a la over helping to lead to the open threes. With another year of experience under his belt, Purdue will need him to be there game in and game out.

On the shooting front, from November 9th to January 23rd, Gillis shot 52.6% from 3. This was right about the halfway point of the season. The rest of the year he shot 32.7% from downtown. A 20% difference between two different months. Some of this maybe could be put on the grueling conference schedule that is the Big Ten. Maybe some tired legs. But a 20% difference is a lot. I think he returns as another 40% 3-point shooter. There will be issues if the 32.7% is closer to what he actually is as a shooter, and I would not be shocked if Purdue cuts some of his minutes if that happens.

Per Synergy, Gillis took three pull-up jumpers, seven runners, and one hook shot all of last season. Basically, everything was catch-and-shoot, cuts, or offensive put-backs. It makes sense because he really excels in these areas and of course Painter is going to want to put his players in spots that help them succeed. Gillis was in the 83rd percentile on spot-ups, 91st percentile on cuts, and 96th percentile when running in transition. All super efficient numbers.

Can he add a pull-up jumper or little in-between game to keep defenses on their toes? Better yet, can he add that at a high enough clip that it makes sense for him to actually mix in those jumpers? If he shoots the same percentage from 3 and the mid-range then he should just keep taking the 3s since it is more points per possession.

If he can add some sort of self-creation, it only takes that much pressure off his counterparts such as Edey and Newman. It makes him that much more of an offensive threat which will drive opposing 4s crazy.

This one relates more to how Painter plays him at Purdue. Gillis is a perfect college 4, so I expect most of his minutes to come at that position. However, there are questions at the wings. Will Gillis at times slide to the 3 with maybe Furst at the 4 and Edey at the 5? It does not feel like it to me since I would worry a ton about perimeter creation. However, it would not be the most surprising thing to see this tried out.

On the other end, would Purdue ever go super small with Gillis at the “5”? I put it in quotes because he would not be the biggest player on the floor. It would probably looks something like

In which case Gillis or TKR would interchange at the five. Both have perimeter capabilities and it would be fun to watch.

With Edey projected to take on as many minutes as he can handle, and Furst going to take any minutes Edey can’t, I don’t expect to see any Gillis at the five bar, bar special circumstances. It’d be fun though.

Gillis knows who he is as a player. He is not going to stray from that, and he is always going to prioritize winning plays. He is one of the ultimate glue guys in all of basketball, and I can say with confidence that every team would want a player like him.

It will be interesting to see how his minutes get distributed with multiple players that can play at the 4. At the end of the day though, it will be Gillis’ spot to lose. He puts forward too much effort and hustle for him to be benched without a chance.

I’m super excited to watch him this year, and I think he will step it up even more in his role. He will probably once again lead the team in the Unofficial-I’m-Just-Guessing-Stats of loose balls dove for, offensive rebounds tapped for others to grab, and not having his impact show up in the box score, although I know the Purdue staff will be keeping track of some of it. That’s why he’s the king of winning plays.