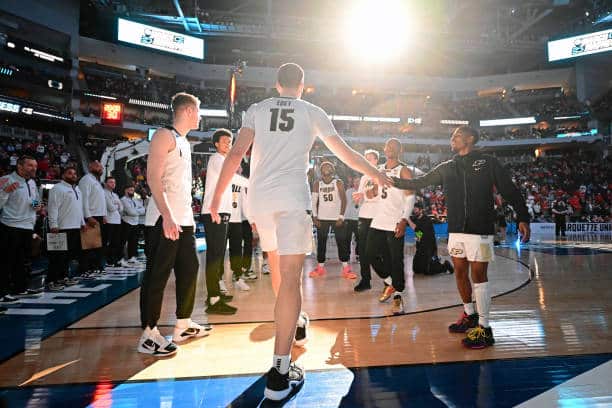 The Purdue Boilermakers have to retool after losing many key pieces from a good team last year. However, they have one very big player that will be key.

CBB Review is once again ranking the top 100 teams heading into the 2022-23 season. Each day we will reveal the next team until we reach the team slotted at number one. Coming in ranked number 27 are the Purdue Boilermakers.

Purdue had really high expectations last season behind the likes of Jaden Ivey, Trevion Williams, Zach Edey, and others. They were able to reach #1 in the AP Polls for the first time in school history, and they had one of the most efficient offenses in all of college basketball.

However, they were not able to get a share of the Big Ten title, losing 4 of their 6 games off of buzzer beaters. They were also bounced by St. Peters in the Sweet Sixteen, so the season will often be looked at as not reaching expectations.

Now with a lot of the players gone, Purdue is going to be looking a lot different. One player that will remain the same is Zach Edey, the 7’4 big man who will have one of the highest usage rates in all of college basketball.

Zach Edey was a monster for Purdue. He averaged 14.4 points and 7.7 rebounds on 64.8% shooting… in only 19 minutes per game. He traded off with Trevion Williams who was dominant in his own right. With the center position open, Edey is going to get as many minutes as he can handle.

And that will be the main question. How many minutes will Edey be able to play? If he could get to the 25-30 minutes per game, he is going to put up some gaudy numbers. He will have a realistic chance at Big Ten Player of the Year and an All-American selection.

At 7’4, no one can guard him one on one down low consistently. Teams have to either double or dig down. He has really good footwork that makes it nearly impossible to stop once he gets position down low. He also has shown he can take a power dribble or two if needed.

The really interesting part of his game was his improvement in passing last season. There were multiple occasions that he made high level passes out of the post, and he will have to do that again this year.

Defense will be the big question surrounding him. He will play drop coverage against pick and roll, but it is tough for him to defend if the guards aren’t getting through. He does a pretty good job protecting the rim, but it can be difficult for him to defend in space.

On offense, it is going to be the Zach Edey show. He is going to get as many touches as he wants, and there is a chance he leads the country in usage percent.

For more of an in depth break down of Edey, click here.

Ethan Morton will be a do it all type player for Purdue. At 6-7, he has the capabilities of defending 1-4 dependent on matchup. If there is a star wing, Morton is going to get the assignment.

Morton may not end up as Purdue’s second “best” player. I think he is in the mix with 4-5 other players for that title. However, I do think he will be Purdue’s second most important player because of his versatility.

If the Boilermakers want to go big, they can go with Morton at point guard, the position he was recruited for. If they want to go smaller, he can play the 4 and everything in between.

The front court is kind of stacked for this team, with 4 players that could be legitimate starters. I think that is what makes Morton so important. He will be adaptable and do what is needed.

On top of that, he is skilled in his own right. He is a very good passer, and he has shown he can make excellent reads. He also shot 44.1 percent from 3 last season, and he averaged 1.688 points per possession on open catch and shoot 3s, one of the top efficiencies in the country.

Last year Purdue was one of the top shooting teams in the country, while playing centers that could not really stretch the floor. They lost one of their top marksmen in Sasha Stefanovic, but everyone besides Edey can shoot the 3 (and there are even clips of Edey draining 3s in practice but I doubt we see that often in game). If Purdue wants to provide space to Edey, they are going to have to make 3s once again.

The Purdue Boilermakers will have a solid non conference schedule featuring matchups against Marquette, Florida State, and being apart of the Phil Knight Legacy Tournament.

They will once again have a tough Big Ten schedule as everyone in the Big Ten does. It is projected to be a slightly down year for the Big Ten, which makes a title attainable for multiple teams.

This is also a fairly young team, as 2 red shirts and 2 true freshman are expected to be in the rotation. There will be only one player that graduates this season and that is grad transfer David Jenkins Jr.

The other thing with Purdue is point guard. They eventually got Jenkins Jr in the portal, but he projects more as an off guard. I have extremely high hopes for freshman Braden Smith. He is a fiery competitor that I think has potential to be great from the start. Freshman Fletcher Loyer also may handle a little bit of point guard responsibilities as he is great at creating his own shot. He projects more to be off ball though.

Trey Kaufman-Renn is one of the highest ranked recruits in Purdue history. After red shirting last year, he may be the one that could end up pushing the ceiling of this team. He can shoot or score inside, and he can be very versatile.

Purdue is going to have a lot of questions going into the season, but Matt Painter has proven he can get the most out of teams like this which will always make the Boilermakers relevant.