Trey Kaufman-Renn: TKRs Time For A Big Impact Is Now 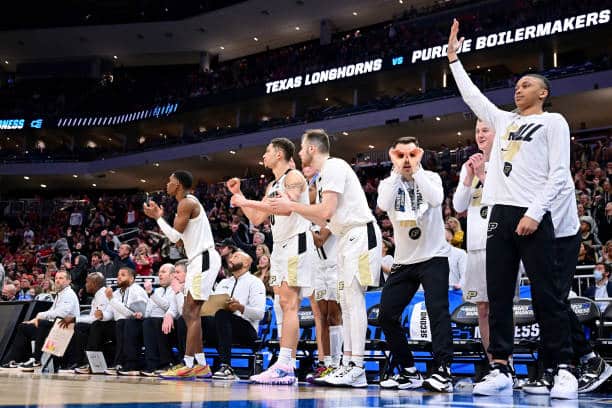 Trey Kaufman-Renn looks to step into the role he was recruited for after coming off of redshirting his freshman year.

Last October it was up in the air who would be the starting power forward for the first few games. With Mason Gillis suspended, the next logical choice seemed to be the #44 overall recruit per 247sports, Trey Kaufman-Renn. Then near opening night, it was announced that TKR would be redshirting his freshman season.

Per DJ Fezler of si.com, issues of a super deep back court and difficulties picking up on the defense is what ultimately made the mutual decision to red shirt TKR. With more room cleared this year, TKR will begin to bear the fruit of that decision.

Where Trey Kaufman-Renn plays on the court will be interesting. In high school, he was definitely a power forward or center, but he has showcased perimeter skills. At 6-9, he is a very tall wing. He does not have the quickest feet, but he is really smart and understands how to use angles to his advantage. In high school he showed that he could take people off the dribble.

Now there are not two All-American quality centers on the roster, but the front court is still loaded. Zach Edey is steadfast at the starting center, and sophomore Caleb Furst projects to be the backup center. It would make sense for Gillis to retain his starting spot at the 4, and then TKR would be the backup. I don’t see many minutes getting taken from Edey or Gillis, which makes it tough to play Furst and TKR a lot of minutes at the 4 and 5. This is also assuming 7’2 freshman Will Berg red shirts.

I personally don’t think that he plays the 5 at all. I think he starts at the backup 4, but where he could be very interesting at is at the 3. He would be a tall 3, but he has the potential to provide wing slashing and creation to a core that is somewhat lackluster there. We’ll get more into it in a bit.

At 6-9, by no means is Trey Kaufman-Renn a guard. However, he has shown he has ball-handling chops that allow him to get where he needs to go. It will be interesting to see how it fares against Big Ten defenders, but often times he will have a slower player on him when playing power forward.

Here TKR gets the loose ball and goes on a one-man fast break to score. Granted, it was against high school opponents, but I think it is still important. The confidence and ability to do this at his size while in high school is a promising sign. With a full year of development at Purdue, I expect this to only get better. He also has a really good feel around the rim. Many times he would have multiple defenders on him, but he would still get the shot off from where it needed to be.

This play may seem simple but it gets me excited for his role at Purdue. This was from the team scrimmage last season. Sasha makes the touch pass to Trey Kaufman-Renn. Furst closes out to his side, so Kaufman-Renn maintains the advantage by driving near the baseline. No, he does not score, but he does what he needs to. The drive caused to defense to stay in rotation. He then hit Ivey who was able to attack this rotated defense and do Ivey things to the rim.

I also like his passing in this possession on the move. He reads the weakside defender (Morton) well and hits Ivey where he needs to be.

That brings me to my next thing I like, his passing. He averaged 3.6 assists per game his senior year of high school. Yes, he was getting lots of double teams and attention, but he still had to make the reads and passes. His high basketball IQ allows him to patiently read the floor until the ball goes where it needs to.

Here TKR gets the ball in the corner off of an inbounds play. The opponent immediately sends a double. You can see TKR set it up and make the pass as soon as he recognizes the defense left him under the basket (also a very good read by 24 to just stay there). I think this is a translatable skill because of how easily it seems he can read the floor, and the velocity he can put on some of the passes he had made.

This may be what causes TKR to get more minutes or play only in a reserve role. I think at some point he ends up having to play the 3 assuming his offense is what I think it may be. He feels like he may end up being too good to only play 15ish minutes a game, but that is probably what he would be at if he only backed up Gillis at the 4.

When at the 4, it will be interesting to see whether TKR can have the strength to matchup. He is on the leaner side, but he has had a full season of development at Purdue with the red shirt, so there is a good chance he has put on some weight. I think this will be his best position to play, but as mentioned above, I think he will be too good on offense to play only at the 4.

I am worried about his foot speed when (if) he plays at the 3. At 6-9, he has length that I think could disrupt a lot of slashers’ ability to drive. However, I am worried about him getting beat off the dribble and forcing Purdue into rotation. If TKR is at the 3 and Edey is in, how does TKR’s screen navigation look? With Edey already being limited in pick and roll coverage, it makes it that much more imperative for Trey Kaufman-Renn to be able to navigate the screens.

The other aspect is closing out. If he is at the 3, often times he will be the low man on the weakside defense. He will be tasked with helping the lane but also recovering to the wing. When this happens, will he have enough in him to close out and stay in front? I think in general the answer will be yes, but he may really struggles with some quicker 3s and 4s.

The defense may determine how many minutes he plays, but the shooting may be what determines how good of an overall player he is. Per Maxpreps, he shot 34% from 3 in high school. However, it gets more interesting when breaking down his 3-point shooting percentages by year.

As shown, he was never a super high-volume 3-point shooter. He also never had to be. He shot really well his first 3 seasons, and then he struggled his senior year. What shooting will show up for Purdue?

If his shot gets going, he has the potential to be the second leading scorer on the team. It would force teams to have to close out, and then he can start attacking rotated defenses as in one of the clips shown above.

Trey Kaufman-Renn does not have a super quick shot, but he has really good form. There is very little wasted movement, and he appears to have very repeatable mechanics (this of course coming from someone who is by no means a shot doctor).

Here is another angle of his jumper. This play specifically will be where he needs to shoot. I don’t expect him to be a pull up shooter, but he needs to be able to knock down some of these open kickouts.

Pick and Roll / Self Creation

This may be more of a sophomore or junior season development, especially the pick and rolls. Still, I think it would be huge for Trey Kaufman-Renn to add some sort of self-creation. He feels like he has the ability, it will come down more to whether or not he is able to show it. In an offense that will feature a lot of Edey post-ups, there may not be space (or a need) for Kaufman-Renn drives.

I mentioned above how I think Kaufman-Renn fits in great as a secondary creator, someone who creates while the defense is in rotation (like the scrimmage clip earlier in the article). If he adds the primary creation to tilt the defense, things become a LOT more interesting for him and Purdue both. Purdue lacks that primary creation as of now, but TKR may be able to slide in and fill in some of it.

Trey Kaufman-Renn is a really interesting player. After red shirting, he will have had plenty of time to become familiar with both the offense and the defense. There is a needed role on the wing that he has the potential to fill, but he appears to slot more as the backup 4 to start. I think his ability or inability to play the 3 may go a long way in determining the success of this team.

He comes in on day 1 as a scorer. He has really good touch around the rim and can defeat a broken defense. He also has shown success in the post, but I don’t know how much of that part of his game will be seen with Edey there. TKR’s ability to pass and understand the game really sets him apart. He understands where the ball should go, and he has shown in high school that he is willing to create for others.

The defense needs to improve for sure. It was the main reason he red-shirted, and it will make or break his playing time this season. It will be important for him to at least not be a total negative defender if he ever ends up at the 3.

Overall I am really excited to watch Trey Kaufman-Renn play this season. He has the capability of being the 2nd or 3rd leading scorer on this team from day one. With a year of training, I think he is now ready to show why he was ranked so highly. He may have a somewhat slow start due to just adjusting to D1 play. I would not be surprised at all however if he starts for the team by Big Ten play or sooner.

One thought on “Trey Kaufman-Renn: TKRs Time For A Big Impact Is Now”