Brandon Newman: A Purdue Boilermaker On A Mission 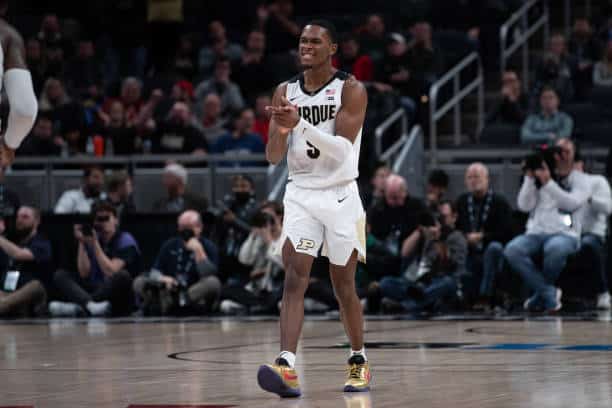 Brandon Newman looks to bounce back after what was a rocky sophomore campaign. With more playing time available, Purdue will look to lean on him to score from the perimeter.

Needless to say, Brandon Newman did not have his best season for the Boilers in 2021-22. There is hope after a very solid overseas performance (the dunk highlight shown above is from it) for him this upcoming season. After a promising freshman season in which he started 23 games, and averaged 8 points and 3.5 rebounds on 37.9% shooting from 3, those numbers fell just as his minutes did. With the emergence of superstar Jaden Ivey, Newman was forced to take more of a back seat role. Maybe there was an issue with him adjusting to the bench. Maybe it was just an offseason. At this point, none of that matters anymore.

Newman dropped to only averaging 4.6 points per game while shooting 32.1 percent from 3. He averaged basically half the minutes as he did his freshman season. The efficiency decreased, but it is kind of interesting that almost all of his stats decreased in half. He went from 23.6 minutes per game to 12.6. His points from 8.0 to 4.6, rebounds from 3.5 to 1.9, assists from 0.8 to 0.4, and turnovers from 1.6 to 0.6 per game. Can an increase in minutes get those numbers back up? Purdue sure is hoping so.

Newman is a really interesting player, as I think some of his strengths also incorporate some of his weaknesses that I will go over below.

Newman was known for his shooting and scoring abilities coming into Purdue, and he showed why in his freshman season. In his freshman season, Newman averaged 1.513 points per possession (PPP) on open catch and shoot attempts per synergy. That equates to 51.3% from 3 on about 2 attempts per game. This ranked him in the 95th percentile in all of D1 that year. He was also formidable when contested, averaging 0.881 PPP which was the 68th percentile (shot selection will be talked about soon).

Even last season during his “shooting slump”, Newman still knocked down some of the open ones. He averaged 1.28 PPP on open catch and shoot attempts, good for the 75th percentile.

This was from the recent USA overseas team that both he and Morton were a part of. This does not look like a shot from a man that lacks confidence. He gets set, looks the defender in the eye, and then fires. I know it’s only one offseason clip, but he played really well in these tournaments. We all know his form is pure, so there is not much to comment on that. It was just good to see him confident and firing away.

I lumped scoring upside into this category because of plays like this. To be honest, this is probably a bad shot and could be featured when I talk about shot selection. But it also shows a skill that no one else on next year’s team has proven: perimeter creation. The only other guy on the team that has shown he has the capability to create for himself off the dribble was Jenkins at his previous schools.

Newman has some of that pure scorer in him. I personally love following the analytics, but I also recognize the importance of tough shot-making like this which can then cause the offense to flow more in general. In a market where efficient pull-up shooting is hard to come by, Newman has ranked in the 74th and 85th percentile on pull-up jumpers the past two seasons, per Synergy. It was not the highest volume, but they were still efficient. With defenses most likely to throw multiple bodies at Edey, it will be important for someone to be able to attack closeouts like this on the perimeter.

Newman is a very gifted athlete, and he is able to use those abilities to do well on the ball. In his freshman season he averaged 0.8 steals and 0.4 blocks per game. They aren’t crazy numbers, but they highlight that he has defensive capabilities in him.

Watch Newman fight through a handoff followed by another screen (aka Miami action). He gets through both and recovers. He then does a nice job helping down and getting back out to the perimeter to defend his man in isolation. He forces him to help where the turnover is forced by Gillis. At 6’5, Newman is able to have a good length to defend the perimeter, while also moving his feet pretty well.

Newman here is perfect as the low man. He stunts over to prevent the post-entry pass. He then has a textbook closeout that allows him to prevent a jump shot, but also not let his man blow by him. Newman finishes it off by staying in front of the drive which allows Ivey to stunt down for the steal. If everything breaks right on the defensive end for Newman, I think he would be a sneaky dark horse Big Ten all defense.

It doesn’t take too much Newman film from last season to recognize he took some uber-contested shots. Before taking a look at a little bit of film, let’s dig into some numbers real quick.

All of these numbers will be per Synergy.

In his freshman season, he took 98 catch-and-shoot attempts. 59 were contested and 39 were uncontested. He shot 0.881 points per possession (PPP) on contested catch and shoot attempts which equates to 30.5% from 3. This was still in the 68th percentile of all D1, so not terrible He shot 1.513 PPP on open catch and shoot which is 51.3% from 3. This was in the 95th percentile.

His pull-up shooting actually increased from 0.769 PPP to 1.0 PPP this past season.

The moral of the story, Newman makes good shots where he can get set, and is likely to miss bad shots. It seems obvious, but I do not think there are too many players that it is more true than with him. Now, I recognize that this past season he forced some shots in his limited minutes. Maybe this season he knows he has a larger role, so he won’t feel the need to force.

An off-balance, contested 3, with 24 seconds on the shot clock. A bad shot, but one Newman may have been felt he needed to get up.

An off-balance, contested 3, with 15 left on the shot clock. Both of these are not good shots, and they had very bad results.

Compare both of those clips with this one. In this one, he passes up the initial contested shot to get to an in rhythm pull up and it is money. This happened in the Big Ten Tourney which gives me hope that this will be more of the decision-making seen this next season.

In general, shot selection is a double-edged sword with Newman. On one hand, he needs to weed out some of those really forced attempts. On the other hand, as mentioned above, Purdue is going to need the perimeter attack. This will undoubtedly result in some questionable shots, but Purdue will need some to fall to improve offensive flow.

This has really caused me to go back and forth on this topic, I even just did it in that last paragraph. I think to try and generalize it, I think Newman should be not forcing shots but letting the offense flow. If that results in open catch-and-shoot attempts or in rhythm pull-ups, those are major wins for the offense. When it turns into getting shots up just to shoot, that is when bad things happen.

I have already stated that I think Newman is a great point-of-attack (on-ball) defender. Off ball, he got beat quite a few times, although that was not the most uncommon thing last year for Purdue. There were often times that he would be caught ball-watching or not rotating, but I am willing to put a little bit of that on his sporadic minutes in the rotation.

Newman here gets caught on the weakside in no man’s land. He loses his man cutting and is late rotating as the low man. A couple of quick steps early in the action may have prevented the bucket given the fact he still almost gets the block. And that is what is so intriguing and frustrating from last season. Newman more than has the tools needed to be successful. It will be interesting to watch if a lot of these mental mistakes go away with another offseason under his belt.

Self Creator and Rim Attacker

Getting to the rim is something Newman has not done a lot of, mainly because that was never his role. I don’t imagine him filling the Jaden Ivey role because I think he really is going to be a shooter. Rim pressure and paint touches will be needed though, and once again, no one on the team has really proven they can generate either as of yet. Some of this issue is solved by having Edey being as dominant as it is. If guards can get some paint touches though, this should create some easy dump-offs to Edey.

That is where Newman comes in. I think he has the potential to be able to get downhill off the dribble, but he has really lacked it so far. He took 51 shots at the rim his freshman season (out of 201 total shots) for a 1.0 PPP. This past season he took five (5) shots at the rim for 1.6 PPP. How high will this number get this season?

Teams are going to be flying out to prevent Newman from shooting I assume. If Newman can counter by attacking closeouts then that opens up a whole new dynamic to the offense. It will also be interesting to monitor him in pick and rolls. Purdue does not run many, and I expect there to be fewer than last season, but will he run any pick and rolls as the ball handler? It would add another wrinkle, but I do not expect to see it often.

In the modern era of transfers, Newman decided to stick it out at Purdue and make it work. Coming off of a rough season like his, that was uncertain. With him staying though, there will be ample opportunity to get minutes. I assume he will be the starting shooting guard from day 1 and one of the primary perimeter creators and shooters.

Purdue is pulling for him harder than probably anyone else. I’d say that Purdue twitter was happiest last season during the Penn State game in the Big Ten Tourney when Newman came off the bench and went off. He has full support, and everyone is ready to see him shine.

He will be needed by Purdue too. Newman has the ability to guard 1-3, and if his off-ball improves, he may become one of the better defenders in the Big Ten. On offense, Purdue needs him to shoot but not force. If he lets the offense come to him, there is no reason he won’t be a double-digit scorer for Purdue. Maybe it is just me being an optimist, but I think it is very realistic for Newman to average 12-13 points per game while being a very good defender.

I’m super excited to watch Newman this year. It is time for him to bounce back, and I think he will be more than ready. He performed very well in the overseas tourney he and Morton played in, leading the team in scoring average over the course of the game. Now it will be time for him to bring that confidence back to West Lafayette.

2 thoughts on “Brandon Newman: A Purdue Boilermaker On A Mission”