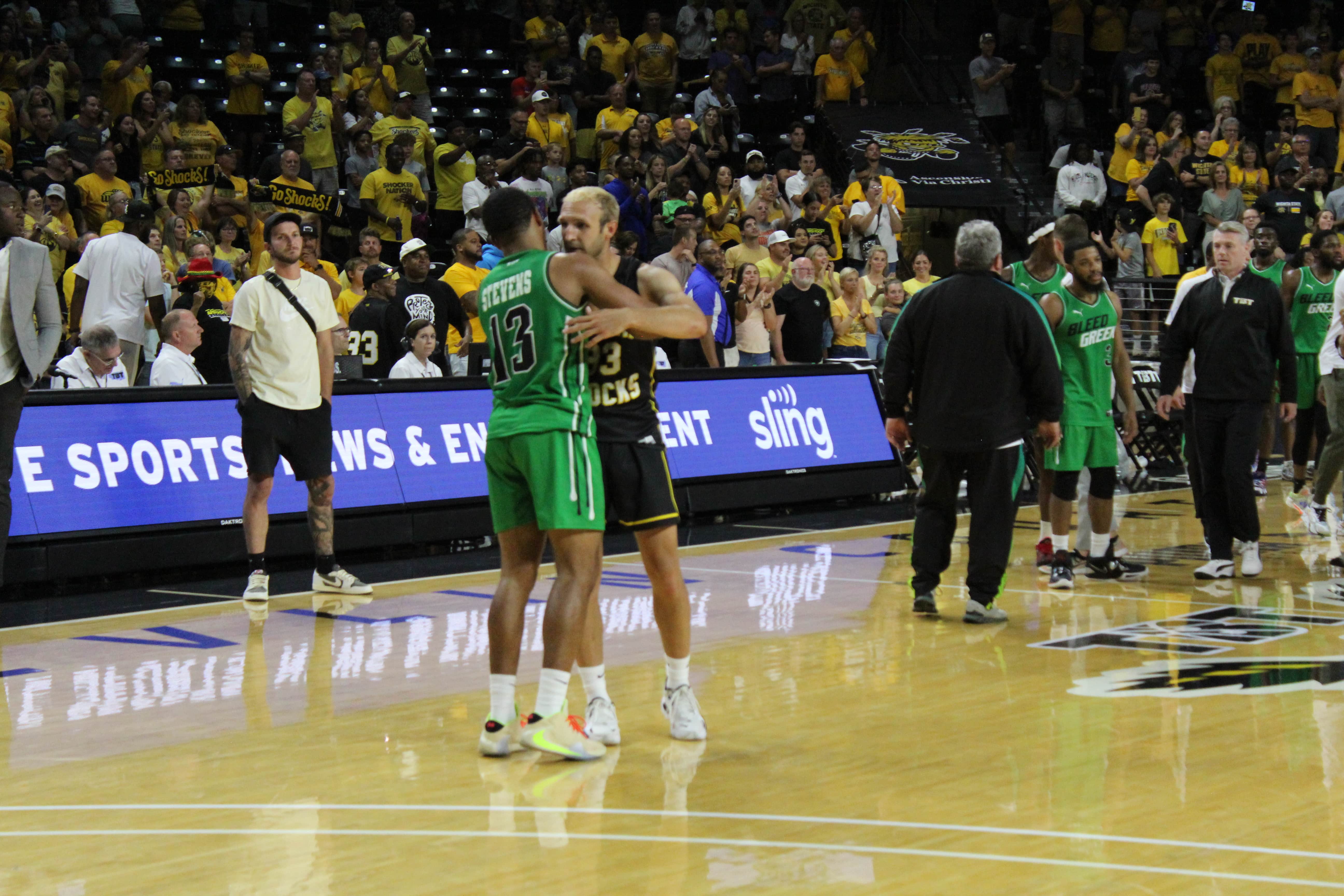 The Basketball Tournament enters its third year in Wichita.

AfterShocks (1) battle for three quarters before creating separation against the Air Raiders (4) with a 70-60 victory.

AfterShocks (1) seal home court advantage, having to fight past Bleed Green (7) with a 70-69 win.

5) Jared Allen for the Lone Star Legend. His 30-point, six rebound game is the sole reason the team stayed in their first matchup against Purple & Black.

4) Purple & Black’s Jacob Pullen willed his team into the second round. Facing off against Jared Allen, he put up 30 points and one assist. Bleed Green saw this and took note. In the second-round matchup, Pullen put up 18-points, two rebounds, and one assist.

3) The Air Raiders’ Shawndre’ Jones did the heavy lifting but had help from another player on this list. His first game was incredible as he scored 32 points, six assists, and three rebounds. He followed this up in a battle in their second round with 16 points, four rebounds, and four assists.

2) The first night went to Shawndre’ Jones; however, his teammate Davion Warren showed out both days. Warren scored 32 points as well in that first game. In the second game, he scored 23 points, six rebounds, and three assists.

WHAT A GAME. Shawndre’ Jones led the way with 32pts for the @AirRaidersTBT VICTORY 🙌🏽 pic.twitter.com/WaSpBnz0nr

1) Brandon Jefferson with three solid games. In his first game, he put up 19 points and two assists. Followed that up with 21 points, seven rebounds, and five assists. His last night ended with only 18 points, two rebounds, and one assist.

Quintin Dove’s scored a team-high 26-points for the B1 Ballers.

Despite the loss, Quintin Dove was A1 for the @B1Ballers 🪣

Darrel Willis showed up for his team. He put up 11 points, 12 rebounds, and an assist. He followed up with 16 points, seven rebounds, and one assist.

Conner Frankamp had a quiet first game with ten points and four assists. In the second, he put up 21 points and one assist.

There is one clear standout when looking at all the regional games for the basketball tournament. The first day was full of great games that all had battles, but only one was a surprise. That game was Eberlein Drive (2) losing to Bleed Green (7). In the first quarter, Eberlein Drive had taken control, pushing its lead up to 24, while Bleed Green hung around with 15 points.

Eberlein Drive was at two different points in the second quarter, up by double-digits (11, 10). However, Bleed Green again battled back 42 and gained a point back, scoring 34 points. After the half, the narrative remained the same as Eberlein Drive had three double-digit leads (11,11,10), ending the quarter with a score of 65-55. It was at this point that everything changed.

Bleed Green had its most significant deficit down by 12 with 7:59 left in the game. Shannon Shorter and Brandon Jefferson stepped up big. With Elam Ending in effect, Bleed Green got within a single point 71-70. Shorter got the team the lead with a layup and a jumper. After a lay-up and a made free throw by Shaq Buchanan, Eberlein Drive was up 78-76, a point away from the Target Score. However, the fight on the other end of the court finished the game.

A steal by Thomas Bell led to a missed 3-pointer by Brandon Jefferson, who followed his shot, came up with the offensive rebound, and found a wide-open Jordan Stevens, who drained his 3-pointer to win 79-78. After that, Bleed Green pushed the pedal down as it drove right over Purple & Black in the second round with an 87-62 victory. Unfortunately, Bleed Green’s Cinderella run ends with a well battled game.

🔊 Audio breakdown of the Gregg Marshall special that the @AfterShocksTBT used last night to win the game in @thetournament.

Wichita State players have been running this play for more than a decade. Last night 5 former Shockers were on the floor to execute it in 2022. pic.twitter.com/C66gOHrHUF

AfterShocks face off against Gutter Cat Gang for a ticket to Dayton.

AfterShocks have a lot going for them in the basketball tournament. The issue is that they do not have a prolific scorer. This team is balanced and attacks you in waves. As an opponent, they are lengthy everywhere except their guards. However, all players stick to you and swarm you if you come into the paint. To beat this team will require a lot of iso-opportunities. AfterShocks have grit, which showed as this team battled against better-scoring teams. This team has nothing be blue skies in front of them. They are just waiting to punch their ticket.

Suppose you are interested in watching Gutter Cat Gang (Omaha Champion) vs. AfterShocks (Wichita Champion) in the TBT Quarterfinals.  The game is televised on ESPN 2 and will be played on Wednesday, July 27, at 8 p.m. CST. The AfterShocks will have a home court advantage, and I expect it to be loud and packed.