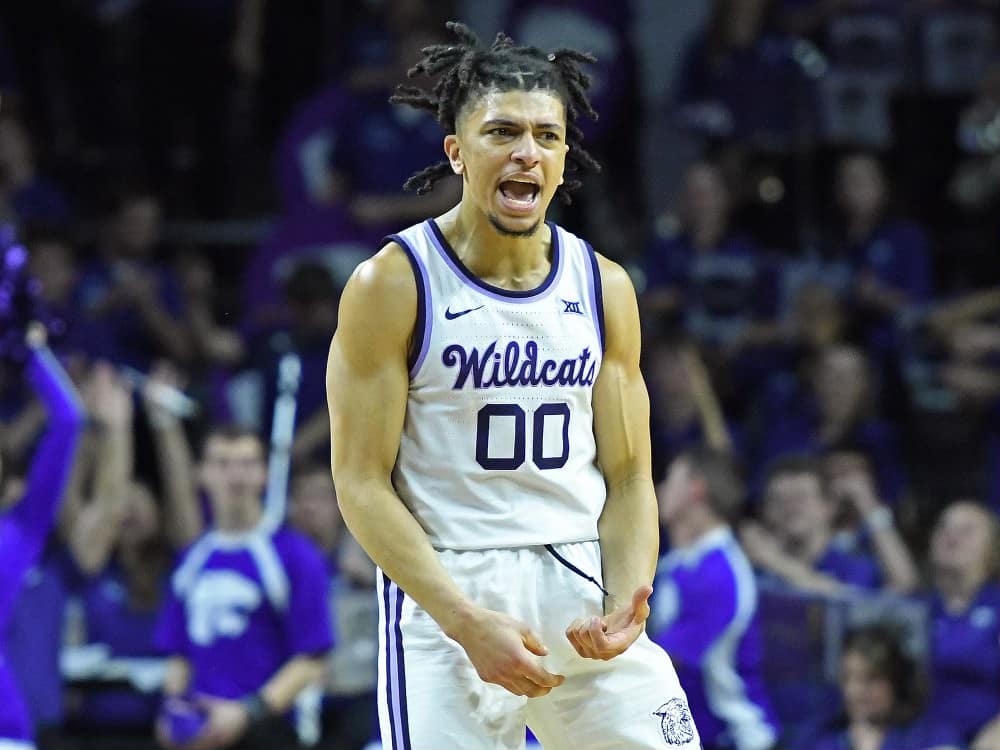 Mike McGuirl always knew he wanted to play basketball, but still can’t believe where his journey has taken him.

“It was a long journey, a tough journey, but a worthwhile journey,” said Mike McGuirl, who played college basketball at Kansas State.

McGuirl’s collegiate career ended in 2022, five years after it started with the Wildcats. Over that time, McGuirl grew from the definition of a role player to one of Kansas State’s go-to players.

Like many basketball players, McGuirl’s love for the game started at a young age.

Mike McGuirl grew up in Ellington, Connecticut, the son of two hoopheads. His mother and father both played basketball at Western New England. As long as his mind can go back, McGuirl said he remembers watching his dad on the court.

“He didn’t really enjoy anything else as much as playing basketball and I just saw that joy in him. It sort of gave me that same joy. I ran with it,” said McGuirl.

McGuirl also ran with the football, growing up a two-sport athlete. An injury on the gridiron forced him into a tough decision.

“It got to a point where I was like, okay, I’m just going to focus on basketball,” said McGuirl.

So McGuirl dropped the pigskin and picked up the basketball. But that wasn’t just a decision to play one sport over the other. Instead, it was a long-term goal.

“I had this sort of outlandish confidence to myself, like, I want to be the best basketball player ever,” said McGuirl.

Ellington, Connecticut is a small town with a population of about 16,000 people.

Smacked right in the middle between Hartford, CT, and Springfield, MA, Ellington is known more for its silos than its backboards. You can probably count more cows than basketball players.

I can say this because I grew up one town over in Vernon, CT. We share the same county. And it’s not the typical place for a Division I athlete to rise up from.

“I knew my surroundings and everything,” said McGuirl. “Everything was just so out of reach, that I just stayed in the moment, had fun, and continued to grow.”

Countless other athletes, including in basketball, have turned East Catholic into a powerhouse program in central Connecticut.

“I learned the most at East Catholic basketball camp. I was able to get better in a shorter amount of time,” said McGuirl.

His infatuation with East Catholic continued as he attended Eagles games growing up. But when McGuirl first stepped foot inside 115 New State Road as a high-school student, he said his overall mindset needed to change.

“Coach was all about toughness. I got there, I was a soft kid. Soft-spoken, just a soft kid,” said McGuirl.

Luke Reilly is something of a legend at East Catholic, and really east of the Connecticut River in the high-school hoops realm. The boy’s basketball coach at East for over 20 years, Reilly’s approach made all the difference in McGuirl’s game.

McGuirl said that scrimmages didn’t have any fouls or out of bounds. In essence, it was madness inside that East Catholic Gym. But the madness has helped the program win five state championships, including the 2016 Class L State Championship, when McGuirl was a junior.

Mike McGuirl insists he never would have had the confidence or ability to lead the Eagles to that title without those practices.

“We were just like killing each other every day, but I benefited from it so much. I got tougher, got stronger. And he really helped me take my game to the next level,” said McGuirl.

Mike McGuirl: “My dad had told me back in high school, if you don’t get a scholarship for basketball, you’re gonna have to pay your own way for college.”

That was the deal Pat and Mike made, and it never left Mike’s mind while at East Catholic. So through all of the grinding, he started getting offers by his junior year. It all came without a moment’s notice. McGuirl received his first offer from Sacred Heart coach Anthony Latina.

Instead of pausing in the moment and stopping with one offer, McGuirl continues to improve, with goals of getting an offer from a bigger, power conference program.

Eventually, he had over 20 offers and was seriously considering schools like Hofstra, Kansas State, St. Bonaventure, and Vermont. He also held offers from multiple Ivy League schools, but that meant he’d have to pay his own way to college. It was a final visit to Kansas State during a live recruitment period that sealed the deal.

There’s an intimidation factor that goes along with playing for a college basketball coach that’s led a team to the Final Four.

Weber’s coaching career was entering year 20 in Division I during McGuirl’s freshman year. The former Illinois coach led the Fighting Illini to the 2005 Final Four and had also won the Big 12’s Coach of the Year award in 2013. The Wildcats were coming off an NCAA Tournament appearance in 2017.

While Weber certainly had a good grip on his players, it wasn’t built on fear. He helped develop McGuirl into a legitimate scoring threat, averaging 11.8 points his senior year. McGuirl was also a two-way player and controlled the offense, dishing out nearly four assists per contest.

“By the end, I got really comfortable with him. He got comfortable with me,” said McGuirl. “He taught me stuff that I’m going to take with me the rest of my life on the court, off the court, because he’s big into giving back. And it really resonated.”

During his first few years on campus, Kansas State was at the top of the Big 12. They made back-to-back NCAA Tournaments in 2018 and 2019, winning the conference’s regular-season title when McGuirl was a sophomore.

Injuries to key players his freshmen year knocked away the idea of a redshirt. But it helped him carve out a role on that Big 12 banner-winning team. That year, he averaged 17 minutes of play and started in two games. Gradually, McGuirl earned trust in Weber and went on to start 66 more games in his Kansas State career.

Mike McGuirl’s journey has led him to The Basketball Tournament.

The letdown of the college basketball career being over can be tough. But McGuirl’s first love was basketball, so he doesn’t plan on stopping anytime soon.

TBT is a summer tournament where many former college hoops stars team up on alumni teams to try and win a $1 million grand prize. McGuirl’s team, Purple & Black, plays their opening round game Friday at 7 p.m. in Wichita.

“This is a great opportunity for me, to me to help this team, and try to make it all the way,” said McGuirl.

He’ll share the court with other former Wildcats stars like Jacob Pullen and Bill Walker. But more than anything, McGuirl is excited about how everything has come full circle. Last year, he attended Purple & Black’s TBT game in Wichita. The squad fell to Omaha Blue Crew, a Creighton alumni team, 60-59. But McGuirl was drawn to the atmosphere.

“I was like, man, this is cool. But in my head, just as a hooper as myself, I’m thinking man, I (could) kill it out here,” said McGuirl.

So for Mike McGuirl, this isn’t the final stop. But it is the next stop on his basketball journey. Six years after starring for a small private school in Connecticut, McGuirl will play on the ESPN family of networks in a premier summer tournament.

“It’s crazy how everything just comes full circle. Now I got the opportunity to play, to back up the thoughts that were in my head,” said McGuirl.

After all, Pat McGuirl said he either needed to pay his way to college or earn a scholarship on the court.

For Mike McGuirl, it’s safe to say all of the work paid off in the end.

One thought on “Mike McGuirl: A Journey That Never Stops”