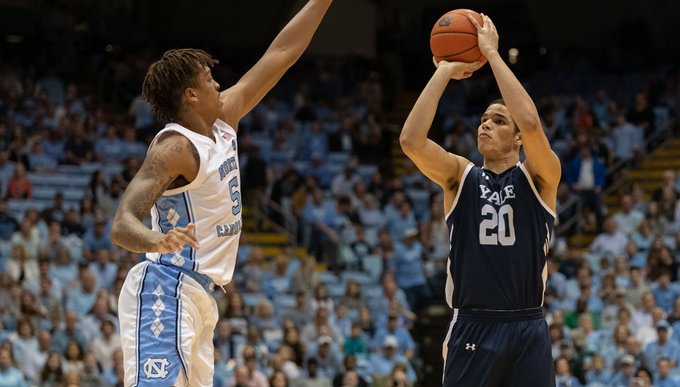 Kansas State was hit hard after the 2019-2020 season, with four players returning after losing three to graduation and six in the transfer portal. Mike McGuirl will need to step into the leadership role for the defensive-minded Wildcats who finished 40th in KenPom defensive efficiency last season. Dejuan Gordon will be looked to for more productivity in his sophomore season. With playing time up for grabs the Wildcats should be able to push one another to get better in a hurry to challenge in the Big 12.

Utah State will need to find if they can be successful without the talented Sam Merrill. The pieces are still in place for the Aggies to contend for the Mountain West title. Neemias Queta will be a key contributor after being sidelined for part of the 2019-2020 season. Queta will become the key focal point in the offense without Merrill in the lineup. Brock Miller and Alphonso Anderson will need to be solid from the perimeter to open up the inside for Bean and Queta.

Yale will be a favorite to win the Ivy League for a third consecutive season. Paul Atkinson is the returning Ivy League player of the year and will look to repeat as he leads the Bulldogs. Yale will be able to score and more importantly defend the big question coming into the season is how the Bulldogs will replace the combined eight assists per game from Jordan Bruner and Eric Monroe. Atkinson and Azar Swain will score, but who will step up to fill in the holes.

New Mexico State has lost seven conference games in the last five seasons, so there is no question they are a favorite to win the Western Athletic Conference yet again. Jabari Rice and Johnny McCants will hold down the court as each was nearly 40% from the 3-point range last season. Chris Jans plays with a deep bench keeping his players fresh on the court which will help the Aggies moving forward as they look to use an all-team effort to get the job done.

Wichita State was hit hard in the offseason. Expecting to lose one player to graduation the revolving door started as seven players decided to transfer out of the program. The Shockers went from losing their leading scorer to losing four of its top six scorers. The Shockers landed a big transfer immediately in Alterique Gilbert from UConn. Gilbert averaged 8.5 PPG and 3.1 APG and will provide steadiness and leadership as the point guard for the Shockers. Dexter Dennis decided to withdraw from the NBA draft and will be a focal point of the offense. The rest of the lineup will be up for grabs as competition for the spots should fuel the Shockers all season long.

Growing pains were fought in the 2019-2020 season for Northwestern. However, a young team is now a year older and a year wiser. Pat Spencer will be tough to replace but any number of the returning core of Northwestern will be able to step up and fill that voided leadership role. Chase Audige practiced with the team last season and will be ready to go after averaging 9.6 points and shooting 37.1% from 3-point range in 2018-2019 with William & Mary.

It took some time for Cincinnati to fully understand John Brannen’s offense and the main focus of it, Jarron Cumberland, will no longer be there. The Bearcats received big news when Keith Williams and Chris Vogt decided to withdraw from the NBA draft. Vogt and Williams will be the main focus of Cincinnati in 2020-2021. Colgate transfer Rapolas Ivanauskas will look to fill some of the void left behind as he averaged 13.1 PPG and 7.6 rebounds last season. Ivanauskas struggled from 3-point range in 2019-2020 but shot 43.8% in 2018-2019. A 2018-2019 Ivanauskas will make or brake Cincinnati’s season.

Minnesota lost Daniel Oturu and 20.1 PPG but received good news when Marcus Carr decided to withdraw his name from the NBA draft. Minnesota’s season right now is sitting on the shoulders of the NCAA. If Liam Robbins and Both Gach are granted a waiver to play immediately, Minnesota becomes a team that can compete with the top tier in the Big Ten. Carr will become the prominent offensive weapon while running the point. Brandon Johnson will add some support coming from Western Michigan where he averaged 15.4 PPG and 8.1 RPG in 2019-2020 with the Broncos. Gabe Kalscheur will provide some support and consistency on the wing, but Minnesota two waivers away from being a scary team in the Big Ten.

Timmy Allen withdrew from the NBA draft and Utah’s season gained hope. Allen was a Pac-12 second-team all-conference selection in 2019-2020. Allen will be the main focus of every defense the Utes face, but with a year of experience as the focal point, Allen will be used to the challenge. Rylan Jones had a fantastic freshman season as the point guard for the Utes and will steal some attention away from Allen while easily creating opportunities for their star. Ian Martinez may find his way into the starting line up as a freshman with the departure of Both Gach where his athleticism will create some opportunities for the Utes.

BYU lost four of its top five scorers from a season ago. This will be an entirely new team for the Cougars with plenty of opportunities for incoming players to take top spots. Purdue transfer, Matt Haarms will be the main focus for BYU as he will look to be a rim protector and have more opportunities on the offensive end. Transfer Brandon Averette will work his way into the starting lineup and should be an impactful player after averaging 12.8 PPG and 3 APG for Utah Valley las season.