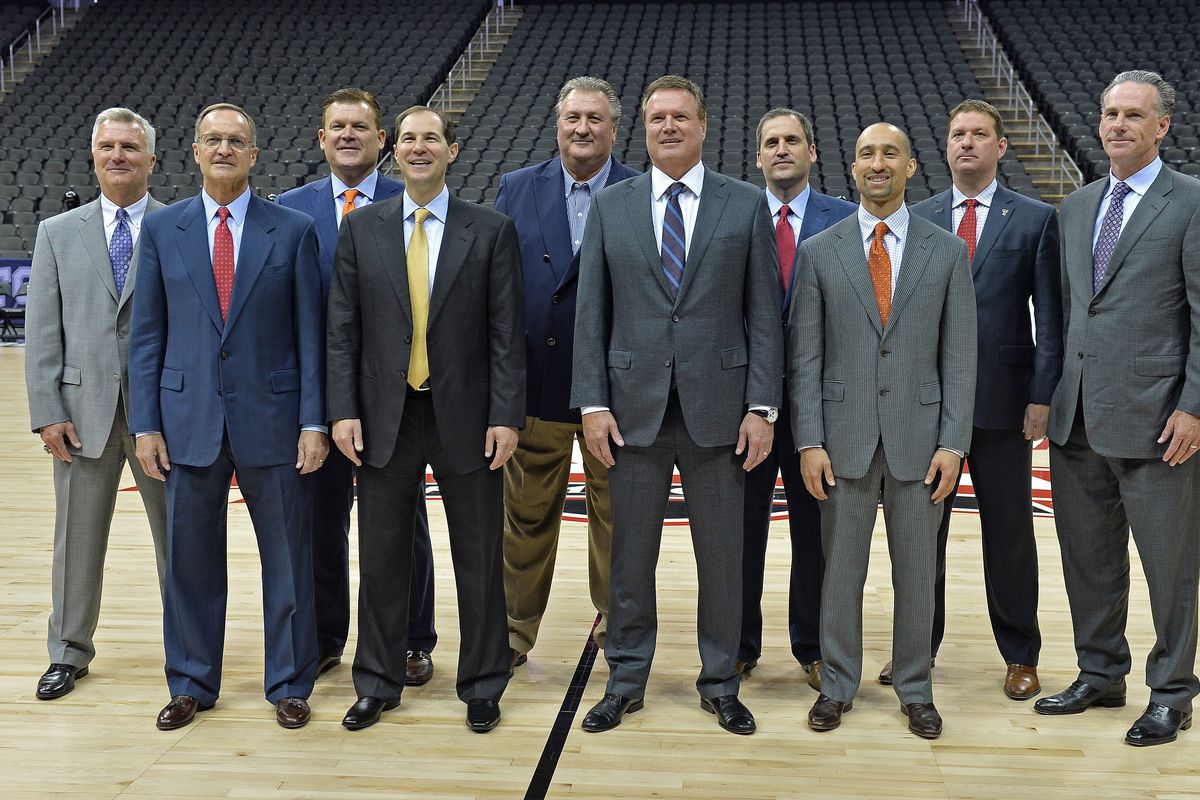 When it comes to head coaches, the Big 12 has it all.

Whether we’re talking about some of the best ever, some of the best young coaches, and some coaches that may just be past their prime the big 12 has a guy. 10 coaches represent the Big 12, but where do they rank among each other?

A no brainer here. Self has won 15 regular season titles, more than all Big 12 head coaches combined times 5, and is the only coach in the Naismith Memorial Hall of Fame. Self also has a national championship (the only Big 12 coach with the honor), 8 Big 12 tournament championships and 6 Big 12 Coach of the years to add to his massive lead as the top coach in the Big 12.

When I was preparing this article, I fully expected to have Bob Huggins as the 2nd, but after looking at the accomplishments Beard takes the spot. In just his few seasons since taking the job at Texas Tech, he has won a Big 12 Regular Season title and took his team to the national championship. He is a 2x Big 12 Coach of the Year, the only coach besides Self to have multiple of this honor. He was also recognized as the AP Coach of the Year in 2019.

Huggins is an absolute legend in the college basketball world. He sits at 8th all time in wins as a coach, but his lack of tournament success at West Virginia keeps him at 3. He is yet to win a Big 12 Regular Season Title or Conference Tournament, and has only won Big 12 Coach of the Year once. Huggins also might be the best coach ever to never win an AP or Naismith Coach of the Year award.

This one was extremely close between Kruger and Scott Drew. Kruger beats him slightly thanks to his final 4 appearance in 2016. Kruger is a Big 12 Coach of the Year winner and has made the Sweet 16 twice with the team.

Due to this seasons success, many people probably expected him to be higher. If he were to have made the final 4 or better if the tournament occurred he would have been ahead of Kruger and possibly Weber. However, Drew has never made a final 4, has never won a Big 12 Regular Season Championship or Tournament Championship, and only 8 tournament appearances since he began in 2003. The future is bright though, with a recent Big 12 Coach of the Year honor and expected success the next few seasons.

Dixon has had a very successful coaching career, however not as good as he might like since beginning at TCU. Dixon hasn’t earned any awards as a coach or his team since he took the job, and the team hasn’t made the Sweet 16 since he was hired. Dixon has won a Naismith Coach of the Year, but that was during his time at Pittsburgh

Prohm’s two conference tournament championships puts him ahead of the final 2 coaches despite little tournament success. He is yet to win a Big 12 Regular Season title or Coach of the year, but is a great recruiter and has done a great job developing players like future top 10 nba draft pick Tyrese Haliburton and last years draftee Talen Horton-Tucker.

This one might seem like a surprise, but Smart besides the final 4 run in 2011, Smart hasn’t accomplished much especially in the Big 12. He has a 90-78 record at Texas, and 0 individual or team awards since his hire. Smart has a very good team this year, and with a successful season can jump up to that 7 or 8 spot on the ranking.

Boynton is relatively new to head coaching, getting his first stint in 2017 with Oklahoma State after being an assistant most his career. He is 51-49 as a head coach and hasn’t accomplished anything, but has plenty of time to add to the resume as the years go on.