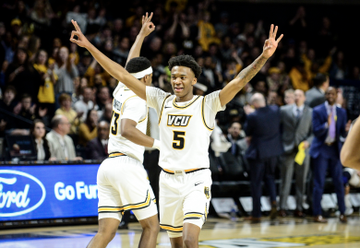 Rhode Island may have lost a lot of production from last year, but the Rams will always be a threat as long as Fatts Russell is around. Luckily for Ram fans, he withdrew from the 2020 NBA Draft. URI hopes that Syracuse transfer Jalen Carey can get a waiver. He missed most of last season for the Orange with a thumb injury. Without the waiver approval, this is a team that will rely heavily on Russell’s playmaking ability and David Cox’s coaching. That’s still enough to keep Rhode Island formidable in what’s expected to be another deep Atlantic 10 this season.

VCU also comes into the season having lost a lot of its production from last season. That may not be a bad thing, as the Rams underperformed. Nah’Shon “Bones” Hyland showed flashes of his talent last year and will be expected to be “the guy” this season. Outside of Hyland, there are a lot of largely unproven guys that will need to step up for VCU to compete. Keep an eye on Jarren McAllister, a former three-star recruit that saw limited action last season, but has freakish athleticism. While the Rams may be a step behind the top of the league this year, they’ll still be capable of making some noise.

If last year was a rebuilding year for the Bisons, than 2020-21 could be a big season in Nashville. Lipscomb returned to the Atlantic Sun title game after dropping back just to third place following the historic 2018-19 season. The Bisons are anchored by league player of the year candidate Ahsan Asadullah, who is a monster in the paint. He went off for 40 points in Lipscomb’s opening A-Sun tournament game last year and averaged 29.7 points over three tournament games. D-II graduate transfer Romeao Ferguson is expected to add a veteran presence in the backcourt. Lipscomb will be dangerous again this year.

Murray State will be two years removed from Ja Morant, but the Racers are doing just fine. Matt McMahon is one of the best young coaches in the nation, and he’ll have Murray State competing for an Ohio Valley Championship once more. Tevin Brown and KJ Williams will anchor the team this year. JUCO transfer Justice Hill will be expected to step in and run the offense immediately. The Racers are expected to be the favorites in the league, though Austin Peay will be right there with them. Murray State will once again be a team you don’t want to see in March.

Vermont has dominated the America East over the last 15 years. However, the Catamounts will now have to adjust to life without star forward Anthony Lamb. Stef Smith should step into the starring role, while reigning defensive player of the year Ben Shungu locks down the Vermont defense. Two graduate transfers in Murphy and Andre will be expected to fill the void in the post left by Lamb. Still, the America East is Vermont’s to lose this season. The Catamounts will be a dangerous mid-major once more.

Saint Mary’s will most certainly take a step back with the losses of Jordan Ford and Malik Fitts. However, Randy Bennett isn’t one of the best mid-major coaches for no reason. He will keep the Gaels competitive and build around returning post players Dan Fotu and Matthias Tass. Tass was on pace for a good season last year before tearing his ACL in December. Don’t be surprised if the Gaels have a player or two that comes out of nowhere to carry them. While Saint Mary’s may not be able to keep pace with Gonzaga this year, they will still be plenty competitive with everyone else.

SMU flew under the radar last season, quietly closing in on 20 wins before the cancellation of the AAC Tournament due to COVID-19. The Mustangs have most of their key cast members returning and can push for a league title. Feron Hunt provides a punch down low. Throw in Yor Anei if he gets his waiver request approved, and it’ll be tough to drive on the SMU defense. The backcourt is deep with Jolly, Davis, and McNeill. This is a sleeper team to sneak into the Big Dance and upset a team or two.

Notre Dame made a late push onto the bubble last season and was more formidable in the ACC than most thought. The Irish have a big task in replacing John Mooney’s production, as he was the nation’s second-best rebounder at 12.7 per game. A pair of three-star recruits in Sanders and Zona will be expected to step in and help with that. The strength of this team will be in the backcourt. Cormac Ryan is a true point guard who should be able to let Hubb and Goodwin focus more on making plays. The pieces are still there to make a run at an NCAA appearance.

Davidson really dropped the ball last season. The Wildcats were one of the biggest disappointments a year ago, fading all the way to seventh place in the A10. The spotlight will be off this year, which may be just how they like it. Kellan Grady is still a sight to behold, and the emergence of Hyunjung Lee means the future is bright. The depth at the guard position should allow the frontcourt time to settle into their roles. Davidson is poised for a bounce-back season in Bob McKillop’s 31st year at the helm.

Liberty is coming off its best two-year stretch in program history. However, the players responsible for that have all gotten their degrees and moved on. The Flames will now have to figure out how to reload quickly while still being the hunted in the Atlantic Sun. McGhee and Cuffee are a great starting point, but the young core around them will have to step up and fill big shoes. Liberty can still compete in the A-Sun, but talks of an at-large bid are out the door for this season.