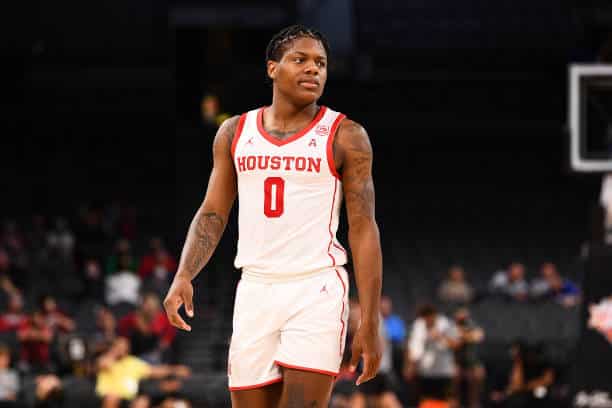 College basketball has followed in the NBA’s footsteps as a game dominated by the three-point line. These sharpshooters are running it back.

Talk about working on your game. As a freshman, Stute was abysmal from three, connecting on just 28.6% of his attempts from deep. But Stute had one of the best improvements in college hoops, hitting over 43% of his three-point shots last season. The forward is primarily a spot-up shooter, but you just can’t ignore someone who worked on their craft that much to go from a liability to a threat.

The Toledo forward put up some eye-popping numbers last season, hitting 48.2% from deep. The MAC is an underrated conference, so I’d believe Shumate would be able to put up similar numbers in a power conference. He did only attempt about four threes per game last season, which is some of the least on this list, but that’s not to say that with more shots he wouldn’t hit at such a high rate.

Entering his third year at Saint Louis, Jimerson’s outside shooting has been a key part of the Bilikens’ success. As a freshman, he lit it up hitting 42.9% of his shots from deep. Sophomore year he took a slight dip but was back to 42% last season, showing no signs of slowing down. Some guys have one really good year from deep but Jimerson’s been as consistent as any.

Davis can launch from anywhere on the court, which is part of the reason why his percentage is a bit lower than most of the guys on here. However, if there’s one guy in college basketball who can catch fire and put up video game numbers, it’s Davis. He’s hit 10 threes in a game on three different occasions and only trails Fletcher Magee by 80 threes for the all-time record. Barring any injuries, he’ll get that with no problem.

The lefty, Vescovi doesn’t have the style that Davis does, but it doesn’t matter. He’s as pure a spot-up shooter as they come and can hit off the dribble if needed. The Volunteer star has improved his percentage each of his three years in college basketball and was up to 40.3% last season. Expect the same type of performance this year.

In the ACC last season, Girard III hit on over 40% of his shots from deep, a sigh of relief after two below-average seasons for a guy who holds the New York State all-time scoring record. There will be no Buddy Boeheim to help free Girard up this year, but Jim Boeheim could opt to start Girard at the two instead of running the point. During the ACC Tournament last season, JG3 went 8-for-22 from deep, and a big reason why was transfer Symir Torrence running the point. I’m expecting similar if not better numbers for Girard this season.

The ACC has some incredible returning three-point specialists and Goodwin is one of the best. He hit close to 46% of his three-point shots last season and stayed above 40% against ACC teams. He’s got a bit of a slower release but it’s very nitpicky to nitpick someone who has that good of numbers.

A college basketball journeyman, Bolton has been great wherever he goes. In year one at Penn State, he shot 36.1% from deep and it earned him some looks at the next level. Bolton continued that success and Iowa State and eventually carved a path to come to Gonzaga. Last year, Bolton knocked down 46% of his three-point shots, taking just over four per game. It was a huge increase from the year before, but there’s no reason why he can’t have another wild season like that.

Loyer started his college basketball career at Michigan State and showed promise, but couldn’t quite get enough playing time to show his abilities. But last year at Davidson, Loyer proved what he’s made of, knocking down 74-of-169 threes.

In last year’s Atlantic 10 Championship Game, Saint Louis practically face guarded Loyer from halfcourt and it still didn’t matter. Against their 1-3-1 zone, Loyer found creases for wide-open shots. He’s a deadeye shooter and needs barely any space to get his shot off. His younger brother, Foster, is just as good of a shooter and is heading to Purdue this season.

In big moments, it’s as if he levels up even more. In the ACC Championship game against Duke last March, Cattoor went 7-for-9 from deep for 31 points. He’s back for a fourth year with the Hokies and should be in for another major season.

Like Davis, Abmas is a little guy who can put up big numbers from deep. Of course, he’ll go down in college basketball lore for his hot shooting as a freshman in the 2021 NCAA Tournament, but Abmas actually has very good precision for someone who’s averaged 8.6 three-point attempts for his career. In 2020-21, Abmas hit a 42.9% rate, so don’t be fooled by some shots that might look errant – they’re not for him.

One of the top overall returning players in college basketball,  McGhee is similar to Abmas in that he has tons of range, shoots a heck of a lot of three-pointers, but still connects at a high rate. But McGhee’s numbers are that much more impressive as he stands at just 5-9. With a quick release and being able to hit off balance, McGhee is one of the most fun players to watch in college basketball.

If you watched Scheierman throughout last season, you knew he was one of the most talented three-point shooters in the country. If you waited until March, you caught on. He went 11-of-23 from deep during the Summit Conference Tournament and against Providence in the NCAA Tournament.

The Creighton-bound transfer can also score in different ways but when you take a shooter like Scheierman and place him in the Creighton offense, big things should happen.

Sasser’s a pure scorer, so it makes his numbers even more impressive. Anytime someone is multi-dimensional and draws opposing teams’ best defenders, it makes the display that much better. If he stays healthy, Sasser will be one of the best players in the country this season.

The Kansas State transfer was one of the most coveted players in the portal and landed at Miami (Fla), making the ACC even that much better in terms of three-point shooting talent. Last season, Pack connected on 43.6% from downtown, coming up five threes short of 100 for the season.

It’s the fact that Pack, a 6-0 guard, did that for two straight seasons in the Big 12. He’s got the ball in his hands most of the time and plays in one of the toughest conferences in the country. But Pack got the job done night in and night out and gives the Canes a superior three-point threat.