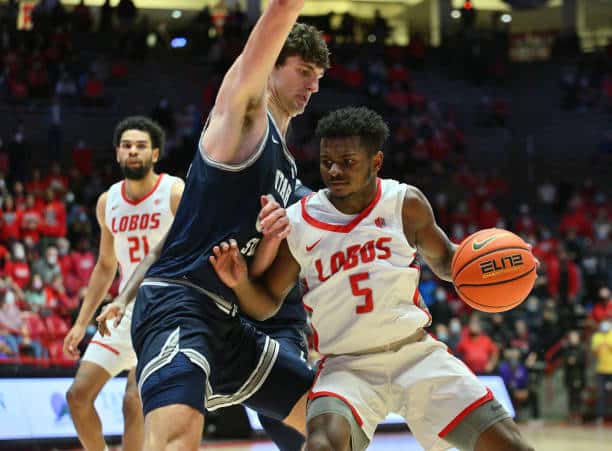 The New Mexico Lobos have lots of stability that will help them be a dark horse in the Mountain West Conference.

The countdown is officially on. For the second straight year, CBB Review has ranked the top 100 teams in college basketball heading into next season. We will reveal the next team daily until we get to number one. Our number 77 ranked team is the New Mexico Lobos.

In the world of transfers, New Mexico was able to return their top 5 leading scorers while losing only two bench rotation players. Coach Richard Pitino filled some holes in the transfer portal by getting both Morris Udeze and Josiah Allick. With their forward position being answered in the off season, New Mexico has all of the tools needed to make a run at the Mountain West Conference.

Mashburn Jr comes off a great season for New Mexico, leading the team in scoring. He is a dynamic guard that is a very good pull up shooter. He is comfortable both running pick and rolls and spotting up on the perimeter. His first instinct is to attack the basket with velocity, something he was very successful with last season. He had a very high usage rate, but he was still really efficient given the circumstances. He was one of the best pick and roll ball handlers in all of college basketball last season.

The do it all point guard for the New Mexico Lobos will once again have his hands full of responsibilities for this squad. He is their best point of attack defender, and he will be tasked with guarding the opponents’ best perimeter player once again. He is more than capable on offense as well, highlighted by his 42 points outburst this past season against Air Force. He will primarily run pick and rolls where he will look to evenly mix it up between facilitating for others, getting to the basket, and pulling up for his own shot.

Analytic To Know: 0.872 Points Per Possession in Pick and Rolls

However, New Mexico was very efficient in these actions, averaging 0.872 points per possession when the ball handler shot in pick and roll, good for 37th in the country per Synergy. With both of their high octane guards back, expect to see a heavy diet of these actions once again for New Mexico.

After a subpar season, New Mexico looks to be in a prime position to jump up the rankings. New Mexico will once again go where there guards go in Mashburn and House. However, they will have a lot more help this season in transfers Udeze and Allick. Look for Allen-Tovar, Johnson, and Jenkins to all take jumps as well. They have a couple of interesting non conference games in SMU and New Mexico State that should give a tell on how this team will gel together.

The defense will be the main turning point for this team. It is known that they will be solid on offense, highlighted by the previously mentioned back court pair. They had one of the worst defensive 2 point percentages last season however, but the two big men transfers will look to shore that hole up some. It will also be important for Mashburn, House, and Johnsons to all guard the perimeter. This team will most likely not have the greatest defense, but they do have the pieces to get the job done on that end of the floor.

They have a really solid seven-man rotation. After that, it will depend on how some of these freshman apart of the 51st ranked recruiting class perform. The 3 freshman signees make up the best Mountain West recruiting class this season by a fair bit per 247Sports. If even one can make an impact this season, New Mexico will have a very good 8 man rotation that I think will do some damage this year. I won’t be surprised if the New Mexico Lobos end up doing a little bit of dancing come March.

Ceiling: NCAA Round of 32 Exit