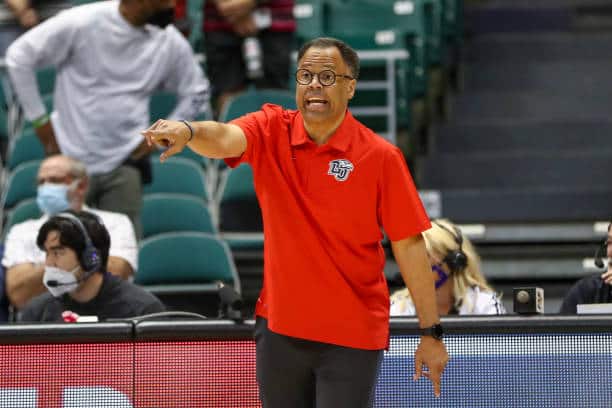 The Liberty Flames return one of the top scorers in college basketball, hoping that can put them on top of the mid-major world.

CBB Review is once again ranking the top 100 teams heading into the 2022-23 season. Each day we will reveal the next team until we reach the team slotted at number one. Coming in ranked number 61 are the Liberty Flames.

The Liberty Flames have started to turn into a bit of a mid-major powerhouse, hitting at least 22 wins each of the last five seasons. You can attribute a lot of that to the Ritchie McKay effect, who now in his second stint with the Flames, has built a culture based on winning.

Players have clearly responded to that, as the Flames only lose one starter and two other semi-important players from last year’s team. So, it’s practically the same team from last year, making the Liberty Flames the clear favorite to take the Atlantic Sun.

This might be the easiest Team MVP in all of this year’s CBB Rank and that’s not because the Liberty Flames don’t have any other notable players on their roster. It’s just a testament to how great of a player McGhee is.

There’s a chance, that with another efficient season and the correct media attention, McGhee makes one of the national All-American teams. That doesn’t often happen to players in mid-major conferences, but the 5-9 player is electric, lights out from three, and has grown each year.

Last season, McGhee took his game to a new level, averaging just short of 25 points per game. Obviously, this is a team that brings back nearly everyone from a year ago, so other players could step up and take some of the load off McGhee’s shoulders. But when you’re as talented as him, that still might not matter. Expect another eye-popping year out of the fifth-year star.

Can you really go wrong with either? Coach McKay told me both Rode and Robinson saw improvements in the offseason, and I wouldn’t be wrong with choosing either for the Flames’ make-or-break player. I listened and went with both.

The forwards actually put up very similar numbers last year, each averaging about 9ppg/4.5rpg. Rode delivered as a playmaker, averaging over four assists per game.

This year, both will be expected to step up as the Liberty Flames need to replace Keegan McDowell. It should be a fairly easy transition, and as seniors, these two should be ready for another jump into a higher role.

The Liberty Flames launch a lot of threes (21st in the country last season), and they also make a lot of them. A big part of that was McGhee’s ability to hit nearly 40% of his attempts from deep while putting up over 11 per game. But Robinson, Rode, Peebles, and Preston also delivered from deep and return for another season. With all of that chemistry and experience, there’s no reason why the Flames won’t be able to put up another strong season efficiently from long range.

The Liberty Flames are one of our highest-ranked mid-major teams not including some of the high-major conferences like the Atlantic 10, Mountain West, and American Athletic Conference. This is deservedly so, given they return so much production from last season.

A lot of opposing teams will try and key in on Darius McGhee, which often doesn’t work anyways. But, with a veteran supporting cast, it’s undeniably tough to limit Liberty’s points and their style of play. They’ve got it down to a science.

Last season the Liberty Flames struggled down the stretch, going 3-3 in their final six regular season games. This season, it’ll be important for them to not fade down the stretch. With such a senior-led group, it shouldn’t be an issue, but it’s certainly something to keep an eye on.

The game everyone will be looking to is when the Flames visit Alabama on November 11. We expect to see Liberty claim an automatic bid for March, so how they fare against another projected NCAA Tournament team is crucial. But they also have games against Northwestern, Oral Roberts, and Bryant to try and prove what they’re made of. The game against Northwestern is a part of the Cancun Challenge, with a potential matchup against Auburn.

Last season, the Flames did impress in the non-conference, taking down Missouri and Northern Iowa, and losing to BYU, Iona, and Stanford all by five points or less.

Ultimately, this team will outdo last year’s finish. There’s no reason why the Liberty Flames can’t win at least 25 games and pull off a classic 13v4 or 12v5 upset in the NCAA Tournament.