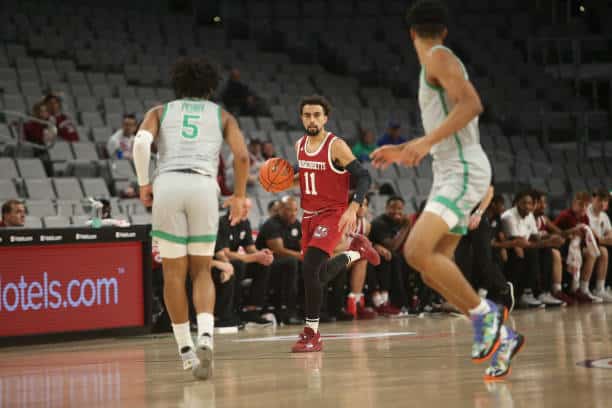 CBB Review is once again ranking the top 100 teams heading into the 2022-23 season. Each day we will reveal the next team until we reach the team slotted at number one. Coming in ranked number 78 are the UMass Minutemen.

The UMass Minutemen fanbase has been craving a winning product for years and Frank Martin may be the answer. While previous head coach Matt McCall produced productive offensive teams, they lacked the defensive communication and intensity to compete consistently in the Atlantic 10. The 2021-22 season saw this trend in its most drastic form, in which the Minutemen finished 35th in offensive efficiency and 343rd defensively (per Torvik).

Martin comes in with quite the opposite reputation. At South Carolina, his teams were hit or miss offensively but always difficult to score on. With a few key returning pieces and a plethora of high-upside transfers, this UMass program can see success as early as this coming season.

The Massachusetts native spent a year at Wichita State before coming to Amherst, where he provided immediate production. In 2020-21, Fernandes scored a more quiet 11.1 points per game, overshadowed by now West Virginia Mountaineer, Tre Mitchell. Last season, he became the primary ball-handler and his production increased in stride. Fernandes especially put the A10 on notice in his final three games in which he scored 28 points (10-19 FG), 29 points (11-17 FG), and 26 points (10-20 FG) respectively.

Fernandes is a quality ball-handler and facilitator who can create consistently from the outside off the dribble. He is a patient and crafty driver who can manipulate defenders and create space to get to the rim. Fernandes enters the 2022-23 season as the team’s go-to scorer and the clear leader in the locker room.

Based on the dynamic of this team, it is difficult to define any singular player as “make or break.” There are several unknown new pieces with upside, and odds are some will pan out right away while others will not. However, Diggins is perhaps the most capable of that group.

Diggins entered the UConn program last season as the 59th ranked recruit in the class. He struggled to find playing time within a deep and talented roster.

As a sophomore at UMass, Diggins is projected to make the starting lineup as a combo guard. He has a great first step with the ability to get to the rim as well as pull up from the mid-range. If Diggins lives up to his star potential this year, the Minutemen could be a dangerous squad.

Analytic to Know: 301st in Adjusted SQ Half Court Defense

The stat above refers to UMass in the final year of the McCall era. Shot Quality is a service that projects scores by removing the basketball luck factor of a basketball game. It quantifies the expected point value of each shot based on factors such as the player, the shot location, the contest of the shot, floor spacing, etc.

In other words, in the half court setting, the UMass Minutemen ranked 301st in preventing the opponents from taking high quality shots. They were 298th against the pick and roll, 298th against cutters, 282nd around the rim.

Martin enters with a mostly new roster which could lead to some of the same issues. However, it would be foolish not to expect improvement from the unit. The question is whether it is drastic enough to be strength for UMass or is remains a work in progress.

UMass is a difficult team to project with all the moving pieces, but this remains true throughout the A10. With five new coaches in the conference, and an entirely new team in Loyola-Chicago, the identity around the league will shift.

We do expect that both UMass and the conference as a whole will improve. If the A10 is indeed a three bid league, can the Minutemen be included in that trio? Dayton and Saint Louis appear to be the most established and talented teams in the conference. Loyola-Chicago and VCU also return quality rosters and have more of a proven track record.

However, the UMass Minutemen have the pieces to compete. Fernandes is expected to be a preseason all-conference representative. Wildens Leveque is a multi-year power conference contributor who should anchor the interior. Tafara Gapare has loads of talent and a tape full of eye-popping plays. At the very least, UMass will develop an identity and a sense of hope in their program restoration.