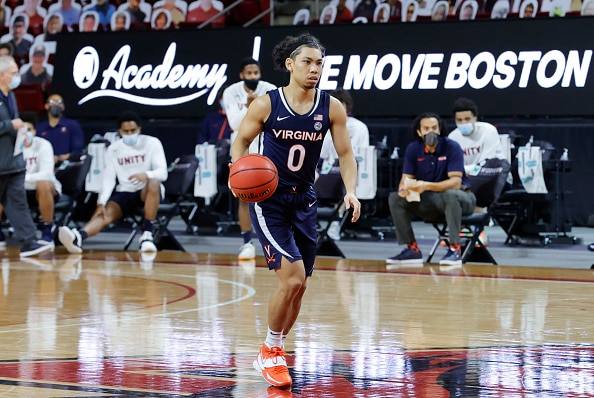 With plenty of college basketball players reaping the benefits of being able to play an extra year because of COVID, a lot of records are bound to break.

The Detroit star enters his fifth and final season with the Titans. To this point, he’s put together a remarkable career, scoring 2,734 points in four seasons. Davis opted to stay with Detroit, even though he was sought after heavily in the transfer portal.

Davis needs at least 516 points to pass Portland State’s Freeman Williams as the all-time leader in points by mid-major players. That would also place him second all-time, right behind Pete Maravich. So far, Davis has scored at least 600 points in three of his four seasons, with his single season-high coming as a freshman with 784 points scored. However, he’d need to erupt for 934 in the year to pass Maravich. It’s technically doable, but he’d need to average over 31 points per game at that rate.

Behind the arc, Davis is behind Fletcher Magee by just 80 threes for the all-time record in 3PM. His career-low in a season was 83 in 2020-21. Besides that, Davis has eclipsed 100 threes each season in college basketball. It seems like a lock that he’ll top Magee for that record.

Liberty’s Darius McGhee can also pass Magee. He stands 143 made threes behind and last season, the Flames’ flamethrower knocked down 142 trifectas. But Davis is so far ahead, it really doesn’t matter. The record could be his for a long time.

Breaking records at a program as prestigious as North Carolina doesn’t come around too often, but Tar Heel center Armando Bacot can do just that this season.

Bacot enters year four with the Heels at 1,002 career boards grabbed. He only trails Tyler Hansbrough by 217, so it’s well within reach. Last year, Bacot averaged 13.1 rebounds per game. If he continues at that pace, it would only take him until game 17 to accomplish the feat. As long as Bacot stays healthy, he should overtake Psycho T for the top spot at some point in the season.

On the all-time board, expect Bacot to at least finish with 1,400 boards at the end of the season. That would place him in the top ten in college basketball history. If he reaches 1,500 rebounds (which is more than doable after last year’s numbers), Bacot would only be shy of Kenneth Faired, Tim Duncan, Derrick Coleman, and Malik Rose. Elite territory.

35 wins. That’s what Bill Self needs to pass Phog Allen for the most wins in program history. It’ll happen soon and Self will demolish the record. But will it be this season?

Last year, in Kansas’ title run, the Jayhawks won 34 games. So, in essence, they’ll need another strong Final Four run and probably five or fewer losses. Is it doable? Yes. We’re not talking about an improbable number like 40 wins.

My best guess is that Self will get the record very early on in the 2023-24 college basketball season. But keep it on your radar, because the odds aren’t terribly impossible for this year.

There’s almost no doubt that Kihei Clark, now in year five at Virginia, will easily get the Cavaliers’ program record for career assists.

With 539 dimes entering the 2022-23 college basketball season, Clark needs 144 to pass John Crotty for the title belt. In 2019-20, Clark had 176 assists. Last season, he had 153. So, with COVID the least of a problem it’s been as far as affecting games, Clark should be able to mirror that 2019-20 season and break the record sometime in late February or early March.

Clark should finish his college basketball career fairly high on the all-time leaderboard too. If he gets 161 assists to reach the 700 mark, the UVA legend will be inside the top 100 all-time.

By the time he leaves Indiana, there’s a chance TJD could be the record holder in all three of the Hoosier’s top big man defensive categories.

Jackson-Davis already holds the program record for most offensive rebounds, so he’ll shatter that even more this season. At 797 career boards, the senior trails Alan Henderson by 296. If TJD can average nine rebounds per game and Indiana goes on an extended postseason run, he could eclipse Henderson by the tail end of the season.

TJD also only trails Jeff Newton by 49 blocks for the Indiana all-time record. Last season he deflected 81 shots, so barring any setbacks, that’s bound to be his accolade as well.