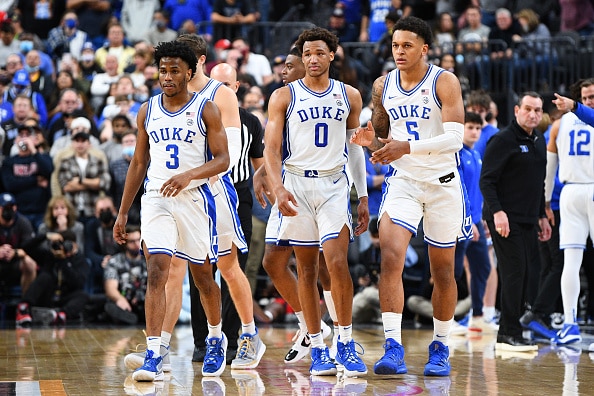 The ACC/BIG Ten Challenge has plenty of opportunities for teams to come away with resume-building wins.

The Big Ten has taken a major step on the ACC in the conference hierarchy to start the 2021-22 basketball season. This is the ACC’s chance to make up some ground. The amount of tournament teams each conference gets is largely based upon these games. Let’s check out the ACC/Big Ten Challenge matchups:

Offense vs defense… transition-based offense vs halfcourt-based offense…this game features a major contrast in styles. With Iowa’s new superstar in the post, Keegan Murray, UVA will be challenged to keep their bigs out of foul trouble. Additionally, the Hoos have struggled scoring for long stretches during each of their games. However, they have made major strides limiting turnovers and limiting penetration on defense recently. That could be the difference-maker against Iowa.

Illinois has suffered a couple of rough losses over the past week but Kofi Cockburn has not slowed down. While the Irish have improved defensively, they probably don’t have the strength to slow down the 7’0 phenom because quite frankly, nobody has. It will be a matter of whether Notre Dame can start capitalizing more consistently on the open looks they’re generating on the other end.

The Gophers have not played too much competition but at least they’ve taken care of business. At 5-0, only complacency could hold Minnesota back. They do a phenomenal job limiting transition opportunities which is a product of both smart shot selection and recovery after offensive possessions. We saw Pitt start to open up the long-range jumper against UMBC but their defense couldn’t hold their end of the bargain. There are too many flaws with the Panthers for me to pick the upset.

Purdue’s early-season performance certainly warrants them their number 2 ranking. Experienced veterans like Sasha Stefanovic and Trevion Williams have merely paved the way for 7’4 sophomore Zach Edey. Needless to say, this Boilermaker team is stacked. Florida State will be missing some depth in this game but their talent level gives them a high enough ceiling to play up to better competition. I’m just not sure I’d pick them to sustain a top tier team for 40 minutes.

Indiana is another defensively-sound team that will use their length to contest virtually any shot. The good news for Syracuse is Buddy Boeheim is made for teams like this. He has been money from the mid-range so far and it’s only a matter of time until the long ball starts to fall. We’ve seen some teams start to exploit Syracuse’s 2-3 zone but Indiana has not seen it in almost a decade.

Although both teams have taken steps down, it is still a rematch of last year’s round of 64 tournament matchup. Expect a defensive affair in this one. Rutgers’ offense is predicated on generating high to low action but Clemson will not give up easy buckets at a consistent rate. Meanwhile, the Tigers have been able to generate threes with their frontcourt off pick and pop action, but Rutgers handles ball screens especially well.

This matchup offers intrigue in that both teams have been performing above expectation and have the opportunity to show their true worth. The issue with the Wildcats has been production off the bench, but they have a dynamic trio Pete Nance, Boo Buie, and Ryan Young. With a Wake team that features more size than last year, they must keep the Wildcats out of the lane and force them to resort to tougher jump shots.

Last Friday against Gonzaga, Duke showed that they finally have enough pieces to be truly elite. Paolo Banchero has been raved about and even Trevor Keels has received some attention but it was returning forward Mark Williams’ two-way efforts that put them over the top. It’s hard to see Ohio State pulling this out unless they are able to control the pace and perhaps get Duke into foul trouble.

The Hokies are a well-polished team that has only struggled when opponents offer more strength and physicality. Maryland definitely has some size, which is often used to facilitate the offense for Fatts Russell, their star point guard. How they do on the glass has been the determining factor for the Hokies in each of their first batch of games and it should heavily decide the outcome of this one too.

Maybe not quite the prolific offense we were expecting from Tom Izzo’s squad but one thing we know is that they will defend. Louisville, on the other hand, has often forced themselves into contested threes, which will only be exasperated by Michigan State’s scheme. Let’s keep an eye on the return of Cardinals head coach Chris Mack and how that affects their offensive sets.

Athleticism is definitely where the Cornhuskers have an advantage here. They run the five out, which utilizes the offense and creates drive and kick opportunities. For NC State, it’s a matter of creating second chances. Dereon Seabron, who is averaging almost 20 points per game, is in the 85th percentile of all of college basketball in offensive rebounding rate. He will be the x-factor.

As usual, this is a Wisconsin team that will play well defensively in all aspects of the game. Georgia Tech has scorers that can create off the dribble, most specifically Michael Devoe and Jordan Usher. If they get hot, the Jackets will have a chance to pull away. More realistically though, Wisconsin will control the game, take care of the ball, and shoot rather efficiently.

Perhaps, this is not the most talented team either of these powerhouses have put out, but the entertainment value is still there. North Carolina has had trouble fully adapting to coach Hubert Davis’ new concepts which especially leaves them vulnerable on the defensive end. However, they have the size to combat Michigan’s interior offensive threat and the ability to create transition offense off of turnovers.

Miami’s struggles have come from teams that can spread the floor and shoot the lights out. Penn State has the ability to capitalize on that but has not done so consistently. Against an offense that prefers to operate in the half-court setting, look for Miami to utilize the trap and play aggressively on defense. The real battle will be who controls the pace in this one.

One thought on “ACC/BIG Ten Challenge: Predictions and Preview”