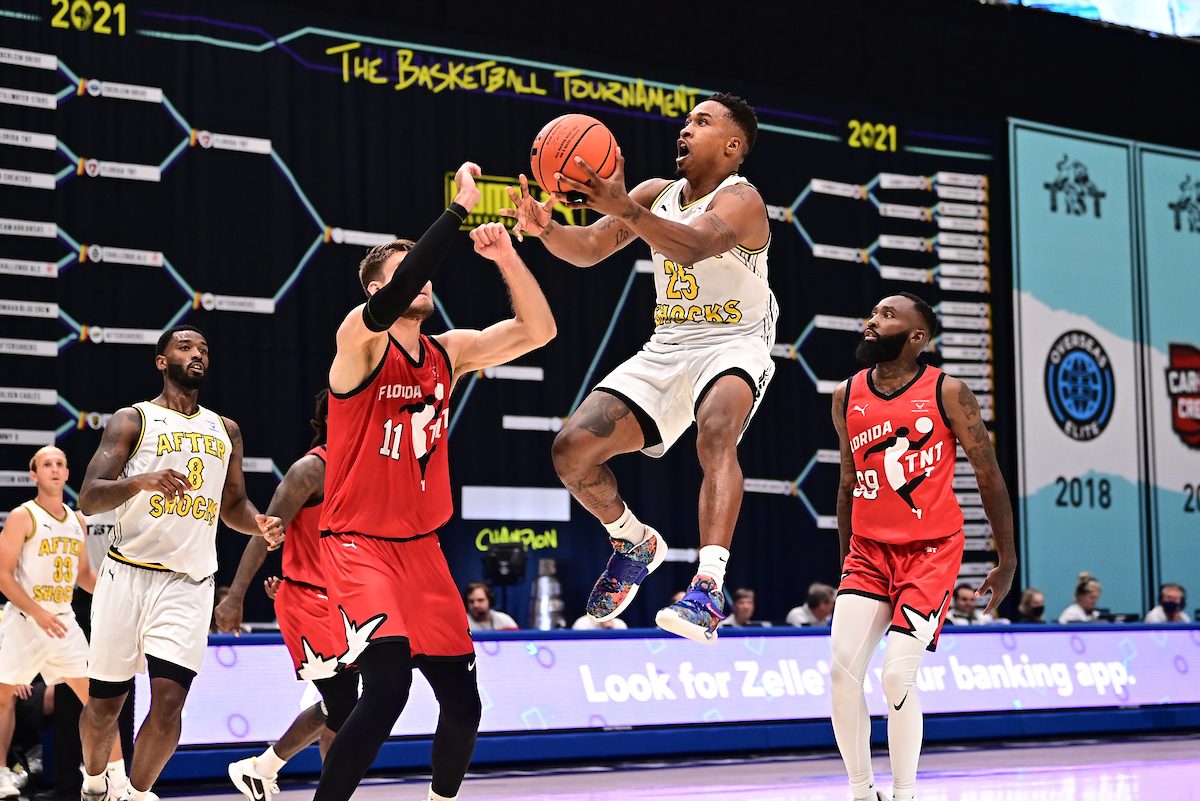 TNT IS TWO WINS AWAY FROM $1 MILL pic.twitter.com/oC39RvmOyg

THERE ISN’T A SOUL ON THIS COURT WHO CAN GUARD KENNY BOYNTON‼️@FloridaTnt is up 18 in Q3 on ESPN pic.twitter.com/GYRgBIVFrU

The AfterShocks struggled to get Conner Frankamp going offensively. They looked sluggish and just not prepared. Zach Brown left the team to return to play professionally in Germany, a teammate of Rashard Kelly’s, Tre McLean for the remainder of The Basketball Tournament.

Going into the Elam Ending in The Basketball Tournament matchup between the AfterShocks, trailing 82-59, and Florida TNT. Florida TNT struck first with an alley-oop pass to Andrew Smith, making the score 84-59. TNT blew up a couple of empty possessions for each team again with an open shot from Dominique Jones. Markis McDuffie responded with a layup. He was fouled on the shot and also sunk the free throw. AfterShocks trailed 86-62 in The Basketball Tournament matchup.

Kenny Boynton came down and created some separation for an open three-pointer that found the bottom of the nylon. McDuffie came crashing in on a missed shot from Tyrus McGee. Markis went up but was fouled. Missing the first free throw, McDuffie made the second. A miss on both ends led to an open look by Dominique Jones, who sank the open 3-pointer for the final score of 92-63.

Boeheim’s Army advanced to the semifinals of The Basketball Tournament, escaping multiple droughts and overcoming cold streaks. The Syracuse alumni team caught fire at the right time, dethroning the defending champs in the process.

Dwight Buycks was virtually unstoppable for Golden Eagles. Despite fouling out before the end of the game, he still poured in 22 points. Elgin Cook delivered in the paint, putting up 10 points and 7 rebounds. However, the rest of the Golden Eagles were held pretty quiet.

Boeheim’s Army was led by Tyrese Rice’s 20 points and Chris McCullough’s 14 points, 10 rebound outing. Malachi Richardson added 9 points and 7 rebounds, with most of it coming down the stretch. Boeheim’s Army used its’ size doubled Golden Eagles in points in the paint.

The Elam Ending was set at 72 as Golden Eagles led 64 to 62. However, Boeheim’s Army was in control of the tempo, in the midst of a big run. Both teams traded buckets, but it was clear that Rice’s ability to change speed would be the difference. He used multiple lay-ins to steer Boeheim’s Army into the lead and end the game on a floater, 73 to 69. They will face Florida TNT for a shot in The Basketball Tournament Championship game at 11 a.m. CST on Sunday, August 1st.

Team 23 knocked off Sideline Cancer with a 78-71 final in The Basketball Tournament. Eric Washington led them in scoring with 16 points, 3 rebounds, 2 assists, and 2 steals. Marcus Hall followed up with 14 points and 1 assist.

Team 23 might be the most athletic squad in TBT HISTORY 😳😳

They lead 22-14 after one on ESPN2 pic.twitter.com/kOirovluKp

Walt Lemon added 11 points, 1 rebound, 2 assists, and 1 steal. Raphiael Putney added 10 points, 6 rebounds, and 1 assist in rounding off the double-digit scorers in this matchup in The Basketball Tournament.

MARCUS HALL WITH ANOTHER ELAM ENDER!!!!

TEAM 23 IS ON TO THE SEMIFINALS!!!!!! pic.twitter.com/gJPgkwgneJ

The Basketball Tournament set the target score to 78 to finish this matchup, with Team 23 leading 70-68 over Sideline Cancer. Eric Washington struck first with a drive of the baseline for a layup. An empty possession for Sideline Cancer led to Washington connecting on another jump shot. A hard drive by Marcus Hall got him fouled and put him on the charity stripe. Hall sunk them both. Trey Lewis for Sideline Cancer put them on the board with a big 3-pointer. The score was 76-71. Hall came down for Team 23 to win on a floater and advance in The Basketball Tournament.

Despite losing Wes Clark the previous game, Blue Collar U still used its talent of scoring in bunches to advance past The Money Team in an exciting ending. An ending where Blue Collar U had the lead 75-69 and put the target score at 83 in The Basketball Tournament matchup. A posted Nick Perkins got the baseline for an up and undershot to create more separation in the game. A hard rebound foul on Malcolm Thomas put Perkins on the line for an additional point from the free-throw line and ball possession. An Alley-oop from Jordon Crawford to Jarrod Jones splitting defenders for 2 points. Hamilton came down for a jumper and a quick answer by Jordon Crawford to bring the score to 80-73.

A steal that led to a Jones’ Dunk. Xavier Munford was fouled and put on the line for another point. Crawford drove for a layup after the free-throw. After a foul and another possession. It allowed Crawford to add 3 points for The Money Team.  A floater by Hamilton answered and brought up the next basket win for both teams, 82-81. Hamilton’s strong drive allowed Perkins to tip the ball back in for a Blue Collar U win 84-81.

The Money Team used the three-headed monster of Jordon Crawford, Xavier Munford, and Peyton Aldridge to keep pace with BCU. Together those three combined for 42 points, with Crawford leading TMT with 6 assists.

Blue Collar U was carried by Nick Perkins’ monster 23 points, 11 rebound night. Blake Hamilton added 18 points, while CJ Massinburg and Lamonte Bearden each scored 10. Blue Collar U will have a chance to advance to The Basketball Tournament Championship game at 1:30 p.m. CST on Sunday, August 1st.

Featured Image from The Basketball Tournament