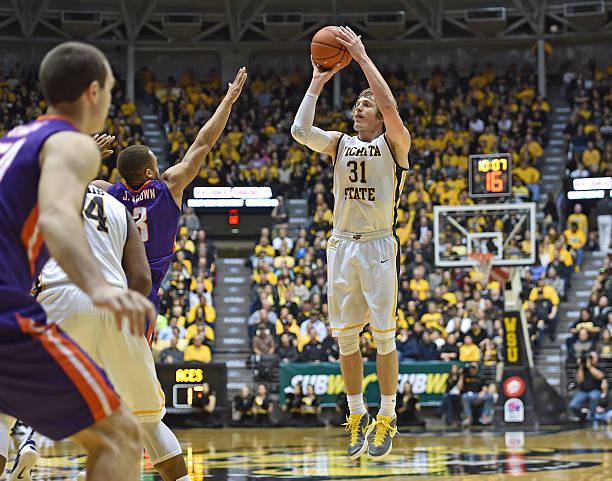 AfterShocks joined The Basketball Tournament in 2019 and shattered the previous record for attendance.

The AfterShocks set the attendance record in The Basketball Tournament 2019 with 7,184.

The Basketball Tournament team also included a non-Shocker player in Shannon Shorter, who became a solid piece for the AfterShocks. They only made it to the second round, losing to Sideline Cancer.

After a year off due to Covid-19, the AfterShocks has restocked and added some talent. As the Wichita State Shockers graduated some of its players, this group is looking forward to the finals in The Basketball Tournament. A majority of the players for this AfterShocks team are playing professional basketball overseas.

While this is one of the younger teams in The Basketball Tournament, Wichita will benefit its fans as it will be their second year. With Wichita being fully opened, the expectation is that this region will be a loud one for these Shockers Alumni. The first game will be against a team of alumni from the Patriot League.

Talent in @thetournament getting better each year! One player that could be included is @AfterShocksTBT’s guard @CFrankamp_23 who was the 3rd leading scorer in Spain (same league as Daum and Randle) this season 👀👀 https://t.co/rKFJjFS8kn

This year, AfterShocks are looking to go deeper in The Basketball Tournament, putting together a lot of firepower from deep and some real junkyard dogs. They have another solid and competitive team that is arguably underrated even as a 2-seed. The Top seed for this region is Eberlein Drive.

The AfterShocks team is very different for 2021 than it was in 2019 for The Basketball Tournament. The Shockers were much bigger and focused on shot blockers and jump shooters. This was a reason that they think the AfterShocks failed to advance against Sideline Cancer. In that game, Sideline Cancer made 14 3-pointers. With Ron Baker as General Manager, his focus was a little different. The team looked for players that were able to knock down threes and rebound.

AfterShocks, grabbed Conner Frankamp, a former Wichita North graduate, KU Transfer, and Wichita State Alumni. In 2020, Frankamp was the Greek League Top Scorer and All-star. In 2019, he was the Balkan League steals leader. As an overseas pro, Frankamp is averaging 17.9 points, 2.5 rebounds, and 3.8 rebounds. He looks to be a prominent leader and scorer. In his four years at North High in Wichita, Kansas, he became the City League’s career all-time leading scorer. He broke the City League single-game scoring record putting up 52 points as a sophomore. Even with his ability to score, that is not his only strength, he wants to win, and that’s an attitude that this team is built on.

The next two players are firsts for The Basketball Tournament. In his second year away from Wichita State basketball, Marks McDuffie has averaged the most points professionally on this AfterShocks team. McDuffie averaged 20.4 points, 6.3 rebounds, and 1.7 assists per game. McDuffie is a huge scorer. He has length and can pull or drive very effectively.

Samajae Haynes-Jones follows close behind, averaging 20.2 points, 3.6 rebounds, 3.3 assists, and 1.5 steals per game. Haynes-Jones is another player that creates shots, can push the tempo, and create shots for himself and others. This team is built to score and continues with this next player.

Tyrus McGee is the first player not from Wichita State. McGee played for Iowa State and has played overseas since graduating. This past year was his best as a pro, putting up 18.1 points, 4.1 rebounds, 3.3 assists, and 1.0 steals per game.

Wichita’s own @CFrankamp_23 is currently 3rd in scoring in Liga ACB at 16.4 ppg pic.twitter.com/LU4fjo0mYw

One of two players who did not play for Wichita State is David DiLeo, a teammate of Conner Frankamp in Spain. He sits in first place all-time in three-point field goals (337) in Central Michigan basketball and Mid-American Conference History. DiLeo is averaging 8.1 points, 1.7 rebounds, and 0.7 steals for UCAM Murcia.

Darral Willis has spent three overseas professional seasons with Russia, France, and Italy, becoming the Cypriot Cup MVP and Champion in 2019. He is averaging 10.4 points, 5.4 rebounds, and 1.0 assists. He has signed on to be a part of Germani Brescia, a top Italian team. Willis is a player that can be inside out. He has a nice 3-point shot but is also a threat to drive. He is fast for his size.

The other players for AfterShocks are true grinders from Wichita State. Rashard Kelly had his best pro-season this year, averaging 12.2 points, 7.8 rebounds, 1.9 assists, and 1.4 assists per game. This team is built with ball handlers, rebounders, scorers, and a player with a nose for the ball. Tekele Cotton is one of Wichita State’s best defensive players and most explosive players all-time. Cotton is known for some of his huge dunks, but how he locked down players. Cotton had the second-best season of his pro career this year, averaging 14.5 points, 3.8 rebounds, 3.1 assists, and 0.8 steals per game. The other scrappy player and the last one to join the team is Zach Brown. Kelly and Brown are a pair that dominated the boards for Wichita State and plan to do so again in The Basketball Tournament. Brown came off a great season overseas averaging 17.4 points, 4.1 rebounds, 2.0 assists, and 1.5 steals. These players are definitely the ones who are great defensively and can explode around the rim to help with rebounds and put backs.

Touré Murry is the most pro-center player. He played for the New York Knicks, Utah Jazz, and Washington Wizards. He is now overseas and playing some of his best basketball. Murry averaged 16.4 points this past season, 2.8 rebounds, 2.9 assists, and 1.5 steals per game. Murry was an important guard during his time at Wichita State.

Here’s a look at the complete roster for the @AfterShocksTBT.

Peep those scoring numbers for the two 2019 graduates in @ThatMcDuffieKid and @sjones2200, who both averaged 20+ ppg in their second year as a pro. pic.twitter.com/7aEk5kpklN

Jaime Echenique will still be at The Basketball Tournament but will not play. After having his senior year cut short due to Covid-19, he was hoping for some redemption as an AfterShock. However, he has an injury and will be cautious.

AfterShocks pivoted to pick up Damonte Dodd. He is eighth all-time in blocked shots for Maryland. He played overseas in Poland and Czech Republic. Dodd will provide the length and be the big man for this team. While he is not an offensive player, he is a solid rebounder and can block shots. Dodd averaged 7.8 points, 4.3 rebounds, 0.6 blocks, and 0.6 assists per game in the 2019-2020 season.

Excited to announce the addition of @thetournament Grad-Transfer Tyrus McGee!

If the AfterShocks move on, the team will face either in-state rival Kansas State University Alumni, Purple & Black, or former Missouri Valley Conference opponent in Creighton University Alumni, Omaha Blue Crew. Both games would be a lot of a draw for the Wichita Regional for The Basketball Tournament. This would definitely boost ticket sales and could be one of the bigger draws for that region. Wichita will likely be filling Charles Koch Arena this summer for these games in a very basketball-focused city.