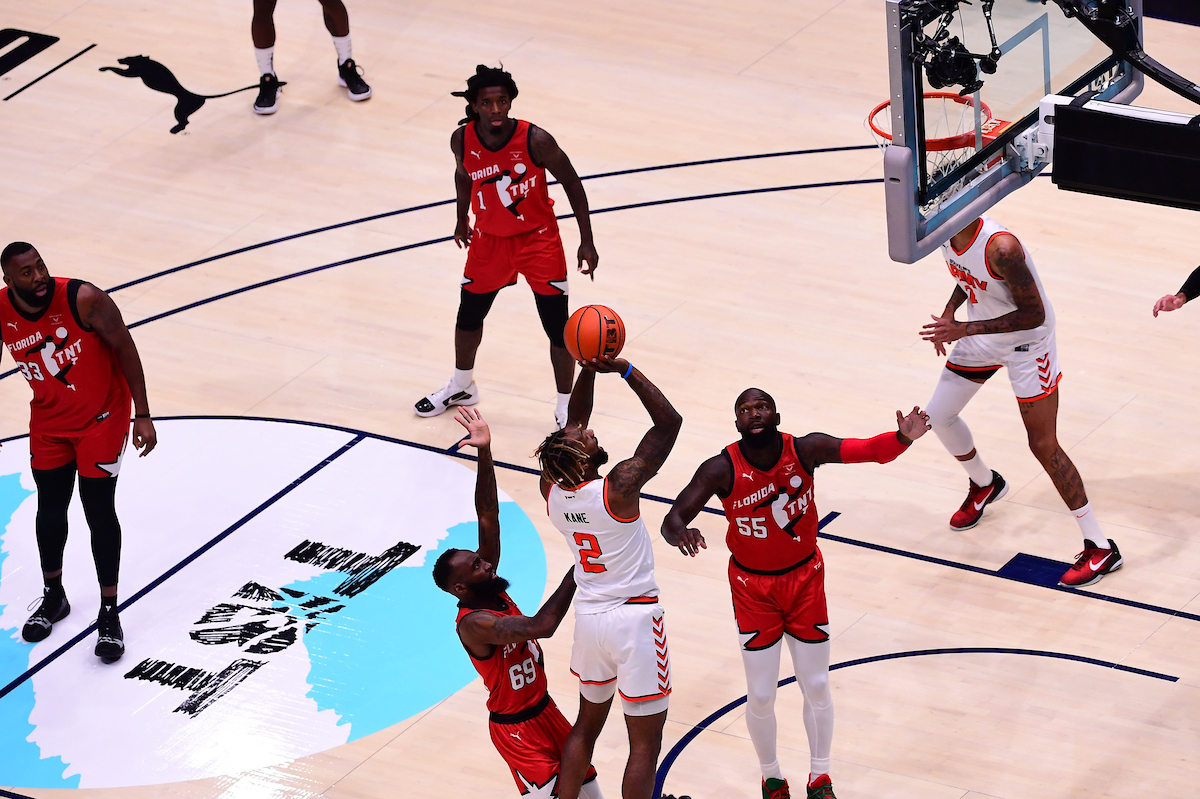 Boeheim’s Army advanced to the championship game in The Basketball Tournament with a 66-64 win over Florida TNT. Tyrese Rice put up 24 points, 4 rebounds, 7 assists, and a crucial steal. Chris McCullough was the only other double-digit scorer as he put up 18 points, 7 rebounds, and 1 assist.

Keith Clanton is the most dominant big man in TBT 2021 💪

He already has a double-double for @FloridaTnt (10 pts, 11 reb) a minute into the second half! pic.twitter.com/DVYErHozOG

It's a one point game on ESPN!!! pic.twitter.com/asMMPWrnPu

In this surprisingly low-scoring game in The Basketball Tournament, Kenny Boynton’s two made free-throw going into the Elam Ending and made the final score at 66 for Florida TNT. Boeheim’s Army trailed 58-53 but started the Elam Ending with the ball. Tyrese Rice struck first with a big 3-pointer. Rice drove the lane and put up a nice floater. Rice again came down off a turnover and pulled up for another 3-pointer. Boeheim’s Army had its second lead of the day 61-58. Tristan Spurlock got fouled driving the lane and made one-of-two free throws.

A big block by Dominique Jones caused a foul on Deandre Kane. Jones made his free-throw and the possession, putting the score at 61-60. Rice got fouled shooting for Boeheim’s Army and made one free throw. Jones came down and put on a nice move for a floater in the lane to tie it up 62-62. McCullough fouled Keith Clanton on a shot and Clanton made both free throws. Rice cut into the lane for a nice shot tying the game at 64. A Kenny Boynton miscue led to a steal by Rice who would run the length of the floor to lay it in to win it for Boeheim’s Army.

Team 23 advanced to the Championship game in The Basketball Tournament over Blue Collar U, winning 78-62. Team 23 was led by Marcus Hall’s 16 points and 2 rebounds. Walt Lemon followed him with 15 points, 5 rebounds, 4 assists, and 2 steals. Eric Griffin was the last double-digit scorer with 15 points, 7 rebounds, 2 assists, and a block. On a very offensively efficient day, Team 23 shot 52% from the floor.

Lamonte Bearden faked him out & got the layup!!!!!!@BlueCollarUTBT is still in this on ESPN pic.twitter.com/p4Okbqr9F2

Blue Collar U put up a great fight in the first half, but couldn’t match Team 23’s second half. Blue Collar U was led by Lamonte Bearden’s 22 points, 5 rebounds, 3 assists, and 2 steals. The only other double-digit scorer was Nick Perkins with 12 points, 4 rebounds, and 1 assist. C.J Massinberg finished with 9 points, 8 rebounds, 1 assist and 1 steal.

A huge three for Eric Griffin to end the third 💦💦

Target score set the Elam Ending at 78 as Team 23 led Blue Collar U 70-55 in The Basketball Tournament semifinal matchup. Davonta Jordan fouled Daniel Ochefu who made one-of-two free throws. Nick Perkins and Eric Griffin got in a scrum after a rebound and both were ejected. Raphiael Putney got an offensive rebound off a miss by Walt Lemon and put it back and got fouled, making both shots from the line.

Marcus Hall came down and puts up a floater to put Team 23 just two points away from the win, leading 76-58. Bearden got fouled by Putney while shooting. Bearden made both his free throws. Davonta Jordan made a dunk to make the score 76-62. Marcus Hall cut into the lay-in for Team 23 to advance to the championship game of The Basketball Tournament. Team 23 will face Boeheim’s Army on Tuesday, August 3rd, at 8 p.m. CST.