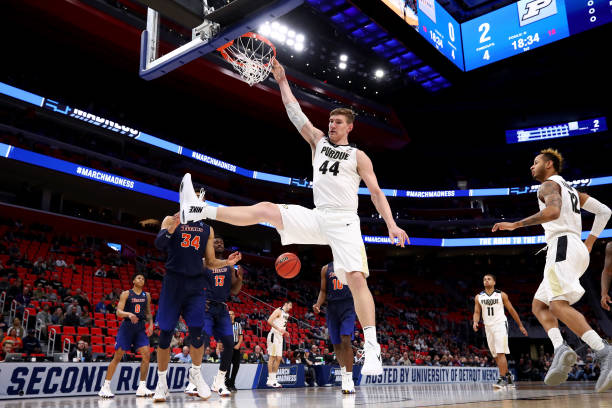 The Basketball Tournament is often overlooked because of top-heavy teams, but don’t count out these rosters.

Teams like Boeheim’s Army, Carmen’s Crew, and Eberlein Drive always headline The Basketball Tournament. However, as with any single-elimination bracket, all a team needs is one game to advance.

This year the field is as stacked as ever with 64 teams competing for the chance at $1 million. These ten teams might not be first on your radar but certainly, have the chance to win more games than expected.

The Enchantment will have one of the most challenging second-round matchups, with Eberlein Drive as the most likely team they would face. So if the New Mexico alumni team gets past Stillwater, any more wins would make it the biggest Cinderella story in TBT history.

This team is intriguing due to two players that could get hot at a moment’s notice. Anthony Mathis shot close to 50% from three his junior year with New Mexico and was a near double-digit point per game scorer at Oregon.

At 36, J.R. Giddens is one of the oldest players in The Basketball Tournament. However, he averaged 13.3 points per game split between two seasons each at Kansas and New Mexico and an NBA career that lasted three seasons. If he can turn it back a notch, it gives The Enchantment two players with the ability to score 20+ points in a game.

The Creighton alumni team is seeded 10th in the Wichita region and will play Purple & Black (Kansas State). Even though Omaha Blue Crew is the higher seed, they look better on paper.

Starting with a non-Blue Jay, Admon Gilder may have the biggest impact on this team. He played at Texas A&M for three years and Gonzaga in 2019-20. His career averages of 10.7 points, 2.0 assists and 1.1 steals per game show what he can bring to the team on both ends of the floor.

Former Jays sharpshooter Martin Krampelj will also be a player to watch. The 6-foot-9 stretch forward is efficient inside the paint and outside the arc and also has a good defensive presence.

Like The Enchantment, a first-round win would set up a nearly impossible task, with AfterShocks most likely next in line. However, between Gilder and Krampelj, it’s a team that can get hot and forces turnovers, two really good qualities to have in a single-elimination tournament.

Another team from the Wichita Region, Team Arkansas has a lot of things going for them. As a 6-seed they have a favorable matchup against 11-seed Forth Worth Funk. After that, a potential game against 3-seed Team Challenge ALS seems very favorable.

Dusty Hannahs is the impact player to watch for Team Arkansas. The 6-foot-3 inch guard is physical and a flat-out scorer, where he put up 16.5 points per game as a junior with the Razorbacks.

Jimmy Whitt is another guard who can offer scoring and Markel Crawford should add to that as well as rebounding from the guard position.

Sonny Weems is the GM which also seems like this team is headed in the right direction. Weems played almost 200 games in the NBA averaging 6.5 points for his career. His basketball knowledge could propel Team Arkansas to the Sweet 16 in The Basketball Tournament this summer.

Maybe it’s because it’s Wolf Blood’s first year competing in The Basketball Tournament, but the NC State Wolfpack alumni team is arguably a few seed lines better than a 7-seed. If both lower seeds advance, they’d play Dayton’s Red Scare in the round of 32. I’d have to think the guard play of Wolf Blood would put them through in that matchup.

Torin Dorn is really listed as an undersized small forward, but make no mistake about it, he’s a competitor and a scorer. His senior year at NC State was his best, averaging 14.0 points and 7.2 rebounds per game. On an undersized team, he’ll have to come up big on the glass.

Helping out Dorn is a good duo of Abdul Malik-Abu and Trevor Lacey. Malik-Abu is the lone center on Wolf Blood and will have to be strong on the boards for this undersized team to advance. Lacey graduated from NC State in 2015 and will have to turn back the clock a bit and revisit his college days. They will be crucial in helping Dorn and if they can come up big, Wolf Blood can make a deep run.

Tubby Time was replaced by Chicago Hoopville Warriors just after our graphic for this article was released so in comes Ballinteers. I initially kept them off this list since I have them out in round one, but if they do advance, there’s no reason why they couldn’t make a deep run.

Lofton is one of the best bucket getters to watch in The Basketball Tournament. He wore a Tennessee jersey from 2004 to 2008, but good scorers never lose their touch. Lofton averaged 16.6 points for his career, which 20.8 being his career-high for a season. He earned two All-American nods, so Lofton has some of the most hardware of any guys in TBT.

Turner is a guy who will go on the court and do all the little things and shouldn’t be overlooked as a scorer. Chism’s also an older player, his college career having ended over a decade ago.

It makes me a little nervous knowing some of Ballinteers’ go-to guys are well into their 30s, but if their legs are fresh and ready to go, the skill is there. If only Scotty Hopson joined the team!

Heartfire will have a tough time advancing far, with Boeheim’s Army and House of Paign both on their side of the bracket. However, I am picking the 11-seed to upset Overlooked (Murray State) in the opening round.

Heartfire is the first team on this list that can’t be boiled down to just two or three players. Instead, it’s a whole squad, with Branden Dawson, Cory Jefferson, King McClure and Tweety Carter all set to have big roles.

Former Nevada Wolf Pack star Brandon Fields is an unheard-of name who will also have a huge role on Heartfire.

The biggest drawback to Heartfire is their lack of a surefire star and go-to player. I tend to think either Dawson or Jefferson will hold that role, but you just don’t know who it will be, which scares me a bit with the Elam Ending.

Buffalo basketball has just recently started becoming a household name, but that doesn’t matter in The Basketball Tournament. TBT is all about recent stars and Buffalo’s had as many as any mid-major team in the past half-decade.

Blue Collar U hasn’t played in TBT yet, but it won’t matter. Starting with C.J. Massinburg, they have a blend of players that can score the ball. Don’t be surprised if they put up over 100 points in a game.

Massinburg was on the Buffalo team that upset Arizona in the 2018 NCAA Tournament. He had 19 points in the game, 8 of them coming in the first four minutes of the second half. That type of scoring energy is indispensable in The Basketball Tournament.

Jeremy Harris had 23 points in that same game and is also on this team. The chemistry between him and Massinburg is undeniable and poses a scary threat to the other teams in Blue Collar U’s region.

Davonta Jordan, Dontay Caruthers, Justin Moss, Nick Perkins and Wes Clark are all other players from the same era. Clark led the Bulls in scoring over Arizona but was only tied for third on the team for the season. That shows you all you need to know about how dangerous this team will be.

Bleed Virginia might be an unpopular pick here because their team will likely rely on two players, but if they get going, it’ll be one of the best duos in TBT.

Ed Polite Jr. was a do-it-all player for Radford where he ranks top ten in nearly every category in the history of the program.

However, all the attention will be on Reggie Williams. The former VMI product averaged 28.1 points and 27.8 points during his junior and senior seasons. That was almost 15 years ago, but if he still has some gas left in the tank, he could be one of the most unguardable players in the entire field.

Polite Jr. is the perfect scrappy wingman for Williams so if they gel, watch out.

Another under-the-radar team, SCD Hoops is a 12-seed pitted against Autism Army in round one and potentially Always Us (Oregon) in the second round. I personally like their first-round matchup and the Oregon team doesn’t have as many great Ducks as you might think, giving SCD Hoops a good chance at another upset.

Billy Garrett Jr. is one of the men to watch on SCD. The DePaul product is a lethal guard who scores and gets teammates involved. He is prone to turnovers, which is one of his very few downfalls.

D.J. Hogg is the other player who could be boom or bust for SCD. At 6-foot-9, he only grabbed 4.3 rebounds per game for his college career, but the Texas A&M product had some big outbursts that show he can go off at any time. Career highs of 25 points and 10 rebounds prove he can do it at a high level. As long as that rings true, SCD will move on.

Men of Mackey is an 8-seed with former TBT champion Carmen’s Crew in their way. I have them going to the championship. That’s how good and undervalued this Purdue alumni team is.

On the boards, Men of Mackey will be virtually unstoppable, a testament to what Purdue basketball is all about. The trio of Robbie Hummel, Isaac Haas and AJ Hammons offer THREE big men who each averaged at least 14 points in a season once in their Boilermakers careers.

At guard and on the wing, Evan Boudreaux, Frank Gaines and Jonathan Octeus will handle the ball and offer plenty of scoring in different ways. Boudreaux can knock down shots and never takes a play off. Gaines played at Purdue-Fort Wayne and averaged 15.0 points for his career. Octeus plays both sides of the ball.

Make no mistake, this is a 2-seed in an 8-seeds body. Men of Mackey has what it takes to cut down the nets at The Basketball Tournament this summer.

One thought on “The Basketball Tournament: 10 Sleeper Teams”